Eight years ago, fresh off passing the Affordable Care Act, Democrats controlled the Senate. And it was Ben Nelson, the two-term Democratic senator from Nebraska, who provided the final vote for President Obama’s signature health care bill. But Nelson, who was hardly a reliable Democratic vote, decided not to run for office again, making him one of 18 Democratic senators who did not seek another term between 2010 and 2014. This proved a significant turning point in the Senate for Democrats, however, because half of these seats would be filled by Republicans.

What do 1,200 books about Trump really tell us? | FiveThirtyEight Politics Podcast

In Nebraska, for instance, Democrats nominated Bob Kerrey, a former U.S. senator and Nebraska governor, who consistently had an approval rating upward of 70 percent when he governed the Cornhusker State. But even though he was a high profile Democrat in the state, he lost by 16 percentage points to his opponent, a relatively unknown Republican state senator, Deb Fischer. Kerrey did win the state’s two most populous counties, but not much else, which has now become an all too familiar pattern for Democrats running in Nebraska.

“When that happened in 2012, I said, ‘Something’s changed,’” said Chris Rodgers, a Douglas County commissioner. Rodgers told me that Kerrey’s large margin of defeat made it clear that “it’s just a whole lot harder” for moderate and liberal candidates to win in Nebraska than it used to be.

[Why A Split Verdict In Georgia Isn’t That Crazy]

In the three Senate races in Nebraska since 2012, Democrats have lost by 30 points, on average (or roughly double the margin of Kerrey’s defeat). And in my new book “Rural Rebellion: How Nebraska Became a Republican Stronghold,” I unpack how this happened in Nebraska and why the state’s rightward shift underscores the difficulties Democrats face in gaining and maintaining a Senate majority — regardless of what happens in Georgia’s Senate runoff elections next Tuesday.

When I was born in David City, Nebraska, in 1989, I entered a world where Nebraska straddled the middle of the political spectrum. But since then, the state has drifted so far from the center it’s hard to remember it was ever there. Using DW-NOMINATE data from the congressional vote tallying website Voteview, we can see just how far Nebraska’s political representatives have drifted rightward in the last thirty years. As you can see in the chart below, the average ideology score of Nebraska’s U.S. representatives and senators, as measured by DW-NOMINATE’s first dimension, shifted more than half a point between 1990 and 2020.1 Put in today’s terms, in 1990, the average Nebraskan in Congress was similar in ideology to outgoing Democratic Sen. Doug Jones of Alabama, a moderate; whereas today she would more closely resemble Texas Republican Sen. John Cornyn, who isn’t the most conservative Republican in Congress (that’s Sen. Mike Lee), but still drifts pretty far to the right on the ideological spectrum. 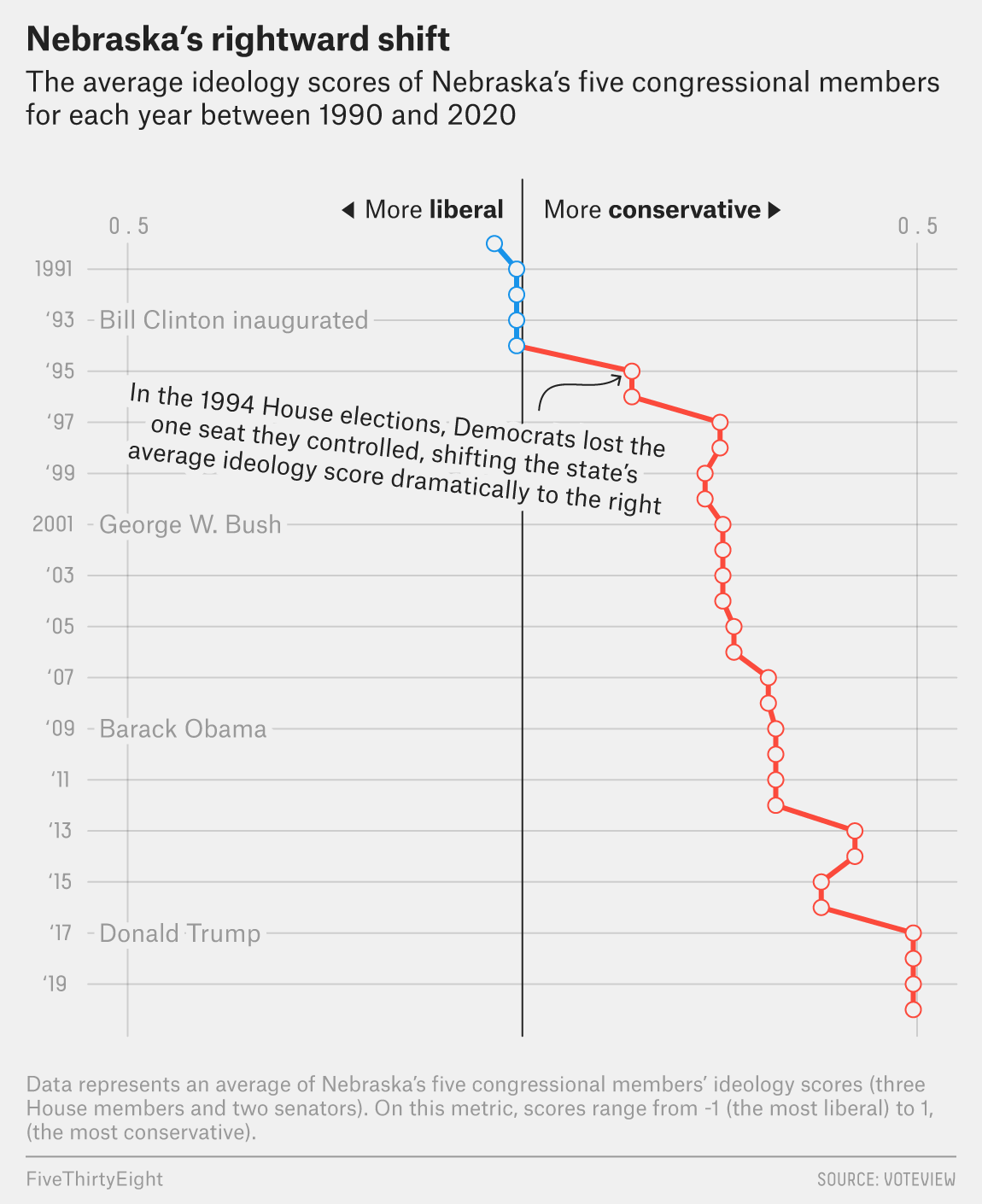 As FiveThirtyEight contributor Lee Drutman wrote earlier this year, the Electoral College has always favored smaller states like Nebraska. But it is only somewhat recently that these states have heavily favored Republicans.

Nebraska’s rightward shift matters because it’s reflective of a broader, national trend in lower population states that has created an imbalance in the Senate. We can see this in FiveThirtyEight’s urbanization index, which captures how urban or rural an area is by calculating the natural logarithm of the average number of people living within a five-mile radius of another resident. Nebraska is less densely populated than the average state and is one of the 25 states (all on the right side of the table) that only accounts for about a quarter of the U.S. population, yet will provide 40 Republican senators and just eight Democratic senators (and two independent senators who caucus with Democrats) in the upcoming congressional session.

Simply put, this increasingly firm grip Republicans have over less populated states doesn’t bode well for Democrats trying to win back the Senate. That’s because in many statewide elections, running up the margins in the cities isn’t enough to win. For instance, even though Nebraska’s two most populous cities, Omaha and Lincoln, are gaining in population and lean left compared to the rest of the state, Republican power remains entrenched in the state. Take the 2018 reelection bids of Gov. Pete Ricketts and Fischer, who both lost Douglas County and Lancaster County but still won their races by double-digit margins. Similarly, Trump lost Nebraska’s two most populous counties in November, but he still won the state’s other 91 counties, putting him well on his way to winning about 60 percent of the state’s total vote. In fact, Republicans routinely win in Nebraska because voter turnout is highest in rural areas, which also have a higher median age and strongly lean Republican.

So what’s driving Nebraska’s (and other states’) rightward shift? In part, it has to do with the nationalization of American politics. Since the 1990s, Democratic voters have moved to the left on issues such as health care and immigration, while Republicans have become more likely to identify as conservative as their moderate candidates have dwindled. And in turn, this nationalization and polarization has made it more difficult for local candidates to successfully create their own platforms. For example, as governor and senator, Nelson often broke from his own party in an attempt to attract conservative voters, taking stances like advocating for a “hard barrier” to prevent illegal immigration or supporting various anti-abortion measures. But the days of candidates creating their own platforms are largely over, and the share of registered Democratic voters in Nebraska has also dropped.

[Why Many Pollsters Are Sitting Out The Georgia Runoffs]

The effect of nationalization in Nebraska is evident in how politicians have changed their approaches on issues like immigration and education to better align with the national Republican Party’s agenda. Take how far to the right Nebraskan politicians have moved on immigration. In the late 1990s, former Republican Gov. Mike Johanns opposed a raid on meatpacking plants in Nebraska by Immigration and Naturalization Services, and in 2003, former Nebraska Republican Sen. Chuck Hagel cosponsored the DREAM Act, which sought to provide a pathway to citizenship for immigrants who entered the U.S. as minors. But Nebraska’s current governor, Pete Ricketts, has bitterly fought to prevent “Dreamers” from obtaining driver’s licenses, and the state attorney general has gone as far as to sue the federal government to end the Deferred Action for Childhood Arrivals program.

This trend extends to lower levels of government, too, like the state legislature and city councils. Republican state lawmakers have also tried to eliminate prenatal care and repeal in-state tuition for immigrants, while giving local police the power to question the immigration status of anyone they suspect of living in the country illegally. A few towns have even passed ordinances that formally ban undocumented immigrants from renting property. All this is happening in a state that, until recently, settled a high number of refugees.

Meanwhile, on the education front, Republican lawmakers have leaned into national Republicans’ growing aversion toward public education, trying to eliminate Nebraska’s democratically elected board of education, while perpetual tax cuts and exemptions have led to two-thirds of Nebraska’s school districts receiving no general financial assistance from the state, which has contributed to public schools in rural Nebraska having “the most inequitable [state aid] distribution in the nation,” according to a nationwide study by the think tank, The Rural School and Community Trust. This is all in a state where Republicans once implemented income and sales taxes to increase K-12 schools’ funding, among a host of other progressive legislation.

But lest one think the effects of nationalization have completely remade states like Nebraska, many Nebraskans disagree with the GOP’s positions. Through ballot initiatives, for instance, Nebraska voters have approved a higher minimum wage, Medicaid expansion and casino gambling, even though Republicans officials, who continue to cruise to statewide victories, have opposed these measures.

It might seem paradoxical that Nebraskans, especially those in rural areas, identify with and vote for Republicans despite the opposition of GOP officials on some popular issues. But because local politics have become so nationalized, the Nebraska Republican Party (and the state Democratic Party for that matter) is apt to follow the national party’s lead, even if it puts them at odds with local voters.

“If you ask people to vote for things that might be in their own interest, and you explain the issue to them in one paragraph on the ballot, they will vote for the thing that is good for them,” said Ari Kohen, a professor of political science at the University of Nebraska-Lincoln. “But you can’t ask them to give up their party affiliation.”

People are reluctant to switch parties, but they can be swayed to change their mind about a specific cause, particularly when an issue is presented outside of a partisan context. State Sen. Tony Vargas, a Democrat in Omaha, told me that he thought Medicaid expansion passed — even though Nelson encountered a brouhaha over a similar issue just eight years prior— because it wasn’t tied to a particular politician or party. “If our ballot said ‘expanding Obamacare,’ I feel like people would have voted against it,” Vargas said. “Instead, we said ‘expanding Medicaid and addressing the gap.’ … It’s a lot harder to attack the issue. It’s much easier to attack the person.”

Nebraka’s ballot measure successes provide some hope for Democrats who feel handcuffed in passing legislation in conservative states. But ballot measures aren’t a replacement for putting your preferred party in office. And if Democrats are to ever regain a filibuster-proof coalition in the Senate, they’ll probably need to pick up more candidates like Nelson in low-density states.

Dr. Fauci on life post-vaccine and Biden’s approach to the pandemic | FiveThirtyEight

Ross Benes is the author of “Rural Rebellion: How Nebraska Became a Republican Stronghold.” @RossBenes