Carly Fiorina has climbed out of the basement.

Since her strong performance in the Fox News JV debate on Aug. 6, she’s consistently polled in the middle tier of the 17-strong GOP primary field. But Fiorina needs more good polling to earn a spot in CNN’s varsity debate next month and avoid being stuck in the “segment A” debate with the lowest-polling candidates.

CNN has said its main debate on Sept. 16 will include the top 10 candidates in an average of polls released between July 16 and Sept. 10. That means the CNN average will include polls published three weeks before Fiorina made a splash in the first debate. She earned 2 percent or less in all nine of those polls.1

Considering all the polling out right now that CNN will use for its average, Fiorina is at just 1.64 percent. 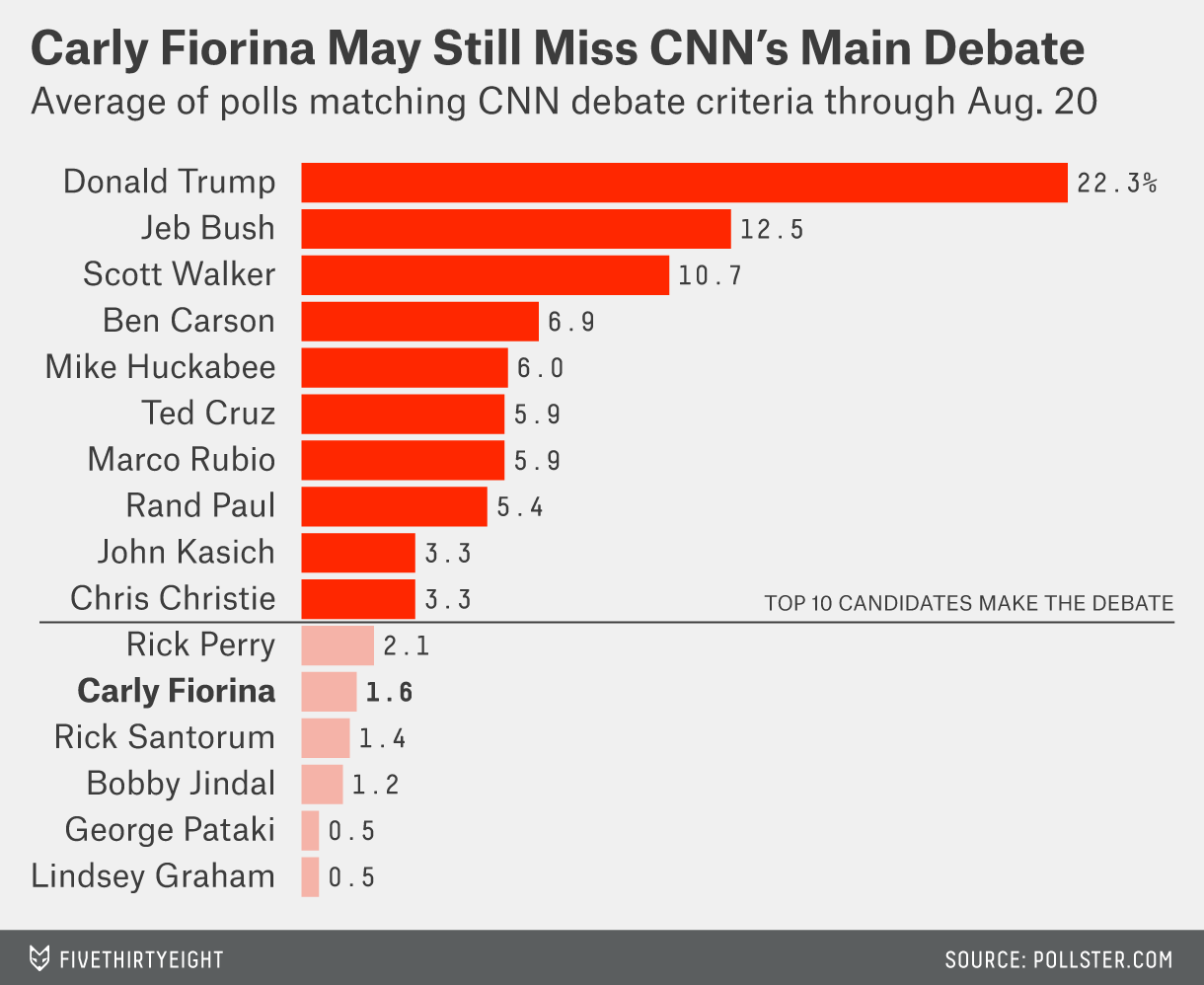 So how many more good polls does Fiorina need to make the main stage? We can calculate how Fiorina’s standing and that of the candidates currently tied for the final spots in the debate — John Kasich and Chris Christie — would be affected as additional polls are released, assuming the results match the average of the post-debate polls that are already out (and that assumption may prove wrong).

To earn a spot in the debate, Fiorina would likely need nine more polls released over the next 20 days whose average result matches the two most recent national polls. That would put her in a tie with Christie (who has polled lower than Kasich since the Fox News debate and so would fall behind him if current polling trends continue). And Fiorina would win the tiebreaker against Christie, which CNN has said will be an average of the polls released between Aug. 26 and Sept. 10.

Can Fiorina expect nine new polls to come out in the time remaining?

During the 20 days leading up to the polling cutoff (Aug. 4) for the Fox News debate, there were exactly nine polls released matching CNN’s polling criteria. In other words, it could be a very close call.

One could argue for or against CNN’s decision to use such a long period for its debate average. On the one hand, a longer period ensures that no one poll has an outsized effect and that flavors of the month (see all the Republican candidate spikes in the 2012 cycle) aren’t given too much credence. On the other hand, at this point in the campaign, the longer period gives candidates who started out with higher name recognition an advantage because they are more likely to have better numbers earlier in the campaign. And some would argue that populating a debate stage with the candidates who are better-known precludes voters from being able to use the event to get to know the more obscure hopefuls.

Either way, we’re a long way from knowing who will win the 10th spot at CNN’s main debate. Fiorina needs two things: She needs to keep doing well in the polling and for a lot of new polls to come out. Fiorina has been doing better in recent polling, but that might not be enough.