Welcome to The Riddler. Every week for the last four years, Oliver Roeder has offered up problems related to the things we hold dear around here: math, logic and probability. I will do my best to continue that legacy as The Riddler’s new editor.

As you may know, two puzzles are presented each week: the Riddler Express for those of you who want something bite-size and the Riddler Classic for those of you in the slow-puzzle movement. Submit a correct answer for either,1 and you may get a shoutout in next week’s column. If you need a hint or have a favorite puzzle collecting dust in your attic, find me on Twitter.

You and your friend are playing a game of “Acchi, Muite, Hoi” (or what some on Twitter have been calling the “lookaway challenge”). In the first round, you point in one of four directions: up, down, left or right. At the exact same time, your friend also looks in one of those four directions. If your friend looks in the same direction you’re pointing, you win! Otherwise, you switch roles as the game continues to the next round — now your friend points in a direction and you try to look away. As long as no one wins, you keep switching off who points and who looks.

The U.S. Open is upon us! Dave Moran and Erich Friedman each submitted a tennis-themed puzzle that asked what it really takes to succeed in the tournament.

You know, I thought tennis scoring was pretty straightforward until I had to write it down.

Longtime puzzle editor Oliver Roeder’s tenure concluded with the fourth (but certainly not final) installment of the Riddler Nation Battle Royale. Here is how he described the rules: In a distant, war-torn land, there were 10 castles. There were two warlords: you and your archenemy. Each castle had its own strategic value for a would-be conqueror. Specifically, the castles were worth 1, 2, 3, …, 9 and 10 victory points. You and your enemy each had 100 soldiers to distribute, in any way you like, to fight at any of the 10 castles. Whoever sent more soldiers to a given castle conquered that castle and won its victory points. (If you each sent the same number of troops, you split the points.) You didn’t know the distribution of the enemy forces until the battles began. Whoever won the most points won the war.

You submitted a plan distributing your 100 soldiers among the 10 castles. I took all these battle plans and adjudicated every possible one-on-one matchup.

I received more than 1,000 battle plans, of which more than 900 were valid.2 Here’s a graphic that shows the strategies of all those entries: 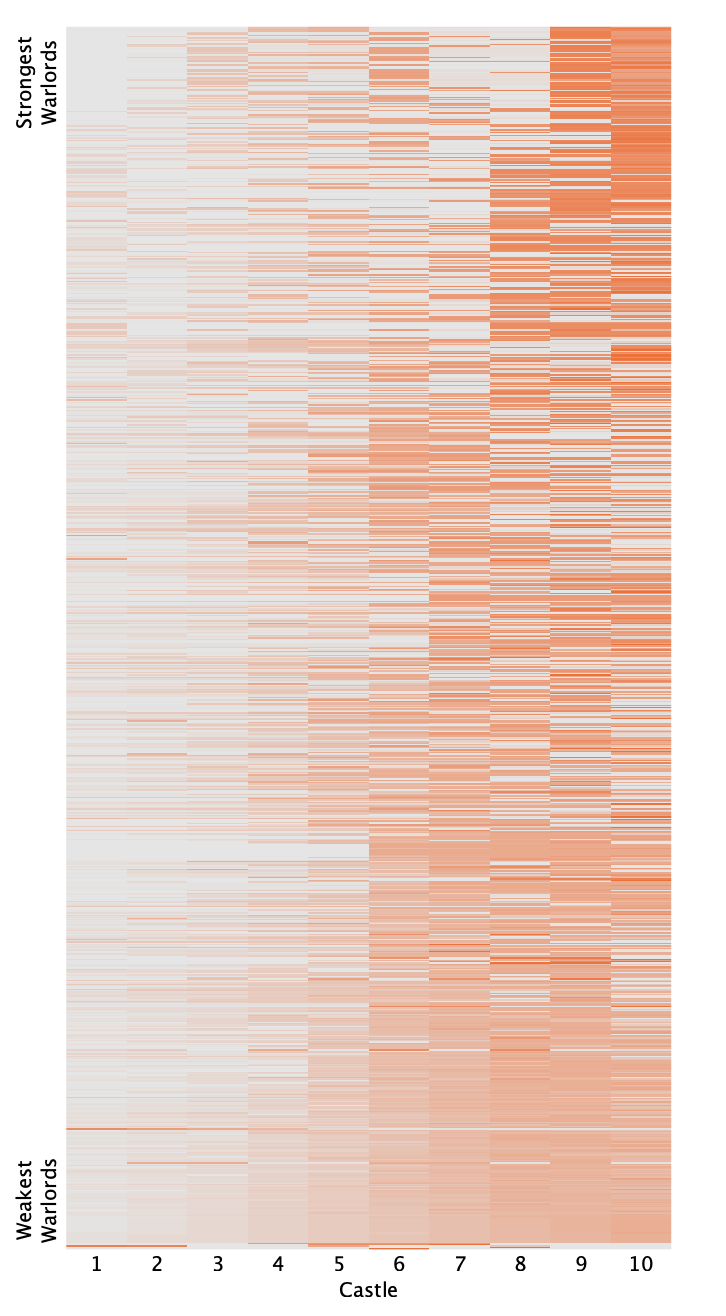 Each row is a different warlord (the best warlords are at the top, the worst are at the bottom), and each column is a different castle (1 is on the left, 10 is on the right). Castles with more soldiers are shaded darker. The 10 castles are collectively worth 55 points, so to win a match you needed to collect at least 28 points. At a glance, you can see that strategies where soldiers were more evenly distributed didn’t fare as well, while the strongest warlords focused their efforts on collecting exactly 28 points in each match. Sure enough, the best warlords placed most of their soldiers on castles 4, 5, 9, and 10, which together are worth 28 points.

Here were the top performers:

As noted in the table, former two-time top warlord Vince Vatter did well, but not well enough to retain his title. I’m sure Vince will exact revenge in the next battle.

There’s a lot of data to digest here, so I hope all you aspiring warlords learn from our winners! If you have ideas for tweaking the rules to mix things up (e.g., 13 castles instead of 10, as Vince has suggested), let me know. Surely, Riddler Nation won’t have a second two-time champion…