I live in one of those weird time warps where I get to hear about Meet the Press hours before I get to watch it on my local affiliate, but if what Halperin says is correct, this strikes me as pretty significant:

Clinton campaign chair McAuliffe, who some consider the greatest chairman in the history of the Democratic Party, said the race isn’t over and laid out Clinton’s path to the nomination (”Anything can happen.”), including predicting Clinton would win the popular vote. He said he would accept an agreement in which Florida and Michigan got half their delegates seated at the convention, based on the primary results. Said Clinton would continue through the end of the primaries, and looked towards the DNC’s Rules and Bylaws Committee.

In terms of the delegate math, this proposal is essentially identical to the one advanced by Michigan’s party leadership, which would split that state’s delegates 69:59. Allocating results based on the primary instead, but cutting the numbers in half (and giving Obama credit for all of Michigan’s uncommitted delegates) would make things 36.5:27.5. The former nets Clinton a 10-delegate advantage and the latter a 9-delegate advantage.

There’s inevitably some angle I’m missing here, but I don’t see why the Clinton campaign would filibuster a plan that would get them a 10-delegate swing in Michigan but be amenable to one that would get them a 9-delegate swing. Perhaps they think doing things this way would tend to legitimate the popular vote in Florida and Michigan, but acknowledging that Florida and Michigan’s delegates should be halved would seem also to acknowledge that the popular votes cannot quite be taken at face value. Since there is no such thing as an official popular vote count, perhaps some news organizations would wind up halving the popular votes in Florida and Michigan too. That would put Clinton about 535,000 votes behind. If I make ridiculously optimistic assumptions for Clinton I have her netting 120,000 votes in West Virginia, 135,000 in Kentucky, 270,000 in Puerto Rico, losing 25,000 in Oregon, and splitting the other two states. That works out to 500,000 votes, still not enough to win her any of the more credible versions of the popular vote count, nor a version that counted Florida and Michigan as half votes.

As I said, there must be something I’m missing. Perhaps their angle is that they’ll attempt to characterize Michigan’s uncommitted delegates as in fact being uncommitted rather than Obama delegates, even though those ghostie delegates have in fact become actual human beings, and all or almost all of them have in fact committed to Obama. (If they accepted Michigan’s plan, those delegates would be officially and unambiguously assigned to Obama). Perhaps McAuliffe spoke out of turn. There’s always been the sense that he’s not quite as willing as someone like Harold Ickes or Lanny Davis to go completely down with the ship.

But the Obama campaign should seriously consider taking the halvsies deal, which will certainly allow them to clinch a plurality of pledged delegates on May 20th, and quite probably an outright majority — see Scenario H in the table below. 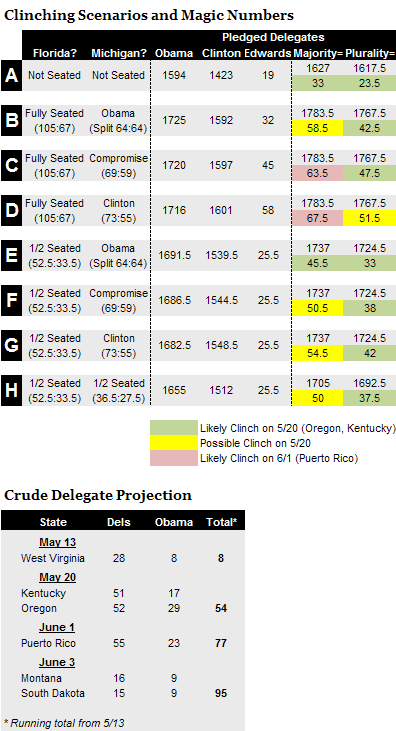