The answer to the question in the headline, of course, depends on just who you ask. 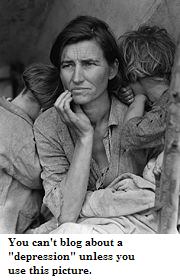 According to a USA Today/Gallup poll conducted last month, 35 percent of Americans think that a “depression” — which the poll defines as “an economic downturn that is much more severe than most recessions and would last several years” — is very likely, and another 39 percent think it’s at least somewhat likely.

This, however, is a relatively vague definition of a “depression”. If, for example, real GDP declined by 4 percent in 2009, a further 2 percent in 2010, and then held steady in 2011 before finally beginning to recover in 2012, that would be by far the worst economic slump since World War II and would meet the USA Today poll’s definition of a depression. And there are various other signs and symptoms that we might describe as “depressionary”. For example, if unemployment were to hit double digits, or there was a run on one or more major commercial banks, or there was severe price deflation on the order of, say, 4% for a couple of quarters, some people might consider those things to be evidence of a depression, and we’d begin to see the term thrown about more casually.

But there is a somewhat more precise definition of a depression (although by no means is it one universally agreed upon by economists): that is a 10 percent decline in real GDP over the course of a year or more. This is the definition that the predictions market Intrade uses. And the latest trade at Intrade just put the chances of a depression occurring at some point in 2009 at 40 percent — or about ten times more likely than the odds that Norm Coleman prevails in his election lawsuit in Minnesota. 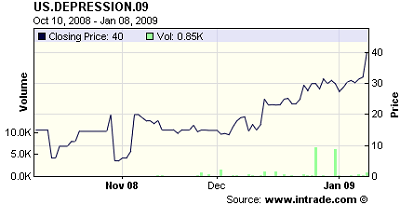 This is a shockingly high figure, both on its face and because I’m not sure that even the most pessimistic economists would place the chances of a sustained 10 percent decline in GDP at anywhere near 40 percent. The Wall Street Journal, in fact, just completed its monthly economic forecasting survey, a panel of 55 professional and academic economists. The most pessimistic forecast from among the 55 panel members is that the economy will decline by 2 percent in 2009, with the consensus forecast being exactly zero percent growth: 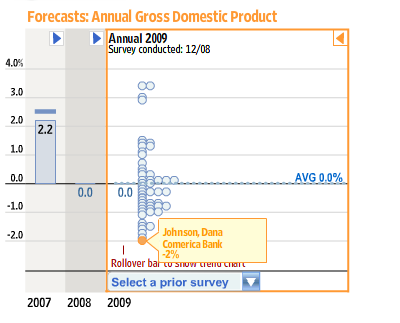 One can find room to criticize the composition of the Journal‘s panel: it probably does not contain enough liberal economists, and almost certainly does not contain enough what you might call nontraditional economists — behaviorists or mathematicians or people that think, quote-unquote, “outside the box”. Nevertheless, this represents quite a large difference of opinion with the Intrade forecast.

(A technical aside: the economy would meet the Intrade definition of a depression if it declines by 10 percent over any four consecutive quarters ending in 2009 — for example, 4Q 2008 through 3Q 2008. So it’s possible that you could have an Intrade depression even if the economy didn’t decline by 10 percent in 2009 proper. The most pessimistic forecasts for quarterly decline in GDP in the Journal survey are 6.2 percent for 4Q 2008 and 5.0 percent for 1Q 2009, still far away from a sustained 10 percent decline in GDP over four consecutive quarters.)

The Journal and Intrade, of course, are not the only source of economic forecasts. The Congressional Budget Office expects GDP to decline by 2.2 percent (.pdf) in 2009 — but this is explicitly if no stimulus package of any kind is passed. And then there is the stock market, which at its trough had declined by about 45 percent from its summer 2007 peak and is now at more like 35-40 off its peak. The market seems to have priced in a fairly steep recession — but probably nothing like a depression (the DJIA declined by almost 90 percent from peak to trough in the 1930s).

So do these Intrade folks know something that the rest of us don’t? And if not, where do they get off?

As you may know, I am not the biggest fan of Intrade, which I think is a terrific concept in theory but simply does not have the liquidity to sustain efficient prices in the short-run. This is especially true when it comes to the economy. If you thought we were headed toward the next Great Depression, you could make much, much more money by shorting industrial stocks than you could by betting on one at Intrade.

From what I understand about Intrade, however, a lot of the money that is to be made there comes from people who are trying to anticipate future price movements rather than the ultimate resolution of the contract. Say that I think the true chance of a depression is 4 percent, not 40 percent — I should still buy depression contracts at 40 percent if I think I can sell them for 50 percent when the new jobs report comes out on Friday.

This characteristic is arguably true of all markets, of course, and it is one of the reasons that bubbles develop. But I’d guess that it’s especially true of Intrade, where the ratio of fish to sharks (to borrow from poker terminology) is relatively high, as a lot of people participate in Intrade for recreation rather than for profit. To get a bit more technical about it, I’d guess that the possibility for “bubble profits” increases as some nonlinear function of the proportion of dumb money in a particular market, and that the possibility for bubble profits, moreover, tends to beget bubbles, producing some sort of condition of multiple equilbria.

What the Intrade traders may be betting on, in other words, is other traders becoming more pessimistic at some point between now and close of the contact — a “pessimism bubble”, if you will.

But here’s the real question. Is there a risk of a “pessimism bubble” in the real economy? And if so, are the real markets and the professional forecasters adequately accounting for it?

What will happen, for instance, when the government releases its 4Q GDP estimate? It’s going to be an ugly number: -2% if we’re lucky, and maybe -6% or worse if we aren’t. When this occurs, there will be an awful lot written about it. While the stock market has perhaps priced in this expectation, individual consumers and individual businesses perhaps have not. If they perceive the world as crashing all around them, they may behave in such a way as to actually beget such a catastrophe. We’re already to the point where you can’t read the food section or the sports section of the New York Times without reading about the recession.

The advance estimate of 4Q GDP is due out on the 30th, timing that intersects in interesting ways with the period during which the Congress is hoping to pass the stimulus package. The number the BEA announces will almost certainly be the worst figure since 1990, when the economy declined at an annualized rate of 3.0 percent in the fourth quarter, and will quite possibly be the worst since the first quarter of 1980, when the economy experienced a 6.6 percent decline. The headlines in the newspapers the next morning will be very grim. A good time for the stimulus to pass, arguably, would be within a few days of the BEA’s announcement. Obama could hold an evening press conference after signing the stimulus bill, doing his best to allay the fears of a worried nation — for fear itself is something we very much do have to fear.