At a press conference in New York City on Saturday, Mayor Bill de Blasio brought along a bar graph that he said represented the evidence necessary to show that a lethal outbreak of Legionnaires’ disease had passed. And that graph, familiar to those who work in public health, turns out to be a very reassuring sign.

The graph is called an epidemic curve. Here is what the city’s epi curve currently looks like, a slight update from the one shown at the Saturday press conference: 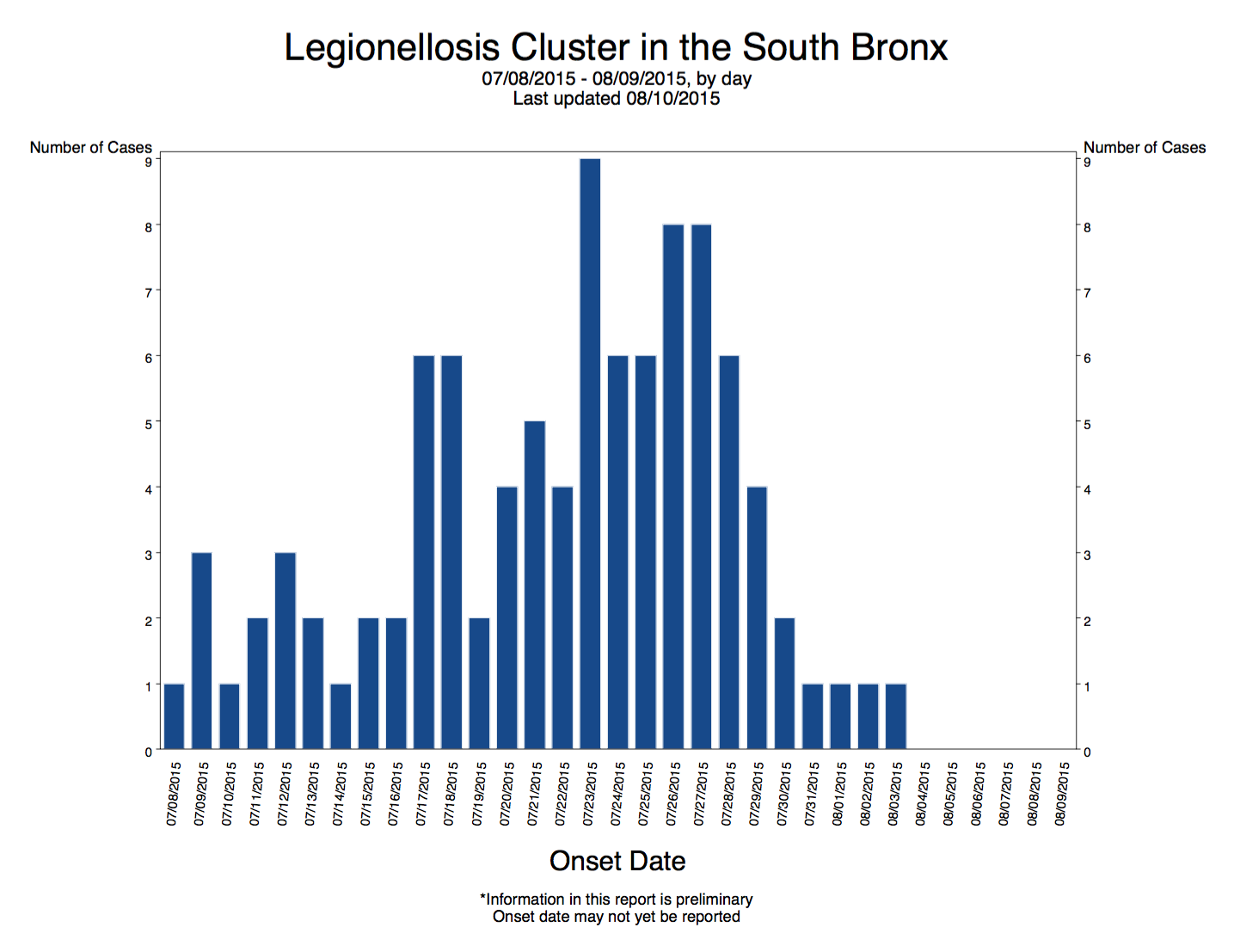 An epi curve is a tool frequently used in epidemiological investigations, charting when people get an illness over time. It’s easy to create once you have the data (the Centers for Disease Control and Prevention has a lesson on how to make one here) and looks like any old bar chart. But an epi curve contains a lot more information than just an x- and y-axis. In the midst of an outbreak, it can help identify the source of a disease, its incubation period (the time between infection and the onset of symptoms), and, perhaps most importantly, when it might be over.

The current outbreak of the severe form of pneumonia has been the biggest and deadliest in the city to date; 12 people have died, and 113 cases have been reported. We already know from previous outbreaks that the incubation period for Legionnaires’ disease usually ranges from two to 10 days. So even though a few new cases appeared through the weekend, the city believes the last infection actually occurred Aug. 3. Understanding when infections happen helps investigators home in on the source.

The shape of this curve, which shows a more or less continual accrual of cases and then a relatively fast drop-off, makes a pretty clean-cut case that the outbreak mostly came from a single source that has since been removed. Cases grew and grew until the bacteria stopped being a threat and then dropped off sharply. The city originally identified five cooling towers in the Bronx that tested positive for Legionella bacteria (the bacteria that causes Legionnaires’), and although it has since found other sites, it believes the outbreak is linked to one of those first five.

(A city official told The New York Times that the evidence pointed to a hotel as the most likely source. The hotel says it cleaned its cooling tower on Aug. 1 after it tested positive for the bacteria, a timeline that fits relatively well with the curve’s drop-off.)

Studies have found that cooling towers are one of the most common harbors for Legionella bacteria (as are whirlpools, water systems and public fountains). They have been found to host the bacteria even when cleaned regularly. They cool by releasing mist into the air, and when bacteria are present, the towers aerosolize them. Once the bacteria are in the air, it is particularly dangerous for people who have compromised immune systems or breathing problems like emphysema. The city reports that all 12 people who have died had an underlying medical problem.

David Fisman, a doctor and epidemiologist who works at the University of Toronto and has studied both Legionnaires’ and epi curves, said the city will need to test the bacteria strains to show that the cases are genetically linked in order to tie the outbreak to a source.

“These outbreaks are pretty frustrating,” he wrote in an email. “They’re obviously pulling out all the stops and maybe they’ll find the ‘smoking cooling tower,’ but often times the source remains unknown and things just end.”

The mayor has said that it will take one or two weeks for the results of those tests to come back.

Fisman said the genetic testing is necessary because an outbreak like this one causes more people to be tested in hospitals. That could mean the outbreak looks bigger than it is, as cases that might have otherwise passed under the radar are detected. “With legionella, if ye seek, ye find,” he wrote.

But even without seeking, we will likely be finding more Legionnaires’. The number of cases in the United States is growing each year, particularly along the East Coast. A 2008 study in the journal Clinical Infectious Disease found that the mean annual case count shot up from 1,268 during 1990-2002, to 2,198 in 2003-2005. The number of reported cases has continued to rise. Among other things, Fisman’s research has linked the bacteria to wet, humid weather that may get worse with climate change.

As de Blasio’s bar chart suggests, this outbreak seems to be over. But it probably won’t be the last if cleaning recommendations for cooling towers and other sources aren’t revised.