Since Washington, DC earned its first electoral votes in 1964, no Democrat has won the White House without carrying that jurisdiction. And yet, Hillary Clinton lost the District’s primary by 52 points. How can she claim to be electable if she can’t win in the most reliably Democratic Congressional District in the country?

There is a lot of flawed logic on both sides heading into the West Virginia primary. The fact is that Hillary Clinton and Barack Obama appeal to very different, and in fact somewhat opposite constituencies. As a result, there have been a number of Congressional Districts throughout the primaries in which one Democrat got absolutely clobbered by the other one.

Following are the worst-performing districts among the primary states in my database for each of Barack Obama and Hillary Clinton. These are the candidate’s head-to-head vote shares against one another, ignoring any votes for John Edwards and other candidates.

To some extent these advantages and disadvantages will carry into the general election, and to some extent they will not. The problem for Barack Obama is that West Virginia has only three Congressional Districts. All of them are quite similar to one another. And they are also quite similar to some of the worst-performing districts you see on the list above. PA-12, which ranks 10th on his list, shares a border with West Virginia. So do OH-6, where he received 27.6 percent of the two-way vote, PA-18, where he received 34.3 percent, and VA-9, where he received 35.2 percent. 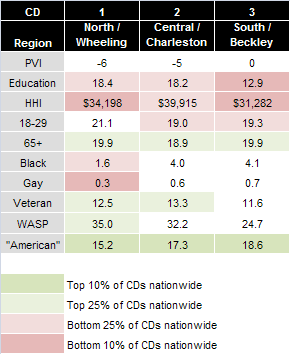 I had noticed that my model had tended to overpredict Obama’s performance in West Virginia type of districts. So I did some digging for additional relationships in the data, and came across a couple of new variables as a result. Let me describe those briefly here.

“Gay” is the percentage of households in that district that are occupied by same-sex partners. The Census Bureau does not track data on sexual orientation, but it does ask for the relationship status of all adults in the household, so this is the next best thing. Barack Obama performs better in districts with a higher number of same-sex partner households. This might seem counterintuitive, because Clinton, and not Obama, has tended to perform better with gay voters themselves. But it’s not the gay voters that are the important factor, so much as the neighborhoods in which they live. Richard Florida has found that this variable serves as a proxy for a whole number of other things, such as tolerance, and the presence of high-tech and “creative class” industries. It also appears to be a proxy for Obama’s support.

“HHI” is average household income. The conventional wisdom is that Obama tends to perform better in districts with higher incomes. While this is partially true, there is a complicated relationship between income and education levels. Barack Obama tends to perform very well in highly educated districts with low-to-moderate incomes — think for example your typical college town, or urban hipster enclave, or the entire state of Vermont. But his performance is only average in wealthier districts with average education levels. This is captured quite well in another Richard Florida invention, the “Bohemian Index”, which is essentially the ratio between education levels and income. So we’ve introduced HHI to the model, but also the Bohemian Index to account for this interaction.

“Veteran” is the share of military veterans in the population. Barack Obama actually overperforms among veterans. This is hard to perceive unless you look at the data at a fairly granualar level, because veterans tend to be older, and Obama otherwise performs poorly with older voters. But veterans are a hidden strength of his, perhaps because of his opposition to the War in Iraq or his presence on the Veterans’ Affairs committee. Whether this strength will carry over to the general election against John McCain, I don’t know.

I’ve also re-introduced the “Americans” variable — the percentage of adults who identify their ancestry on the Census simply as “American”, and accounted for added an interaction term between “Americans” and black voters. The effect of the Americans variable tends to be the most profound in districts where there are fewer black voters.

Finally, I am accounting for the number of appearances that each candidate has made in the state in the 30 days prior to the election, using New York Times data as it appears to be a little bit more reliable than the data source I was using before. There is definitely some danger to a candidate who blows off a state. For example, Barack Obama made 20 appearances in South Carolina to Hillary Clinton’s 9, whereas Clinton made 11 appearances in California to Obama’s 4. We know which way each of those states tended to break at the end.

Onward to the Congressional Districts:

CD-1: North/Wheeling. The oldest and whitest of West Virginia’s three districts, WV-1 shares quite a bit in common with PA-12, where Obama received just 27 percent of the two-way vote. We’re projecting a similar showing for him here. The only saving grace for Obama is that it’s arguably the least Appalachian district, as it has the lowest percentage of “Americans” and the highest percentage of WASPs. In all three West Virginia districts, the question will be whether Clinton can get the 75 percent of the two-way vote she’d need to earn a 5-1 delegate split. The model doesn’t quite have it happening in this one, but it will be very close. Projection: Clinton 66.9, Obama 29.1; Clinton 4-2 Delegate Split.

Forgot to mention: I am reserving 4 percent of the popular vote for John Edwards, which was his standing in the most recent Suffolk
poll. We did not have to worry about Edwards in Pennsylvania, North Carolina or Indiana, as he was not on the ballot there. But he is in West Virginia, and in fact he is featured quite prominently: 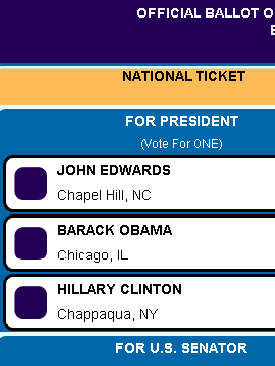 What’s a little bit unusual about the West Virginia ballot is that it lists each candidate’s hometown. Something tells me that the guy from Chapel Hill, North Carolina is going to pick off a few late-deciders from the candidates from Chicago and Chappaqua. Edwards got 4.5 percent of the vote in Tennessee — he actually beat Obama in a handful of rural counties there — and he can probably expect to do similarly here.

CD-2: Central / Charleston. West Virginia doesn’t have any cities of significant size, but WV-2 is the closest that it comes to urban, as it has by far the highest incomes in the state (though still well below the national average). If Obama had made more of an effort in West Virginia, he might have had a chance to salvage a 3-3 delegate split here. Since he didn’t make that effort, his consolation prize is that he probably doesn’t have to be worried about losing a fifth delegate to Clinton. Projection: Clinton 64.8, Obama 31.2; Clinton 4-2 Delegate Split.

CD-3: South / Beckley. There are whole pockets of WV-3 that are as poor (and poorly-educated) as can be found in the United States. The only thing separating Obama from total oblivion is the large-by-West-Virginia-standards 4 percent African-American vote. Obama will need to turn that vote out in order to avoid a 5-1 delegate split for Clinton, but this is extremely vulnerable territory for him. Projection: Clinton 70.8, Obama 25.2; Clinton 4-2 Delegate Split.

We are projecting a margin of 39 points and approximately 105,000 popular votes for Hillary Clinton. The statewide and PLEO delegates will almost certainly be split 5-2 and 2-1 respectively. Obama will either salvage 7, 8 or 9 delegates from West Virginia depending whether WV-1 and WV-3 flip a fifth delegate to Clinton.

I have also slightly revised my turnout model. As Dick Bennett has kindly pointed out, my model had tended to underestimate turnout in the last couple of primaries. The trick is that Democratic primary turnout has tended to increase as the identity of John McCain as the Republican nominee has become known. The way I’ve worked around this is to apply John McCain’s standing in the Real Clear Politics Republican nomination average on the morning of each Democratic primary. As McCain’s position has improved — meaning that his nomination became more and more certain — more people have voted in the Democratic primaries.

EDIT: The paragraph that follows originally had stated that West Virginia has a closed primary. It does not; it has a semi-open (“modified”) primary, as did North Carolina, in which independents may vote but Republicans may not. Fortunately, my model itself had West Virginia correctly specified as an open primary, so the projections have not been affected. But I have changed the text that follows.

On the other hand, another factor is that there has been relatively little campaign activity in the state, particularly from Barack Obama. And from what the model can gather, Obama activity is a more important determinant of turnout than Clinton activity. While it would not surprise me if there were fairly high turnout as sort of a big F.U. to Barack Obama — remember what I wrote before about what happens to a candidate when he is perceived as blowing off a state — we ought to expect less enthusiasm than in North Carolina and Indiana. Moreover, West Virginia has an extremely small share of independent voters, so while West Virginia has a semi-open primary in theory, it may be closer to a closed primary in practice.

Overall, we are projecting turnout equal to slightly more than 80 percent of John Kerry’s vote in 2004, or about 270,000 total votes with John Edwards included. That is an extremely healthy figure by the standards of a typical cycle’s primaries, but lower than we’ve seen in recent contests.

I do want to write a little bit more about the notion that West Virginians are racist. The longer version will have to wait until later today or tomorrow. But the short version is: yes, there are racist voters in West Virginia, but there are racist voters in every state. The primary determinant of the extent to which racism tends to be more manifest is education levels, and so the effects may be more noticeable in West Virgnia, a state with poor academic achievement. But there is no reason to believe that West Virgnians are particularly racist, relative to their education levels.

p.s. For the record, I never did hear back from Mr. Bennett, as the Concord Monitor has noticed.