The holiday season hasn’t been kind to House Speaker John A. Boehner. He was sharply criticized by fellow Republicans for failing to pass legislation providing aid to those affected by Hurricane Sandy. Earlier, he was sidelined in the negotiations to resolve the so-called fiscal cliff. And before that, he failed to garner enough support from his own caucus for “Plan B,” Mr. Boehner’s own bill to avert the fiscal crisis.

The new year has not started out entirely smoothly for Mr. Boehner, either. He was re-elected as speaker of the House on Thursday, but much of the media’s coverage of the vote focused on the number of Republicans who chose not to vote for Mr. Boehner. The headline at Slate read: “Boehner Wins New Term as Speaker, in Maximally Humiliating Fashion.”

But Mr. Boehner received 220 votes out of 232 Republicans in the House, not counting Mr. Boehner himself. (The prospective speaker traditionally does not vote, or votes “present,” although former Speaker Nancy Pelosi voted for herself in the 110th and 111th Congress). Mr. Boehner received the votes of 95 percent of his caucus. Is that really that humiliating?

Judged against recent history, at least, the answer is yes. Mr. Boehner’s 95 percent support level might not seem that terrible, but the vote for speaker has historically been a fait accompli. The 12 defections Mr. Boehner suffered are more than in any other speaker’s election in over two decades. Our database shows all votes for speaker since 1991 and Mr. Boehner is just the third speaker since then to face more than one defection. And since the 102nd Congress was sworn at the beginning of 1991, no representative elected speaker has received a smaller share of his or her party’s vote. 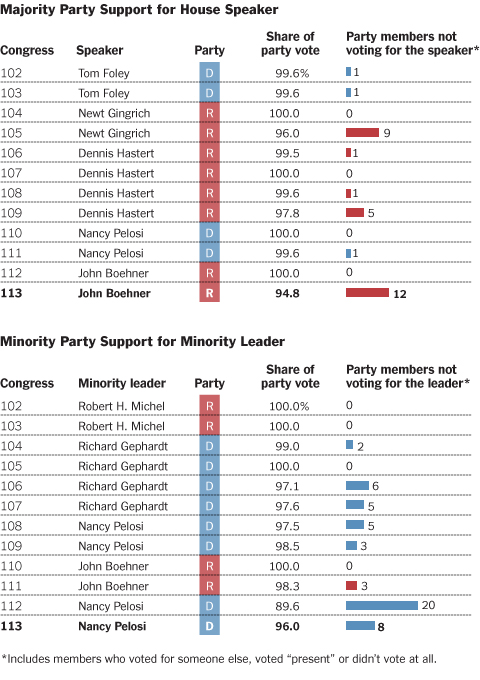 The most recent speaker with more than one defection was former Representative J. Dennis Hastert, Republican of Illinois. When Mr. Hastert was voted into his fourth term as speaker, in 2005, five Republicans abstained from casting a ballot.

But the closest parallel to Thursday’s vote came at the start of the 105th Congress, in 1997. Newt Gingrich was re-elected speaker with 96 percent of his party’s support, with nine Republican defections. Mr. Gingrich’s re-election as speaker that year followed a failed attempt to oust him. According to some reports, the failed coup involved Mr. Boehner, then the Republican conference chairman. Mr. Boehner voted for Mr. Gingrich in the end.

The most rebellious vote in recent years actually came on the minority side. At the start of the 112th Congress, just after Democrats had been shellacked in the 2010 midterm elections, 20 Democrats did not back Ms. Pelosi in a vote won by Mr. Boehner.

It is unclear how much Thursday’s vote will mean for the rest of Mr. Boehner’s term as speaker. He may yet win over reluctant members of his conference. But recent history doesn’t bode well for him.

Mr. Hastert, the other recent speaker to suffer more than one defection, chose not to seek a leadership post or re-election after Republicans lost their House majority in the 2006 midterm elections.

Mr. Gingrich’s tepid re-election as speaker at the start of 1997 presaged a total collapse in his backing and — following the G.O.P.’s subpar performance in the 1998 midterm elections — his resignation as speaker.

Update: An earlier version of a chart with this post described the votes for House speaker and House miniority leader incompletely. Representatives who did not vote for their party’s consensus choice included ones who voted for another member, voted “present” or did not vote at all. Not all the representatives who abstained from voting were deliberate “defections.”

A version of this article appears in print on 01/05/2013, on page A12 of the NewYork edition with the headline: A Small but Significant Number of Defections in the Vote on Boehner as Speaker.