Aside from some brilliant play by Mexican goalkeeper Guillermo Ochoa that turned an expected victory for the Brazilian national team into a draw, so far the 2014 World Cup has gone well for host Brazil. The home team won its group and advanced to the Round of 16, and the widespread concerns about social unrest, street crime and stadium completion have faded as the games have largely gone off without a hitch.

Of course, with a price tag estimated at $11.3 billion in public works spending alone, it will take more than just a trouble-free four-week tournament to justify Brazil’s heavy investment in hosting the World Cup. In terms of long-run development potential, of most concern to economists is the $3.6 billion in total spending on the 12 new and refurbished stadiums that are being used for the event. The overwhelming conclusion of scholarly research on the subject of stadiums and arenas is that they provide little to no long-term economic benefits. It’s for this reason that Brazil originally emphasized that the great majority of the infrastructure spending for the World Cup would come in the areas of general transportation, security and communications, with less than 25 percent of total spending going towards stadiums.

Unfortunately, cost overruns at the sports venues increased stadium costs by at least 75 percent over the original estimates. Because of these increases and project delays, Brazil was forced to divert its resources away from general infrastructure projects that may have had greater long-run growth potential in order to focus on a mad scramble to finish the stadiums in time for the first whistle.

After all, it was crucial to have the stadiums ready for the start of the tournament, but improved subway systems could wait. Before the Cup, Reuters reported that Brazil only delivered half of the projects it pledged, and many of them didn’t finish in time for the Cup. Brazil is now left with half of the planned general infrastructure benefits but all of the planned costs.

At the very least, the country is left with 12 new state-of-the-art soccer stadiums. From a development standpoint, the only thing worse than an expensive, publicly financed stadium is an empty, expensive, publicly financed stadium. So what’s the prognosis for these stadiums’ future use? Here it’s particularly helpful to look at the historical experience of past World Cup host countries.

The following tables show the hosts since 1994 along with the stadiums used, each stadium’s capacity, the amount spent for each stadium for construction and refurbishment specifically for the World Cup (including both public and private spending), the number of major events at the stadium four years after the World Cup and their total attendance, and two generated statistics. Borrowing a term from economists Harry Sølberg, Jens Alm, Rasmus Storm, Thor Georg Jakobsen and Holger Preuss, I calculated a stadium use index (SUI), which is the total attendance divided by the capacity, or effectively the total number of times during the year the stadium filled to capacity. The second statistic is the fan cost index (FCI), which is the construction cost per fan visiting the stadium four years after the initial event. Essentially, the SUI is how much the stadium is used after the event, and the FCI is how much it cost to get that usage.1

A couple of caveats are in order. Attendance figures include all regular-season matches of the primary tenants of the venues four years after the World Cup; sporting events are the biggest piece of attendance for any stadium. When possible, attendance at major concerts, pre-season and post-season events, and exhibition matches is also included. Because not every event is included, these figures represent minimum attendances for the venues. For Japan and South Korea the attendances are for events in 2010, eight years after their joint World Cup, due to the availability of data. For South Africa, the data is for 2013, three years after it hosted the Cup. It should also be noted that attendance can swing wildly from year to year. Primary tenants can be relegated to a lower league, or special events can temporarily boost attendance. For example, South Africa hosted the 2013 Africa Cup of Nations soccer tournament, which served more than double the typical annual attendance at three of the country’s World Cup stadiums, so South Africa’s numbers are likely higher than what you’d see in a typical year. 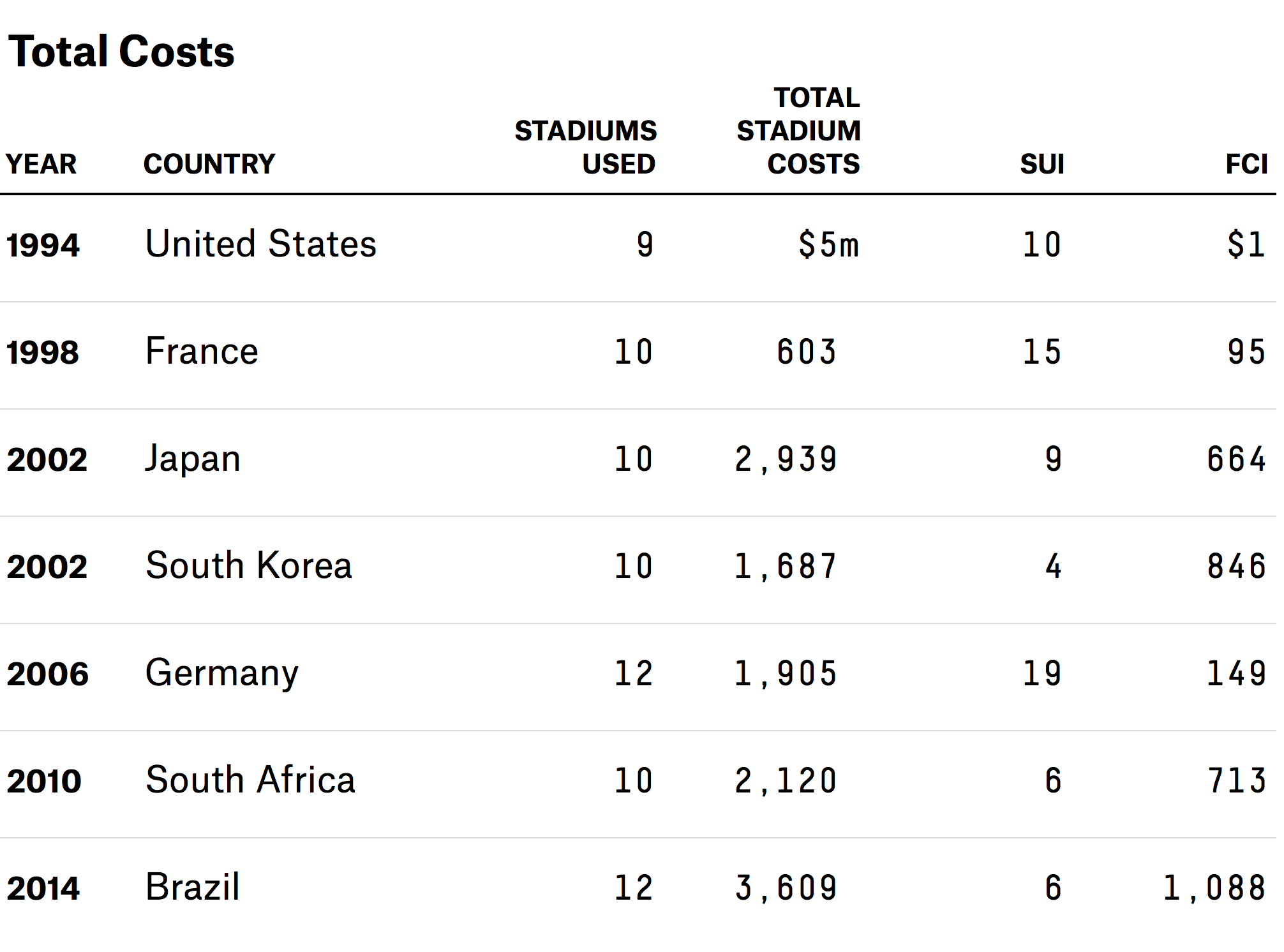 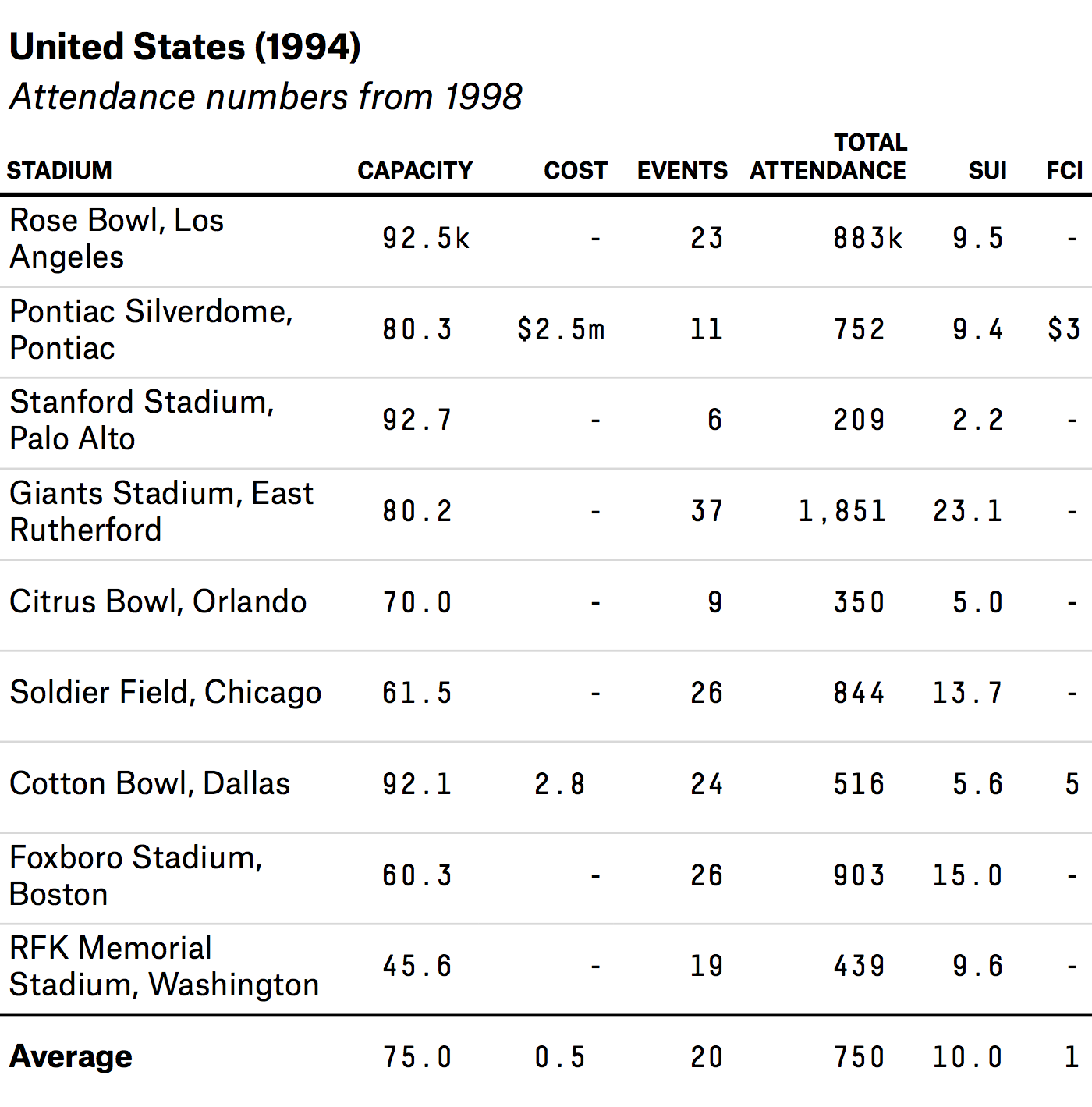 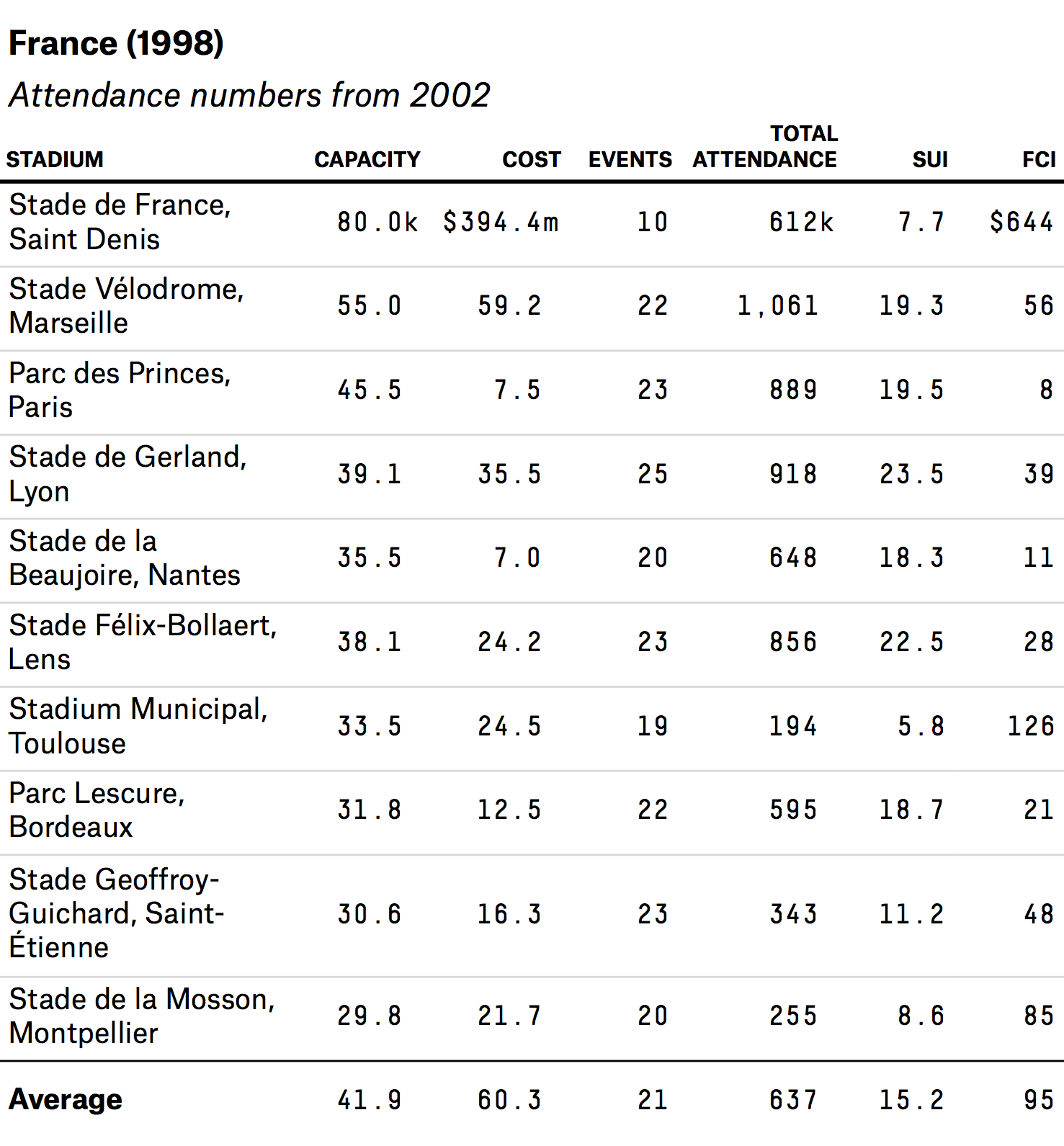 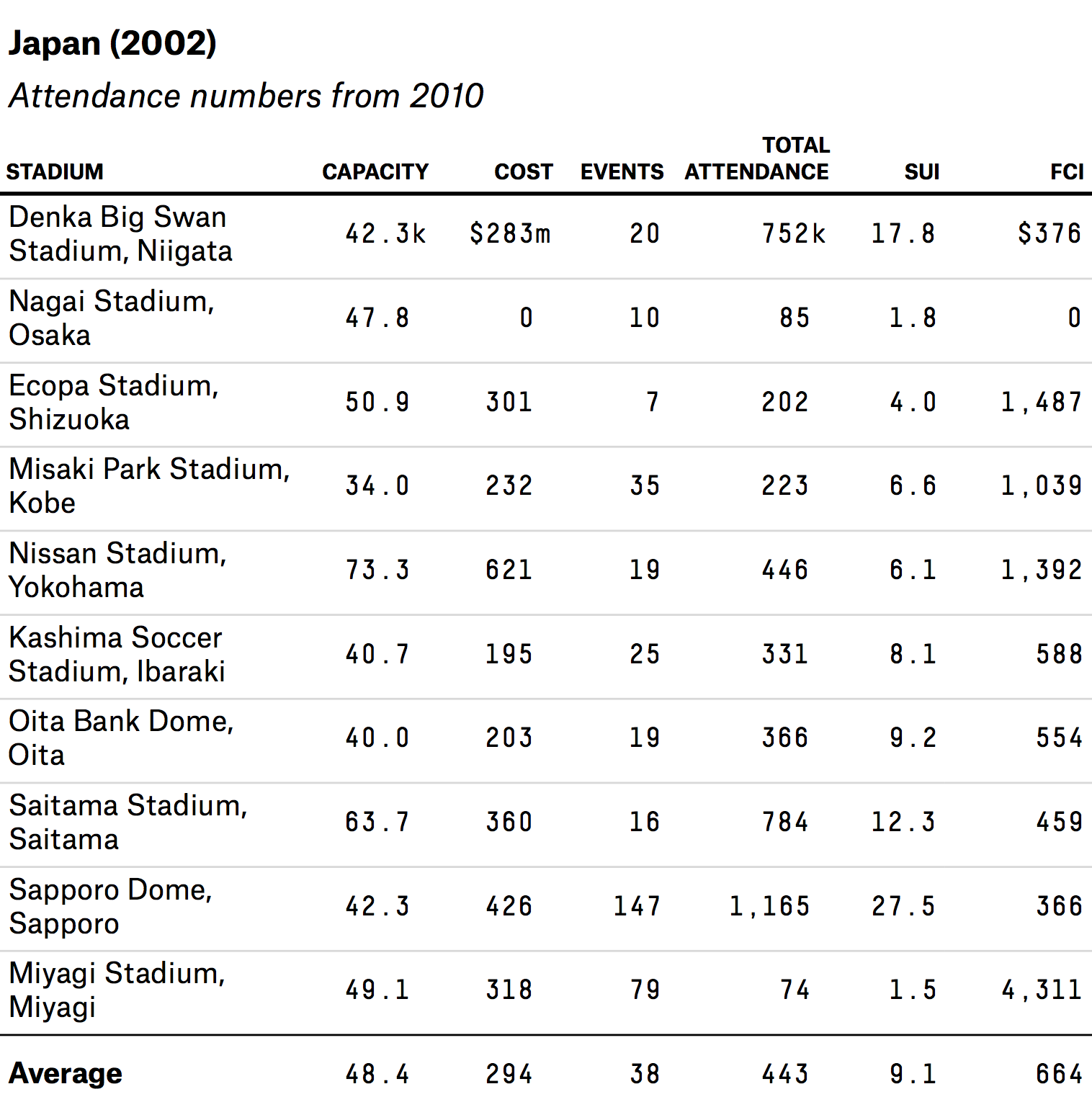 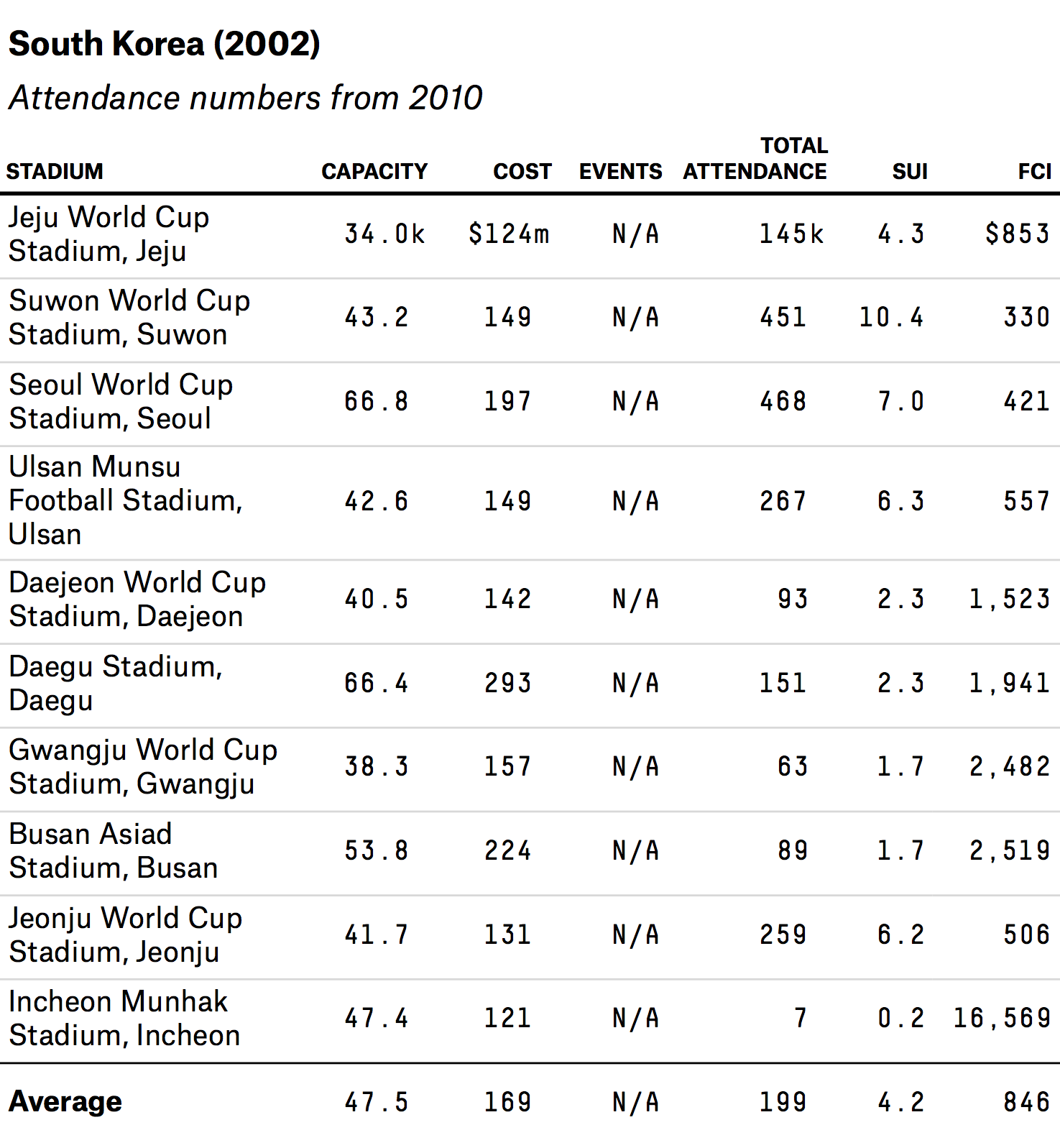 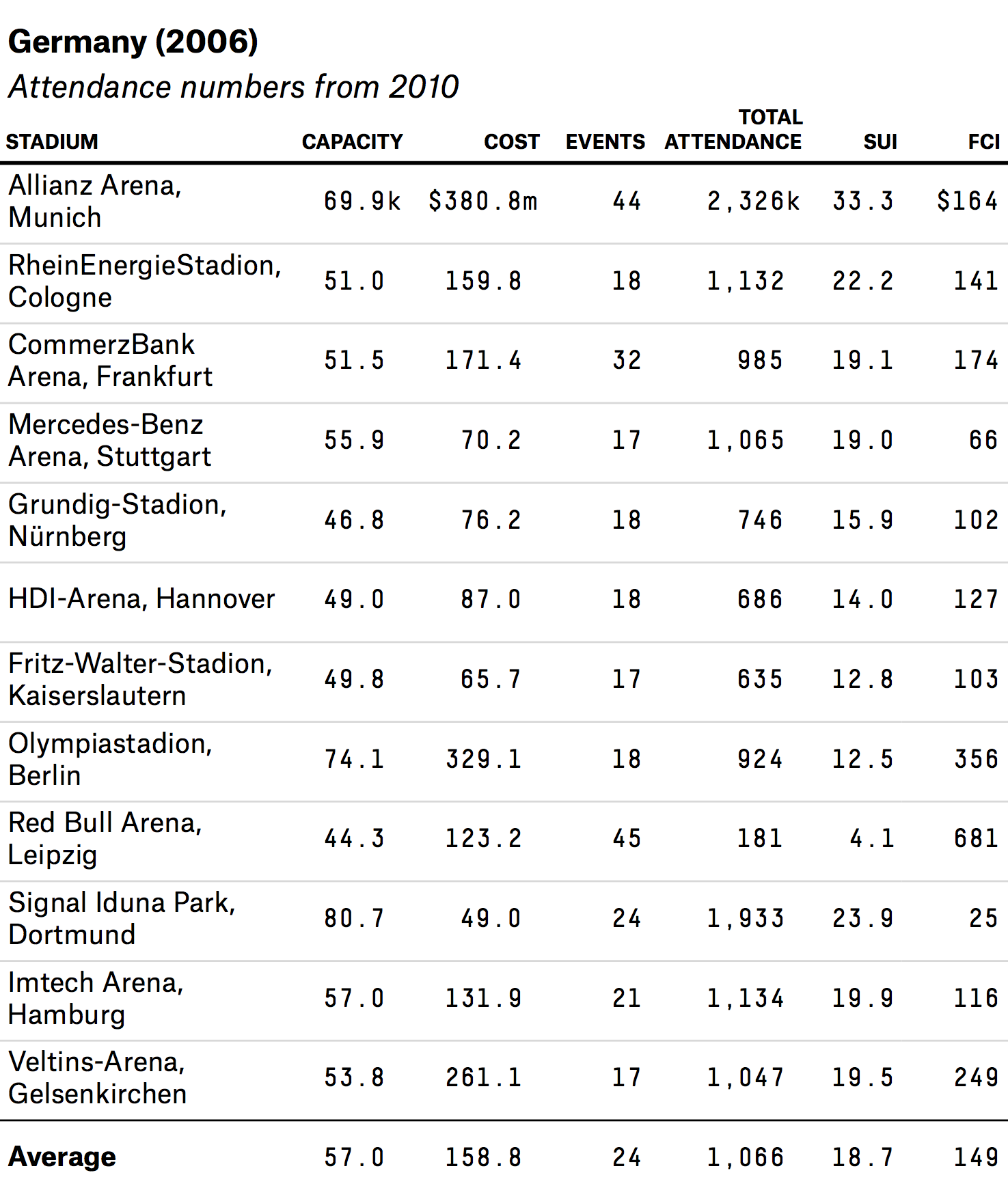 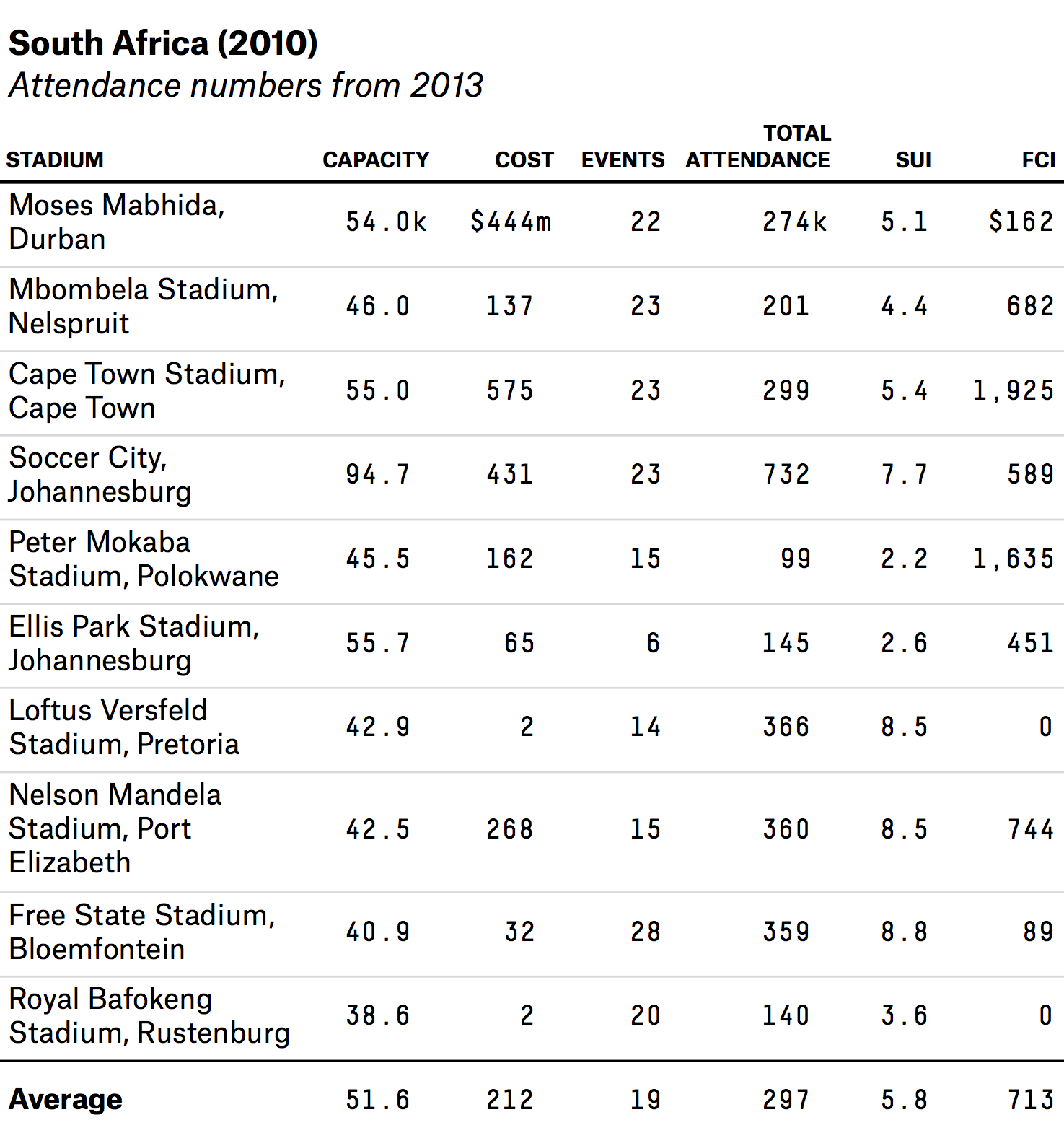 In terms of usage, Germany and France are the clear winners. Nearly all of their stadiums were in regular use by soccer teams with substantial fan bases following the World Cup. The U.S. comes in just behind primarily due to the fact that many of the U.S. stadiums had football teams as their primary tenants. While the NFL and top college teams routinely fill the stadiums, the relatively short 12- or 16-game football seasons lead to lower SUIs than a soccer team that routinely sells out its games over a 38- or 40-game season. Japan is a mixed bag in terms of usage. The Sapporo Dome, which hosts both a Nippon Professional Baseball team and a J-League soccer team, is used frequently, and indeed boasts the second-highest SUI in the data set. But the $318 million Miyagi Stadium essentially sits unused, or more precisely, is used at a tiny fraction of its capacity. The clear losers are South Africa and even more so South Korea. Each country is filled with numerous stadiums that are either rarely used or never sell out.

From an economic standpoint, the U.S. is the clear winner, having used all pre-existing stadiums and incurring only minimal costs, such as installing real grass inside the Pontiac Silverdome and slightly widening the field at the Cotton Bowl in Dallas. France and Germany also look like big winners by minimizing their spending on stadiums in the first place, combined with heavy usage of the facilities after the event. France built only one new stadium for the 1998 World Cup, the Stade de France. Germany spent substantially more than France, but the Bundesliga has the highest attendance of any soccer league in the world. Furthermore, from a taxpayer standpoint Germany looks even better, since private financing covered roughly half of overall stadium expenditures.

Japan, South Korea and South Africa look distinctly worse, with expenditures per fan averaging five to 10 times higher than that of France or Germany. High expenditures combined with low usage create stadiums that are hard to justify from an economic standpoint.

The only question left is how Brazil will fare. We chose not to factor in the 2016 Olympics, of which Brazil is also host, for a number of reasons. One is that the Games may affect only one stadium (Maracanã, in Rio de Janeiro), although some soccer games might be played in the other stadiums. Additionally, Olympic soccer isn’t always a big draw. More importantly, the Olympics are two years off and the horizon we tried to use as much as possible was four years after the stadiums’ construction. Of course, we can’t look four years into the future to see what the country’s World Cup stadiums will look like then, but the strongest predictor of whether a stadium will be used in the future is how heavily the stadium’s new tenants used their previous facilities in the past. 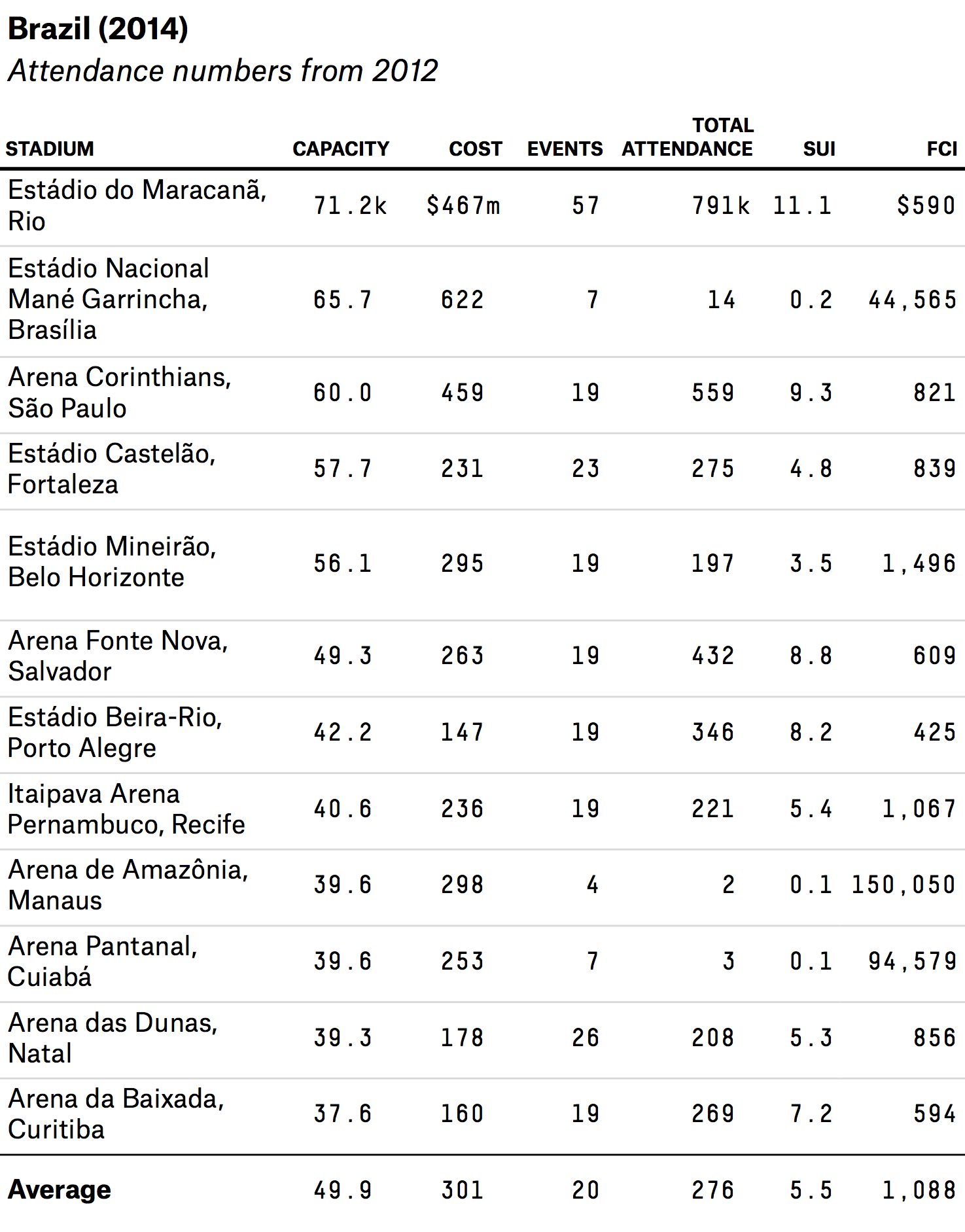 The above table shows the same data for Brazil that was shown for previous hosts, but uses 2011 attendance data for the teams that will be the regular tenants for the new stadiums.2 Some notes are in order. The Brazil data does not include soccer matches outside the regular soccer season including international friendlies, World Cup qualifiers or matches in the Copa Libertadores, the Latin American version of the Champions League, nor does it include attendance at non-soccer events such as concerts. Thus, the reported figures likely understate the expected attendance four years down the road. In addition, the shiny new venues may raise attendance at soccer clubs with new stadiums by providing a safer, more comfortable viewing environment. On the other hand, the costs shown in the table may understate the final expenditures on the stadiums. A variety of sources have reported stadium spending that exceeds that shown here by a wide margin.

With these caveats in mind, an initial estimate for Brazil shows a projected SUI that would be among the lowest of recent hosts, with stadiums in Brasília, Manaus, and Cuiabá among the least-used stadiums from any recent World Cup. This poor stadium usage, combined with the highest nominal stadium construction costs of any World Cup, leads to a projected record-high FCI of over $1,000 of stadium construction costs per fan in attendance in four years.

The Brazilian national team may do great on the field, but the country’s stadium economics look like a bust. The only thing really going for Brazil is the fact that it may not hold the dubious distinction of building the least economically sensible World Cup facilities for very long. Russia, the 2018 host, is looking to spend nearly $7 billion on stadiums, nearly twice the amount spent in Brazil. And the event moves to Qatar in 2022, where stadium expenditures could be … well, even FiveThirtyEight may not have enough computing power to make those estimates.

Victor Matheson is an economics professor at the College of the Holy Cross. He specializes in the economic impact of mega-sporting events.