There are just two weeks remaining in the NFL regular season — and, as expected, we’re getting much more clarity about which teams are most likely to make a run to the Super Bowl.

Twelve teams will make the NFL playoffs. Four of them — New England, Denver, Indianapolis and Arizona — have clinched a position. Another seven — Seattle, Detroit, Green Bay, Dallas, Baltimore, Pittsburgh and Cincinnati — have at least an 80 percent chance of reaching the postseason. It’s more likely than not that one of these teams will be knocked out, but the playoffs aren’t as wide-open as they appeared a few weeks ago. The 12th spot will go to the winner of the NFC South.

The real drama, however, will ensue once the playoffs begin. More than at earlier points in the season, there’s a clear top level of teams. It consists of the Patriots, Seahawks and Broncos.

You could debate the order of these teams. FiveThirtyEight’s Elo ratings have the Patriots first, the Seahawks second and the Broncos third. Football Outsiders’ DVOA also has New England first, but the Broncos ahead of the Seahawks. Jeff Sagarin, of USAToday, has the teams in the same order as DVOA. Vegas point spreads imply that Seattle is the best team, followed by New England and Denver.

But there’s reasonably clear separation between the top three and everyone else in the league. According to Elo, in fact, the gap between No. 3 Denver and No. 4 Arizona is wider than the gap between Arizona and No. 12 Philadelphia. Collectively, the Patriots, Seahawks and Broncos have a 62 percent chance of winning the Super Bowl.

None of these teams is exactly a surprise. In fact, each one ranked in the top four in our preseason Elo ratings, which were based on the teams’ Elo ratings at the end of last year. 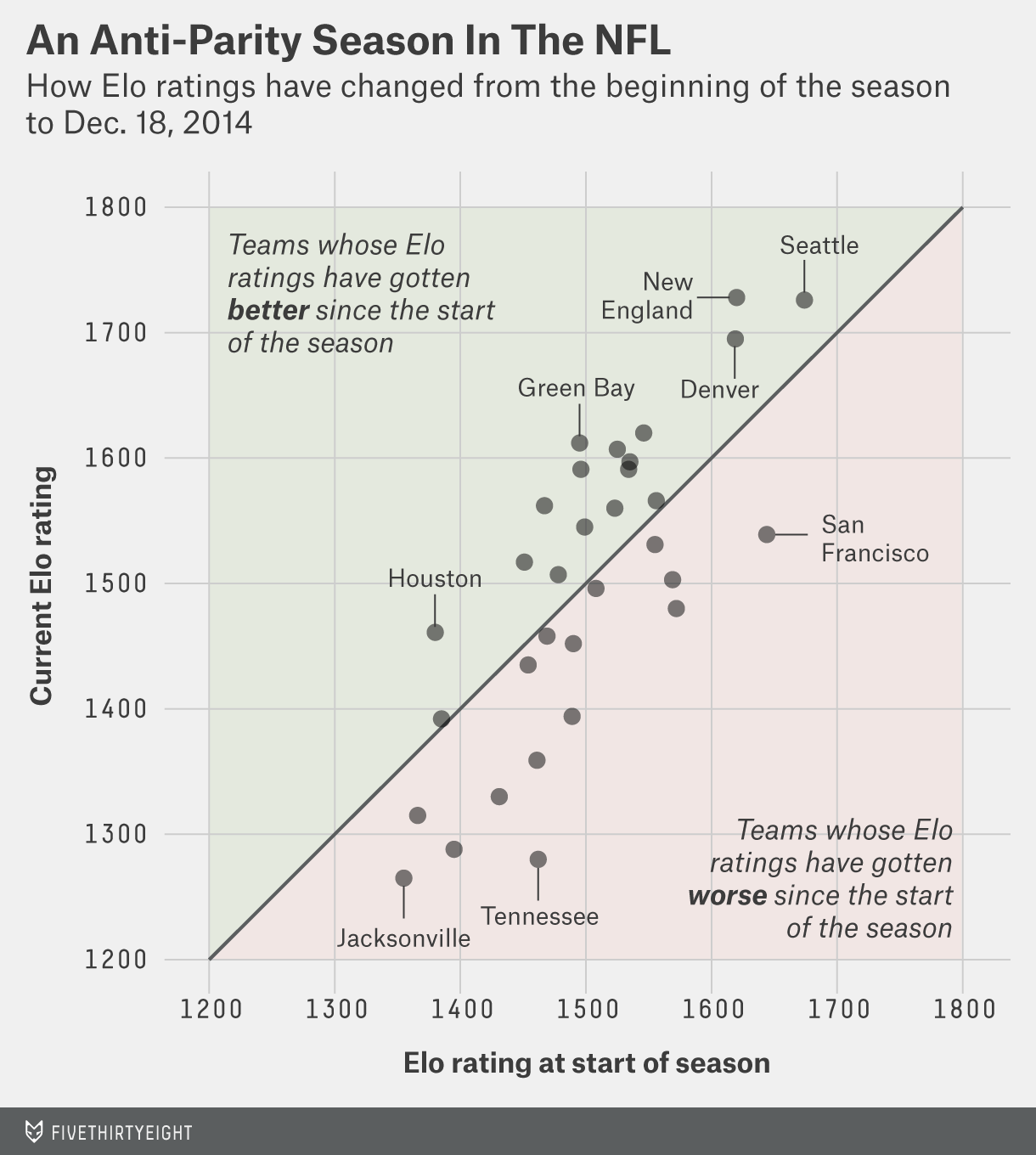 The Elo ratings generally haven’t behaved like this in past seasons. The way the system is designed, a team is about equally likely to see its rating improve or decline, whatever rating it starts with.

It’s probably premature to decipher any long-term trends from this season’s results. But perhaps there are some factors nudging the NFL away from the parity we’ve grown used to in recent seasons. Rules changes have allowed great quarterbacks to be more dominant. Access to information, technology and analytics may be enabling teams with great coaching, scouting and management to maintain more of an edge even as player personnel turns over.

As for the rest of the teams in the playoff hunt, we’ve reached the point where playoff outcomes are more deterministic and less probabilistic, with several opportunities for teams to clinch or eliminate themselves from playoff position with wins or losses this week. Mike Beouy and Reuben Fischer-Baum’s column on playoff implications has all the detail you’ll want on these, but here’s how Elo has the numbers: 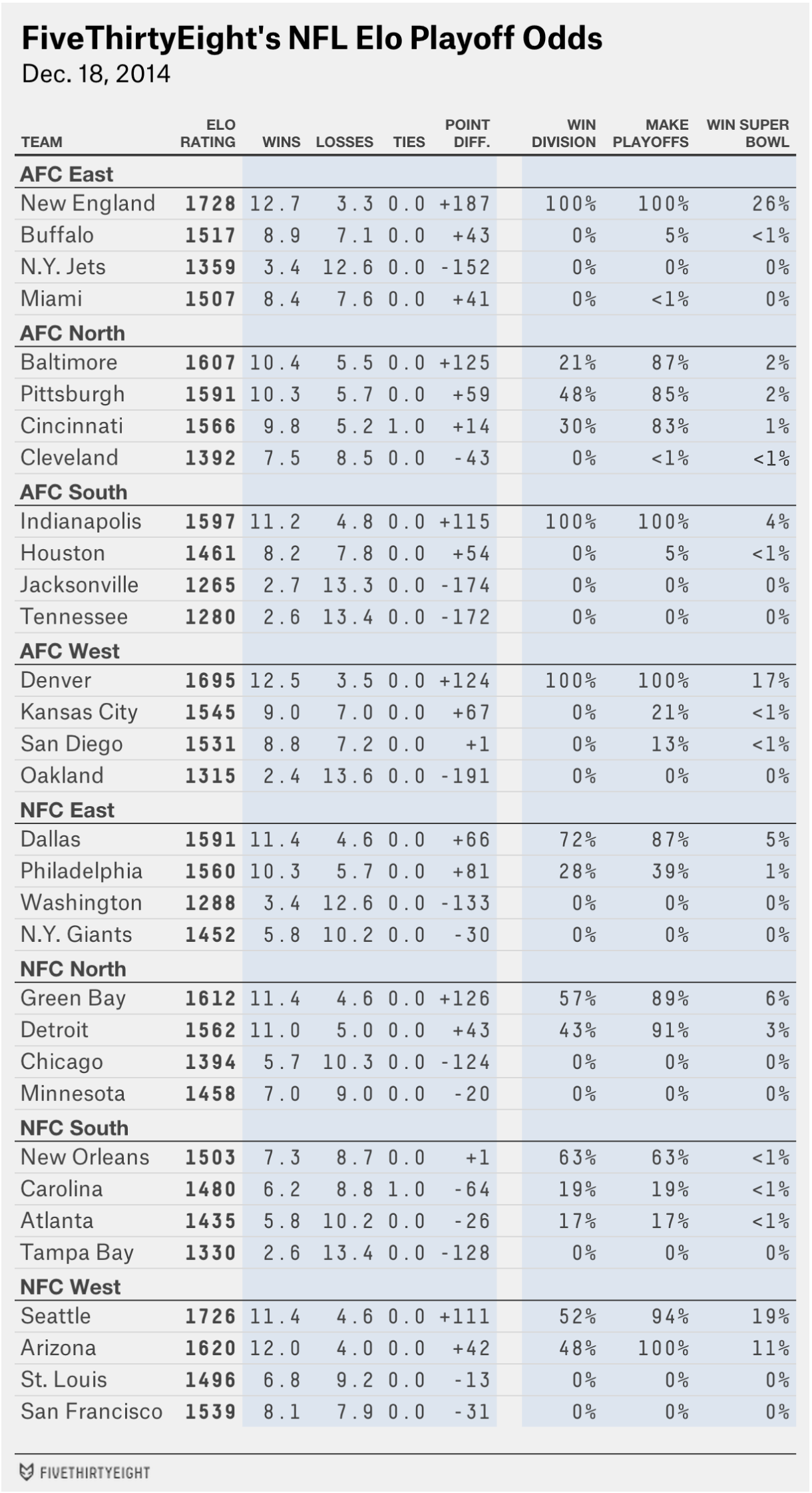 There are some subtle differences between the playoff odds that Elo assigns and the ones that Beouy and Fischer-Baum do. This is partly because they use different measures of team strength and partly because the Beouy/Fischer-Baum system has a more complete handling of the NFL’s complex tiebreaker rules. But the overall message is largely the same; each system has the 11 teams I mentioned before with an 80 percent chance or greater of making the postseason.

However, it matters significantly how the teams are seeded. This is most acute in the case of the Arizona Cardinals. The Cardinals are currently one game ahead of the Seahawks in the NFC West, but Arizona lost to Seattle earlier this season, so Seattle would move ahead on the tiebreaker if they beat Arizona this weekend at University of Phoenix Stadium. Elo has Seattle as only narrow favorites in that game, but Vegas odds have the Seahawks favored by 8 points.

If Arizona wins, it will clinch home-field advantage throughout the playoffs. Arizona holds the tiebreaker advantage over the rest of the conference, partly by virtue of having beaten Dallas and Detroit earlier this season. Uniquely, this advantage would also extend to the Super Bowl, which is being held in Glendale, Arizona, this year. The Cardinals would become the first team ever to play a Super Bowl in its home stadium (although the San Francisco 49ers came close when Super Bowl XIX was held in Stanford, California.)

So even though they’ve clinched a playoff spot, this weekend’s game couldn’t be more important for Arizona. The Elo simulations give them a 37 percent chance of winning the Super Bowl if they win the NFC West, but just a 7 percent chance if they enter as a wild card team instead. 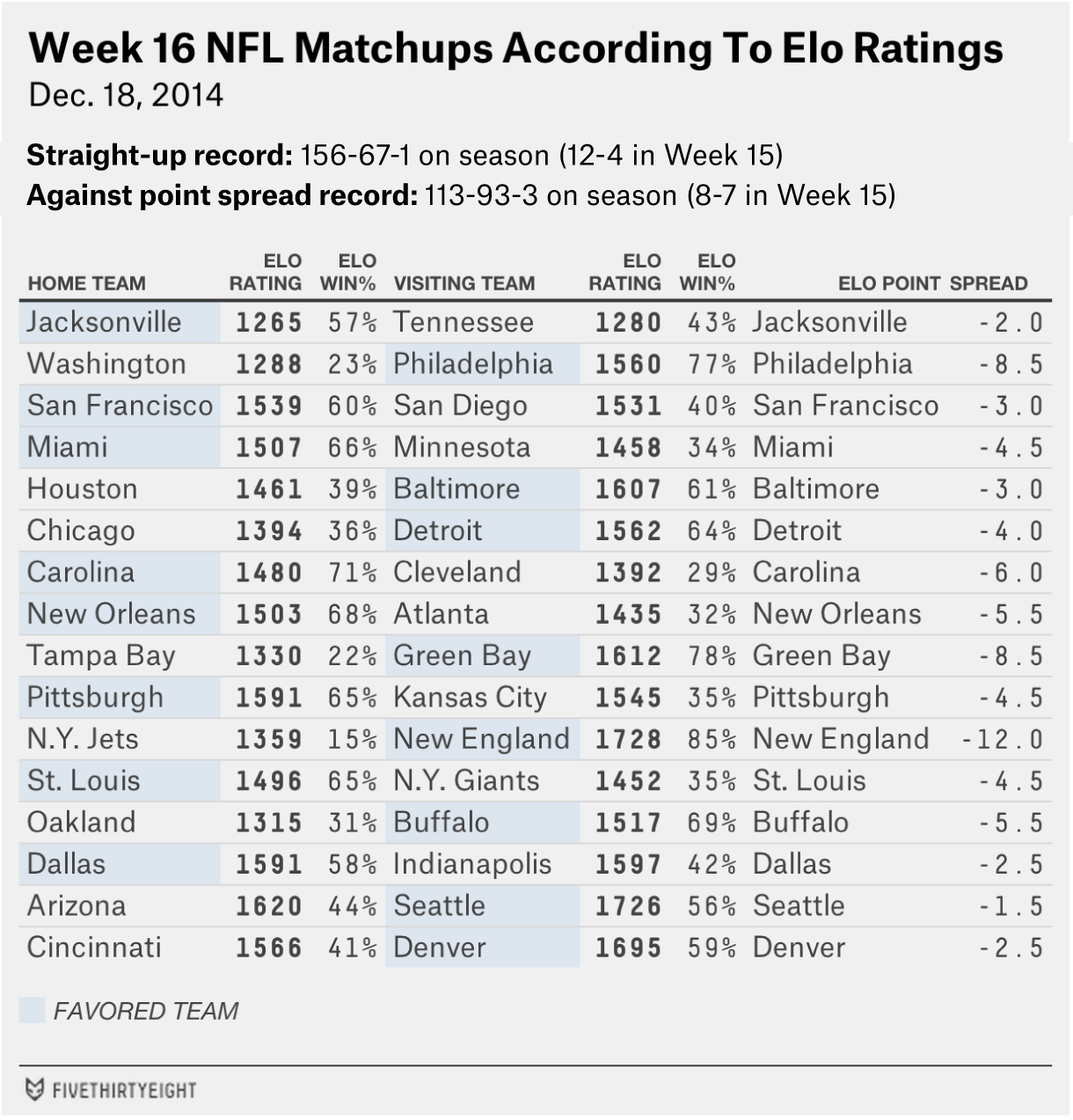 The dominance of teams like New England, Seattle and Denver has made it easier for Elo to “call” winners correctly this year; the team favored by the system has won about 70 percent of the time this season.

Elo also has about a 55 percent winning percentage against closing Vegas point spreads. But as we’ve said every week, we still don’t think you should place bets using Elo, at least not without considering a lot of other information. Although we didn’t publish Elo ratings before this season, historically they would have picked only about 51 percent of games against the point spread.

Elo has mostly been right about the Cardinals, however — and it’s the Arizona-Seattle game that will tell us the most this weekend about who’s going to the Super Bowl.