For decades, NFL placekickers have been on a seemingly never-ending quest for perfection. Conversion rates increased relentlessly each year like numbers on the National Debt Clock. But a funny thing happened on the road to forever. The field-goal success rate this season is at its lowest level since 2003. And the decline of 4.2 percentage points to 80.5 percent from 2018 to 2019 is the greatest year-to-year drop in efficiency since that from 1975 to 1976, dinosaur days when square-toed kickers still roamed.

Today’s kickers are struggling so mightily that not even the extra point can be safely assumed. The 93.4 percent success rate on PATs is the lowest it’s been, according to Pro-Football-Reference.com, since the ball’s placement was moved back to the 15-yard line in 2015.

Old reliable Adam Vinatieri, the NFL’s all-time points leader and one of the greatest clutch kickers in history, now seems, well, just old. The 46-year-old is converting only 70 percent of extra points. His field-goal success rate is better, barely, at 73.7 percent. Vinatieri’s misfires are a significant factor in the Colts stumbling out of the playoff race, costing the team two wins and, at a minimum, playing a role in Indy’s shocking home loss Sunday to the Miami Dolphins.

And it’s not just Vinatieri, whose Colts aren’t even the worst kicking team in their own division. The Titans are on their third kicker and have not made even half their attempts this year (just seven of 15). On extra points — which are 33-yard kicks from dead center, if the kicker chooses that spot — Tennessee is faring slightly better, in 24th place in the league with a 91.7 percent success rate. But four teams besides the Colts are hitting less than 90 percent of their PATs. Even a kicker considered to be the most clutch in NFL history, 44-year-old Matt Bryant, was dropped by the Falcons after flagging five of 14 field goal attempts plus an extra point.

Altogether, 12 teams currently have field-goal success rates at or below 75 percent — the most teams below that threshold since 2003.1 The league as a whole hasn’t fallen under that mark since 1992, and this is the closest it has been since 2003. A field-goal kicking trajectory that was followed for decades has suddenly been reversed. 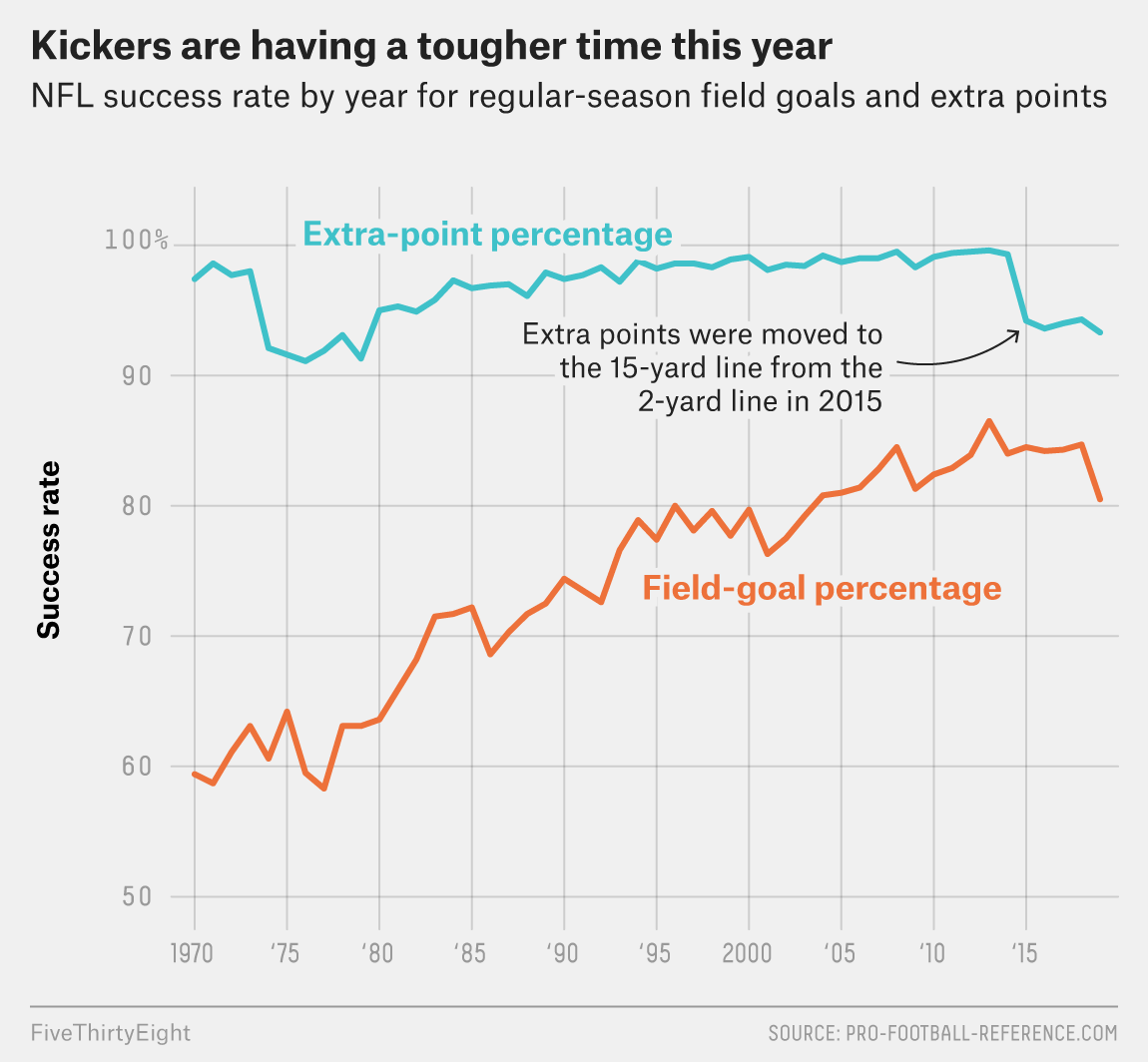 The 49ers lost their first game of the season on Monday night when their undrafted kicker, Chase McLaughlin, badly shanked the 47-yard would-be game-winner in overtime against the Seahawks. (Kyle Shanahan passed on going for it on fourth and inches.) McLaughlin was replacing an injured Robbie Gould, whom San Francisco made the second-highest-paid-kicker this past offseason. But it’s not a safe assumption that Gould, 36, would have done better. He’s made just 13 of 20 attempts this year, the lowest success rate of his career.

The steady increase in field-goal efficiency over the years altered coaching models on when to go for it or when to attempt a kick, given that field-goal conversions were so highly probable. For example, the success rate on the 152 field-goal attempts last season of at least 50 yards was 63.8 percent — a full 11 points higher than in 2009, when there were 48 fewer attempts. Kickers had become so proficient that, in 2016, the league began collecting data via chips installed in the footballs themselves to help decide how much more narrow the goalposts should be to make kicks more challenging. Those days now seem over.

In Week 10, as the game between the Bills and Browns was winding down, Buffalo let 33 seconds run off the clock between snaps after a second-down play got the team to the Cleveland 35 — an area2 from which kickers had averaged a 67 percent conversion rate the prior two seasons. The Bills sent out their kicker, Stephen Hauschka, to attempt the 53-yard boot on fourth and 4 with 22 seconds left. That was despite Hauschka having missed four 50-plus-yard kicks in a row and a 34-yarder earlier in the game. The attempt sailed wide left.

Perhaps teams should kick fewer field goals, or better yet, find new kickers instead of sticking with ones whose best days are probably behind them.