There’s an old saying in the West, “Whiskey’s for drinking and water’s for fighting over.” Without water, pillars of the region’s economy, such as agriculture, suburban development and snow- and river-related tourism would disappear. So it’s no wonder that at least 10 Western states and one Canadian province have instigated cloud seeding projects to bolster their water reserves.

Seeding involves injecting particles, typically silver iodide, into the clouds to provide a scaffold for the formation of ice crystals, which then fall as snow or rain. Bernard Vonnegut (brother to Kurt) pioneered current techniques in the the 1940s. The U.S. military used cloud seeding during the Vietnam War in hopes of creating monsoonal rain over the Ho Chi Minh trail. China seeded clouds during the 2008 Beijing Olympics so any rain would come before, and not during, opening ceremonies.

Yet there’s still more speculation than definitive evidence that cloud seeding works. Early experiments produced a few spectacular results that catapulted expectations beyond what the science had shown, says Daniel Breed, a meteorologist at the National Center for Atmospheric Research (NCAR) in Boulder, Colo. “There was all this excitement extrapolated into very optimistic claims about how effective it would be,” he says. Measuring the effects of cloud seeding has proven difficult because there’s so much natural variability in precipitation. “You’re looking for a small signal in a very large range,” Breed says.

In 2003, a National Academies panel examined the evidence on cloud seeding, concluding that there was still “no convincing scientific proof” that it works, and calling for a rigorous evaluation of cloud seeding’s results. The panel’s recommendations served as a basis for the Wyoming Weather Modification Pilot Program (WWMPP), a rigorously designed, randomized trial to quantify the effectiveness of cloud seeding in the state. Earlier this month, researchers went before the Wyoming Water Development Commission to present findings from the $13 million study.

After nearly a decade of work, scientists concluded that cloud seeding could boost precipitation by 5 to 15 percent. The evidence came from an experiment in which two adjacent mountain ranges in southern Wyoming — the Medicine Bow and Sierra Madre — were randomly selected for seeding when conditions were amenable. Given the close proximity of the two ranges, they’re often hit by the same storms, so the unseeded range could serve as a control when the other was seeded. Researchers measured the results with snow gauges located in the target areas, as well as in areas outside the seeded zone for comparison. In addition, they analyzed snow samples to find out if the silver iodide was present in snow and whether it was accumulating in the environment in significant levels. (The answer to the latter question was no.) The researchers also used high-resolution Weather Research and Forecasting modeling to simulate seeding operations.

Analysis showed that cloud seeding produced a 3 percent increase in precipitation with a 28 percent probability that the study would produce a result at least this extreme if cloud seeding didn’t work. Most scientists and statisticians wouldn’t accept that level of uncertainty, says Breed, who was part of the NCAR team that analyzed the results, but for water managers in drought-prone areas, it’s a different story. “If you say, I’m 70 percent confident that this will have an impact, well, a lot of them will think that’s not too bad.”

Despite the careful planning that went into the study’s design, researchers ran into some practical problems once it was under way, says Terry Deshler, an atmospheric scientist from the University of Wyoming who worked on the project. It turned out that winds sometimes caused cross-contamination so that seeding may have reached the unseeded mountains that were meant to act as a control. If researchers eliminated cases with probable cross-contamination from their analysis, the increase in precipitation associated with cloud seeding rose to between 4 and 9 percent.

Similarly, wind and other issues sometimes prevented the full operation of the generators launching the seeding materials into the clouds. The study protocol called for eight generators to run for four hours during each seeding event, resulting in 32 so-called generator hours. If instances where seeding consisted of fewer than 27 generator hours were eliminated, the rise in precipitation grew as high as 17 percent. When the researchers presented their results to the Wyoming Commission, they estimated that cloud seeding boosted precipitation by five to 15 percent.

But is it legitimate to make these kinds of post-hoc adjustments, or are the researchers just parsing the data until it produces the result they’re looking for? I put that question to Richard Smith, a statistician at the University of North Carolina, Chapel Hill. Smith commended the Wyoming project researchers for carefully disclosing the ways in which they departed from their original protocol. “Have they proved their point? I’m inclined to say probably yes,” he says, with the caveat that the more dramatic numbers come from changes to the protocol that were made after the study was under way, an approach generally frowned upon in science.

It’s important to put the numbers in context, says Deshler, the University of Wyoming scientist. When he and a graduate student looked at climate data on these mountain ranges over the past eight years, they found that only about 30 percent of the precipitation that fell came from storms that had the right temperatures and wind directions to be seeded. If you assume that you can get a five to 15 percent bump in precipitation out of those storms, you’re now looking at a total increase of precipitation of only about 1.5 to 4.5 percent, he says. “Water managers need to be realistic about what the real benefit is. You can’t take that 15 percent and say that’s 15 percent more snow over the winter.”

Given those cautions, do these numbers make a difference in the real world? In some cases, yes, says Deshler. “If you can get a 10 or 15 percent impact on every storm you seed, and 30 percent of the snowpack comes from those storms, then yeah — those numbers are competitive.” In times of scarcity, water prices rise, so even tiny gains could be cost-effective.

The graph below, taken from Wyoming’s Water Development Commission report, shows the cost of cloud seeding versus the 2015 water rates in the North Platte River Basin. Solid lines depict the high and low end cost for seeding itself, and the dotted lines include the cost of evaluating the program’s effectiveness. These numbers show that for cloud seeding to reach cost-effectiveness in this area of Wyoming, it needs to raise precipitation rates by more than 10 percent (if the cost of measuring the effects is included). 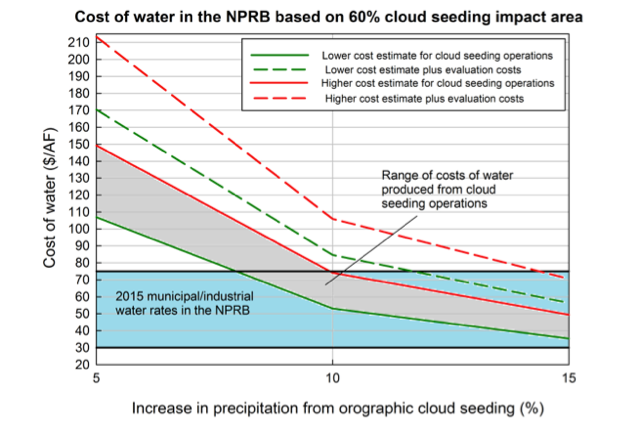 The Wyoming results mirror those of the Snowy Precipitation Enhancement Research Project, a similar study conducted in the Snowy Mountains of southeastern Australia in the winters of 2005 to 2009, which found a seven to 14 percent rise in precipitation with cloud seeding.

The main challenge standing in the way of verifiable cloud seeding programs is the cost of measuring results, says Michael Manton, a researcher at Monash University in Victoria Australia who was involved in the Australian study. “The natural variability of precipitation is so high that a 10 to 20 percent increase can easily be masked,” he says. Given the costs, we may never know precisely how well cloud seeding works. Studies like the Wyoming one require lots of time and money, so there’s not a lot of interest in replicating it, Deshler says. “People just want more water.”