Last week, California’s dry spell got a temporary reprieve thanks to an onslaught of Pacific storms. But the storms won’t be enough to turn back the state’s drought — one that, researchers say, is the region’s worst in the last 1,200 years.

California’s drought began in late 2011 and rapidly intensified. Reservoirs stand empty, and as of this month, the U.S. Drought Monitor has classified conditions in 79.7 percent of the state as being in “extreme” or “exceptional” drought.

To compare the current drought’s severity to that of previous ones, University of Minnesota dendrochronologist Daniel Griffin and his colleague Kevin Anchukaitis, a paleoclimatologist at the Woods Hole Oceanographic Institution, collected tree rings from California blue oaks. “These trees have an exquisite relationship to moisture — when there’s lots of precipitation, they put on a fat ring,” Griffin said. They calibrated those measurements with temperature and precipitation records from the National Oceanic and Atmospheric Administration and added data from the North American Drought Atlas, a compilation of drought records constructed from tree ring chronologies over the past 2,000 years.

The researchers calculated the current drought’s severity using the Palmer Drought Severity Index (PDSI), which rates drought conditions based on precipitation, and compared it to ones that occurred over the last 1,200 years. A PDSI value of 0 to -0.5 is considered normal, -2.0 to -3.0 is a moderate drought, and anything less than -4.0 rates as an extreme drought. The chart below shows PDSI values for central and southern California since the year 800. The dotted red line represents the 2014 PDSI.

But it’s not merely low precipitation levels that make the current drought extraordinary, Griffin said. It’s also exceptionally hot temperatures. California’s dry spell qualifies as a “hot drought,” where high temperatures evaporate whatever moisture is trying to make its way into the soil. The researchers calculated that record-high temperatures may have exacerbated drought conditions by about 36 percent. (The chart below is based on California temperature data from NOAA.) 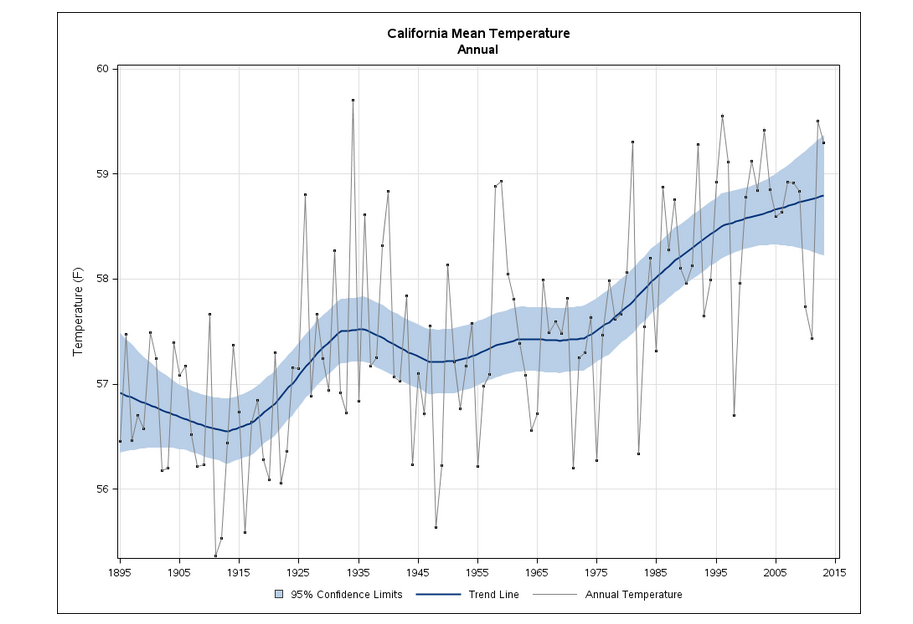 Given the study’s conclusion that extreme temperatures worsened the drought, global warming would seem like the likely culprit. But there’s disagreement over just how much record temperatures have contributed to California’s drought.

According to another study released this week by NOAA but not yet published in a peer-reviewed journal, natural climate variability — not global warming — bears most of the responsibility for the drought. The study found that a ridge of high pressure aptly dubbed the “Ridiculously Resilient Ridge” has been parked over the Pacific Ocean for three winters and blocked storms that would normally hit California.

The first dry winter arose during La Niña, a weather pattern that tends to produce such high-pressure ridges, said Richard Seager, a climate researcher at Columbia University’s Lamont-Doherty Earth Observatory and an author of the NOAA report. After La Niña, a large area of warm water arose in the western part of the Pacific. Using numerous atmospheric model simulations, Seager’s group found that this area of warm water perturbed atmospheric circulation to create the high pressure over the West Coast.

This is the first study to show that a West Coast dry pattern could be triggered by warmer water anomalies in the tropical western Pacific. Seager said researchers feel “pretty confident” about the association because it shows up in all their models. (One objective of the study was to look for factors that could help predict future droughts.)

At first glance, Seager’s report appears to contradict Griffin and Anchukaitis’s conclusions about heat’s contributions to the drought, but Griffin said the two studies are “complementary and not in conflict.” The difference comes down to methods and design. The NOAA study focused on precipitation, while Griffin’s study also took into account temperatures. The latter also examined California’s most drought-prone regions, whereas the NOAA study focused on the state-wide average. “Their finding is that the precipitation of this event is very much in line with what we’ve seen in the record, and that’s our finding too,” Griffin said. “The precipitation deficits here are low, but not unprecedented.”

According to NOAA records, the period of November 2013 to April 2014 was California’s warmest winter period on record. Seager said that warming probably had a modest add-on effect as water falling from the sky evaporated before it could wet the soil or fill the streams, but he said that this drought was mostly driven by the dramatic drop in winter precipitation. “That’s not what we expect as a result of human-induced climate change,” he said. Instead, climate models predict that global warming should increase precipitation in the middle of the winter and reduce it in the spring.

Regardless of what the models show, the NOAA study doesn’t provide the final word on climate change’s role in the drought, said Jonathan Overpeck, a climatologist at the University of Arizona who has studied drought in the Southwest. “Seager and his colleagues are all excellent scientists, but they’ve focused on only one component of the drought and done it with complete reliance on climate models,” Overpeck said. “They’re assuming that our climate models capture variation and change perfectly and that you can use these climate models to determine whether what we see is due to human causes or natural variations.” Overpeck called it “misleading” to attribute a cause to the drought based only on precipitation without taking temperature into account.

The complex, dynamic nature of our atmosphere and oceans makes it extremely difficult to link any particular weather event to climate change. That’s because of the intermingling of natural variations with human-caused ones. Teasing apart their relative contributions is tricky, Overpeck said, but “the unnatural component is getting larger and larger as global warming is having a bigger and bigger impact on climate systems.”

The NOAA report did not dispute that California’s climate is warming. “Record setting high temperature that accompanied this recent drought was likely made more extreme due to human-induced global warming,” it said. The point of disagreement comes over whether or to what extent these rising temperatures created the drought.

Kevin Trenberth, head of climate analysis at the National Center for Atmospheric Research, sent a commentary to reporters that said the NOAA study “completely fails to consider what climate change is doing to water in California.” The study neglected to examine the increased drying associated with global warming, he said. Global warming related to greenhouse gases creates extra heat that enhances drying, increases risk of heat waves, and greatly increases risk of wild fires, he said.

In a blog post, Penn State climatologist Michael Mann wrote that while he believes that Seager’s study was “done in good faith,” the results are contradicted by many other peer-reviewed studies, and he worries that the announcement of these “flimsy” conclusions at a NOAA press conference will get in the way of necessary conversations about climate change’s contribution to California’s water problems.

Regardless, California’s water woes seem destined to get worse. Overpeck and some of his colleagues consider the California drought a continuation of a broader one across the Southwest that began in 1999. The drought has moved around the region, with the hardest-hit areas including, at various times, Arizona, Utah, New Mexico, Texas and now California. In each case, precipitation deficits haven’t hit record lows, but unusually high temperatures have made many of the impacts on vegetation and water resources the worst since at least the 19th century. “Scientists have attributed this unusual heat largely to human-caused global warming,” Overpeck said.

CORRECTION (Dec. 15, 12:25 p.m.): This article originally misidentified how Griffin and Anchukaitis calibrated their tree ring measurements to model past droughts. They used precipitation records, but not temperature records.