Equities markets are up around 4 percent as of about 12:45 PM Eastern time. (Credit markets, we should caution, have had a more tepid response).

A couple of weeks ago I introduced something called the Cyclical Expectations Index, which is the ratio of the share prices of consumer discretionary products (which are thought to be more cyclical) to consumer staples. My hypothesis is that the CEI is a better gauge than broader stock indices for what the market really thinks about the economic variables that are important to most of us — like GDP growth and unemployment.

Here’s how the CEI has performed since September 15th, with the S&P 500 represented on the same scale: 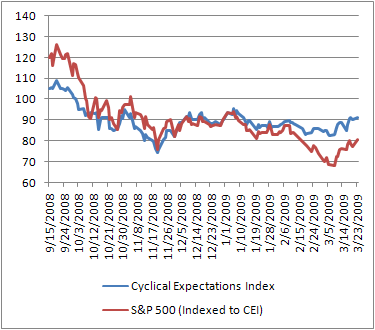 In general, the CEI has been much more stable than the S&P 500. Since roughly mid-November, when credit markets stabilized somewhat, investors have neither gotten particularly more optimistic nor particularly more pessimistic about the near-to-medium term state of the economy, somewhat belying the relatively large fluctuations within the S&P. Just as the S&P had declined much more sharply than the CEI in February, the slight run-up in the CEI in March is not a match for the much steeper gains achieved by the S&P 500.

Likewise, while the CEI is up today — to 91.2 as of this writing, it’s highest value since January 9 — that isn’t a match for the 4%+ gains made by the S&P. Today’s rally, then, probably falls more into the Wall-Street-thinks-this-is-good-for-Wall-Street category.

On the other hand, the market may be shedding some of its risk-averseness. This is a nontrivial consideration, because essentially the whole debate over whether the Geithner plan is a good one or not boils down to whether the “toxic” assets that the government is trying to extricate from bank balance sheets are being undervalued by the markets in a sort of negative bubble.

I’ll put it like this: the fact that Wall Street has reacted well to the Geithner plan today is by no means a sufficient condition for its success. But it is probably a necessary one. If the markets did not believe that the plan had a chance of success, there’s little chance that it would.