As you’ve probably recognized, it is very difficult to do objective analysis of the Vice Presidential derby contenders. But let’s try one little thing out.

Essentially all of the principal players in the Democratic Veepstakes — and many of the Republicans — are sitting Senators or Governors. While national approval ratings for these candidates are utterly useless at this stage of the cycle — few voters have any opinion of them outside their home states — local approval ratings might give us some hint about how these candidates are likely to wear over time.

So what I did was as follows. Firstly, I took the average of all approve/disapprove and favorable/unfavorable polls I could find on these candidates in 2008. Only the most recent survey from any given polling firm was used. Where no polls were available in 2008, I used the most recent one I could find.

Then, I compared this approval average to the partisan ID advantage (or disadvantage) of that candidate’s party in 2004 exit polling. Subtracting the approval average from the partisan ID index gives us what I call the candidate’s power rating. Essentially, this is the extent to which the candidate is able to defy gravity and run ahead of the political demographics of their state.

Firstly, let’s look at the Democrats. We’ll take all candidates on the media-reported short list — excluding Sam Nunn, who has been out of office too long — and throw in Bill Richardson and Brian Schweitzer. And no, we haven’t seen those guys on anybody else’s short lists, but we have heard rumors that Obama met with Schweitzer earlier this month. 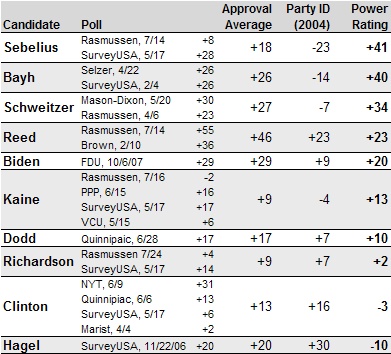 Three of the Democrats have exceptionally impressive numbers: Kathleen Sebelius, Evan Bayh, and Brian Schweitzer. All of these candidates are not just surviving in red states, but thriving, with substantially positive approval scores. Sebelius’ number is especially impressive as she has the most progressive governance record of the three, but in any event, these candidates have proven track records of appealing to voters across the aisle.

Jack Reed and Joe Biden are holding up just fine. Tim Kaine’s and Chris Dodd’s performances are a little more marginal. Bill Richardson and Hillary Clinton aren’t really doing any better than you’d expect from a Democrat in their states, but sometimes running for President can harm a candidate’s local numbers in the near term.

Now, let’s look at a selection of Republicans — including Mitt Romney and Mike Huckabee, who are no longer in office, but who retired recently enough that we can still track down their SurveyUSA results. 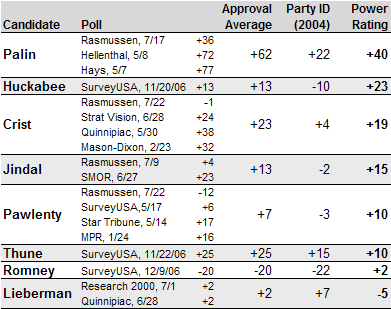 By this metric, Sarah Palin should be the runaway favorite — the +70 approval ratings she managed in a couple of polls in May is almost literally unheard of. But her standing has tarnished a bit after her recent mini-scandal; she now polls at “only” a +36. Do I think that Palin would be a good choice for John McCain? I happen not to, because I think the age and experience gap would be exceptionally awkward. But she certainly is a very bright prospect.

The rest of the Republicans are pretty closely bunched together, with the exception of Mitt Romney — who left office with a -20 approval rating — and Joe Lieberman, who would be an awfully risky selection by McCain.