The net migration of people from blue states into red states has not reversed itself, but it did slow down significantly in 2008, as I write in a new column at Esquire, in such a way that could cost the Republicans a couple of electoral votes once things are reallocated in 2012.

This is presumably mostly a matter of the economic crisis, and since both unemployment and, particularly, housing prices are lagging indicators, the trend will presumably perpetuate itself into 2009 and possibly 2010.

I also play around with the far more speculative notion that red states are kind of uncool now — most people who move long distances do so when they’re young, and Republicans are quite unpopular with young people these days. Then again, maybe it’s just that Republicans are following Michelle Bachmann’s lead and hiding from the Census Bureau. Anyway, you can read the whole piece over there. 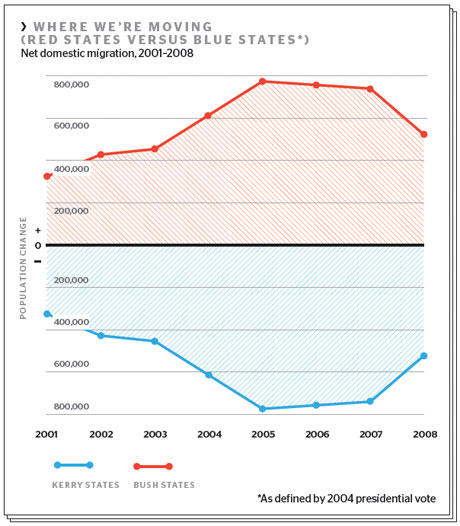