On Tuesday, Sen. Kamala Harris abandoned her once-promising presidential campaign, making her the most significant Democrat to drop out of the race so far. After averaging 15 percent nationally at one point, Harris had fallen to about 5 percent in national polls, so while there isn’t exactly a ton of support now up for grabs, her voters will still have to pick someone else.

New polling from Morning Consult suggests, though, that Harris’s exit won’t necessarily create a dramatic shift in the race. If Harris supporters go with their second-choice picks, it’s the current slate of front-runners who stand to gain: Former Vice President Joe Biden, Sen. Bernie Sanders and Sen. Elizabeth Warren would each gain about 1 point.

We’ve been tracking voters’ second-choice preferences throughout the Democratic primary, and although Harris’s departure is unlikely to shake up the race, it’s a good time to check back in on where voters’ preferences stand, as this can help us understand who stands to benefit if one of the candidates falters in the polls.

When we last looked in October, Warren was the leading second-choice pick among Biden supporters, running counter to the conventional wisdom that Biden and Warren supporters might be firmly at odds with one another because of ideological differences. But looking at the latest Morning Consult data, there has been a shift: Sanders is now the leading alternative for Biden voters, although that might have less to do with ideology and more with Warren’s recent drop in the polls. Sanders, on the other hand, has remained formidable despite his health scare earlier in the fall. Overall, Biden was the first choice pick for 29 percent of respondents, Sanders for 20 percent, Warren for 15 percent, Buttigieg for 9 percent and former New York City Mayor Michael Bloomberg for 5 percent. 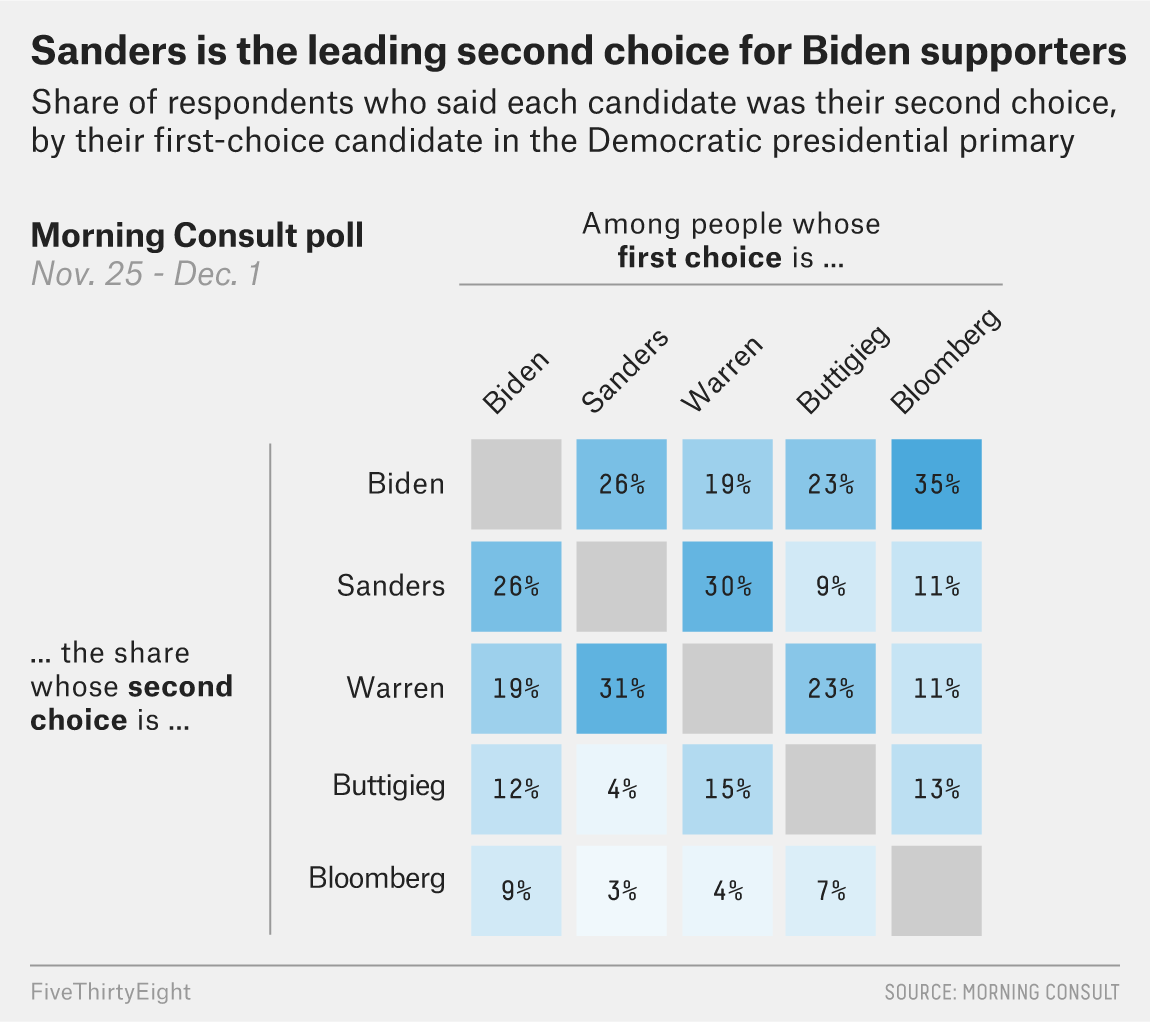 However, there are some signs of “lanes” in that Morning Consult data. For instance, there is a slight preference among Sanders’s supporters for Warren over Biden, and more Warren supporters name Sanders as their top second-choice pick. There’s also some overlap between Warren and Buttigieg, who have strong bases of support among white college-educated voters. Fifteen percent of Warren supporters named Buttigieg as a second choice, while 23 percent of Buttigieg’s backers picked Warren as their top alternative. However, Buttigieg may have as much to gain from Biden as Warren, given that 12 percent of Biden boosters picked Buttigieg as their second choice. This survey also allows us to look at Bloomberg in depth, who in his late bid for the presidency has angled himself as an alternative to Biden. But while Biden is clearly Bloomberg supporters’ second-choice pick, the former mayor has his work cut out for him — only 9 percent of Biden’s backers named Bloomberg as their second choice pick.

One other recent poll from Quinnipiac University also had second-choice voter data, and its findings were pretty similar to Morning Consult. Biden was in the lead again for first-choice support with 24 percent, followed by Buttigieg with 16 percent, Warren with 14 percent and Sanders with 13 percent. And among these candidates who polled 10 percent or higher, Warren was the top second choice for Sanders supporters and vice versa, while Buttigieg backers picked Warren. There was one small difference from the Morning Consult survey in that Biden voters in this poll preferred Warren over Sanders, although it was very close (19 percent Warren, 16 percent Sanders). It’s important to note, too, that this poll’s sample size was much smaller than Morning Consult’s (574 respondents compared to over 15,000). 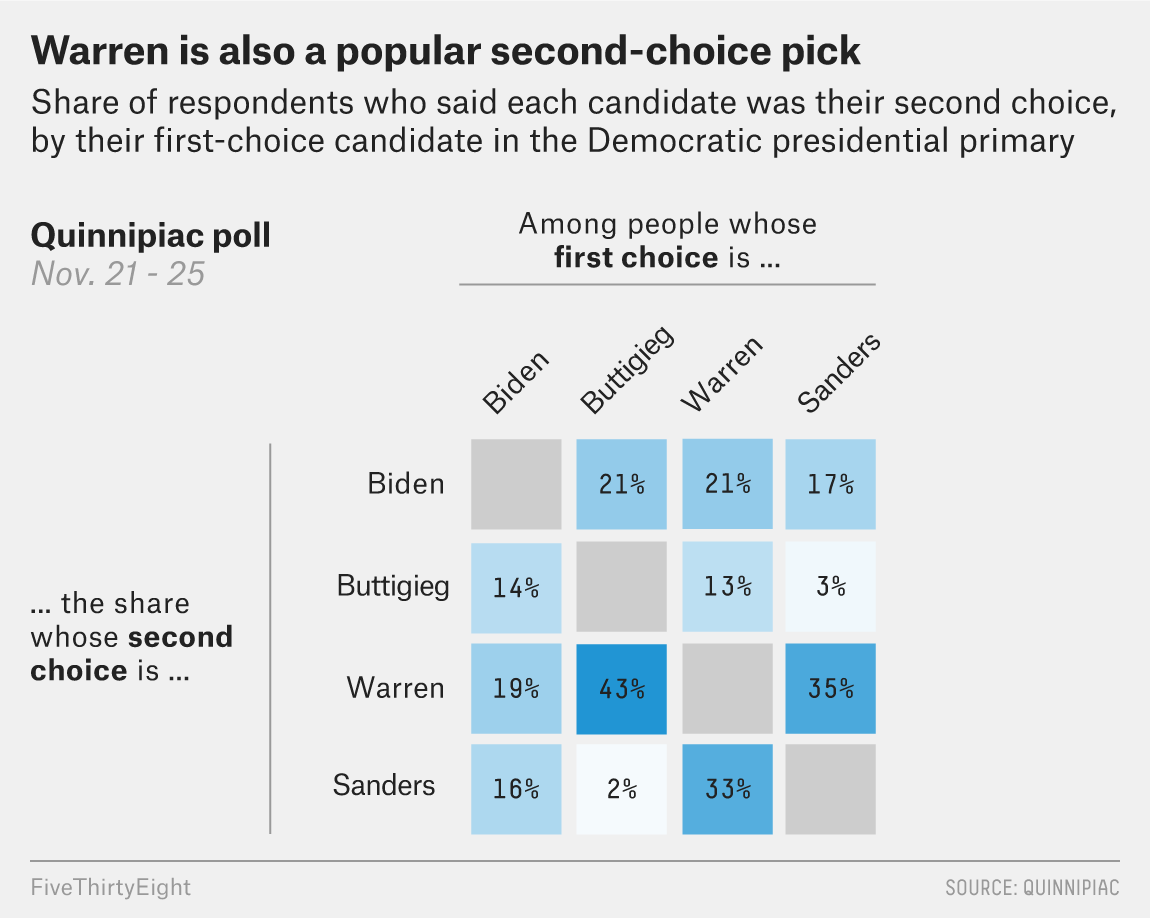 Together, these two polls suggest that the supporters of the more ideologically left-leaning candidates — Sanders and Warren — are more in sync than they were when we last looked in October, but of course, this has its limitations. A sizable share of Sanders and Warren supporters still put Biden as their second-choice pick despite ideological differences. Not to mention, even though Buttigieg has positioned himself as a critic of Warren, there is still a strong preference for Warren among Buttigieg’s backers — and there’s some support for Buttigieg among Warren supporters, as well. So for all the talk of “lanes” in the 2020 Democratic primary, the lines still remain somewhat blurry. 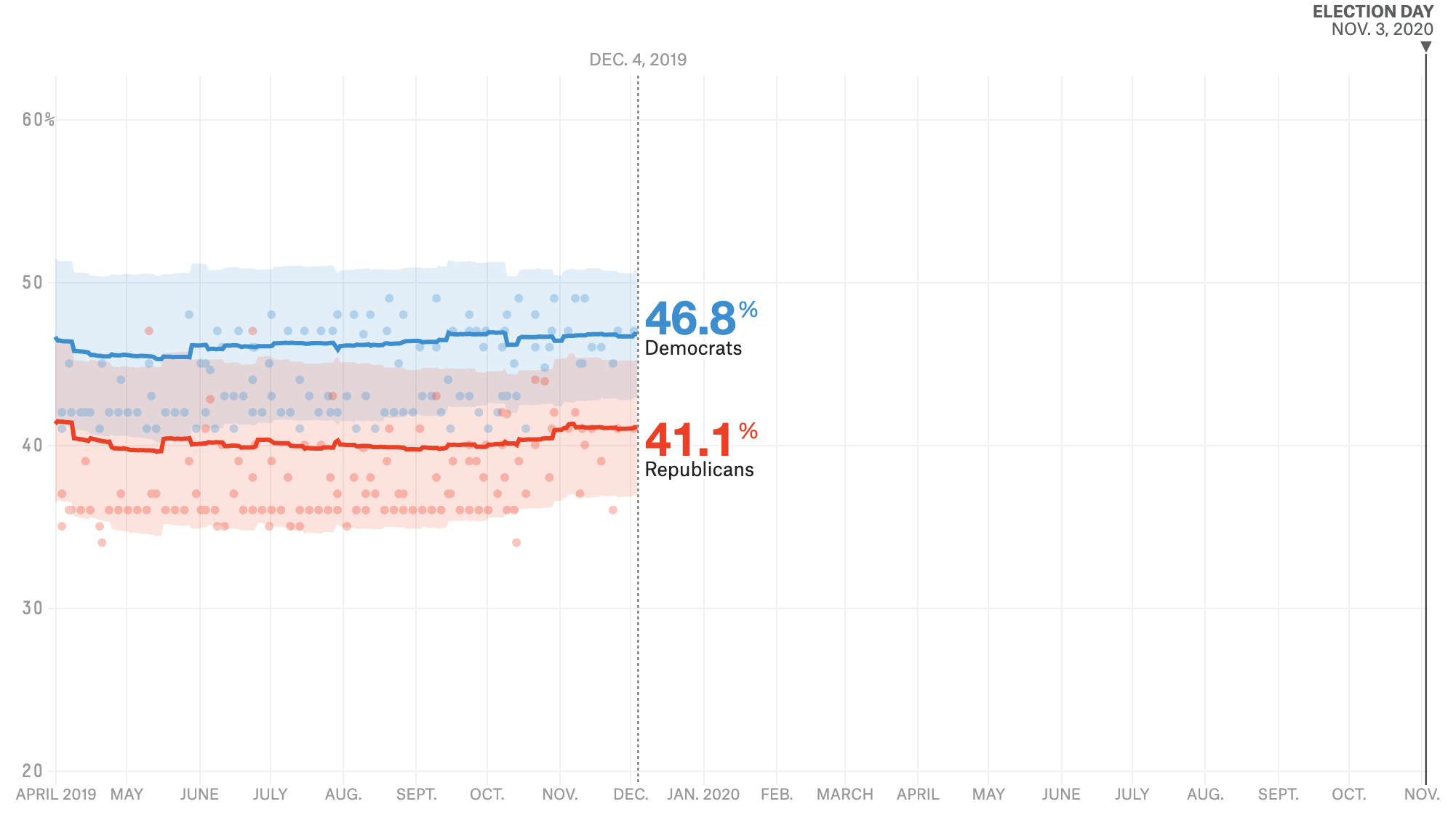