There is fairly close to a 1:1 correspondence between the party ID gap and the Obama-McCain gap, so these new registrations alone account for about one point’s worth of the gains that Obama has made in North Carolina since the summer. 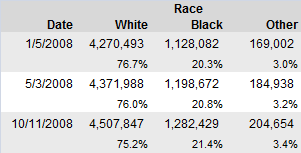 Assuming that Obama captures 35 percent of white voters, 95 percent of black voters, and 60 percent of “other” voters, the change in the racial composition of the electorate since the first of the year is worth a net of about 1.5 points to Obama in his race against McCain.