8:54 EDT [Ed]: A few other random notes are in order before we turn off the liveblog and spend a little time mulling over deeper thoughts for posting tomorrow. With 88% of the precincts reporting, and a lot of those still out in high-population areas like Fairfax and Richmond, 266,000 votes have been cast in this primary, over the 250k most often predicted. Looks like PPP’s “high” estimate of 300,000 votes could be close to right.

And maybe it doesn’t matter that much except for the pride of the participants, but it’s still not clear who will finish second behind Deeds. At the moment, McAuliffe’s running just under 7,000 votes ahead of Moran. Of the precincts still out, the biggest blocs are in Fairfax, where Moran’s been running about eight points ahead of McAuliffe; in the City of Richmond, where their positions are reversed; and in Roanoke, in a region where Moran has been running very poorly. Unless the Fairfax numbers are very big, looks like McAuliffe will probably hold onto the consolation prize, such as it is.

8:37 EDT [Nate]: Well, I think both parties are going to go into November with a candidate they’re feeling pretty happy about. And the stakes are fairly high: given Virginia’s newfound status as a swing state, whomever wins is a decent bet to make a VP short list in 2012 or 2016.

8:24 EDT [Ed]: So in addressing the three analytical factors I posed last night in anticipation of this primary, you’d have to say that: (1) yes, the Persuasion camp in the Persuasion-versus-Mobilization debate on how to win low-turnout primaries got a nice talking point for the future, since there was no Deeds Machine in sight today, while the highly-organized Moran and McAuliffe GOTV efforts missed most of their marks; (2) no, you can’t chalk it all up to the Washington Post endorsement, given the margin of Deeds’ win and its breadth, far beyond the DC media market (though the endorsement was a good momentum generator); and (3) no, the race wasn’t at all close enough for Virginia’s relatively restrictive early voting rules to matter.

8:15 EDT [Ed]: If I were Bob McDonnell, I wouldn’t be real happy about tonight’s results. Deeds showed no real regional weaknesses, and with all due consideration of the problems that Moran and McAuliffe caused themselves and each other, it does look like the Bath County senator knows how to run a campaign. The win was decisive enough that there shouldn’t be too many hard feelings among Democrats, and Deeds will get some nice media buzz. And let’s don’t forget that Deeds basically tied McDonnell in the AG race four years ago, despite being outspent. The first couple of head-to-head polls between Deeds and McDonnell should be very interesting.

8:00 EDT [Nate]: This really is looking like a collapse of Howard Dean in Iowa proportions for McAuliffe; he had the lead just two weeks ago and now he’s about to lose by 20+ points. Just for fun, here’s another version of the Iowa polling in 2004, this one generously provided to 538 by Ann Selzer of top-ranked polling firm Selzer & Co. 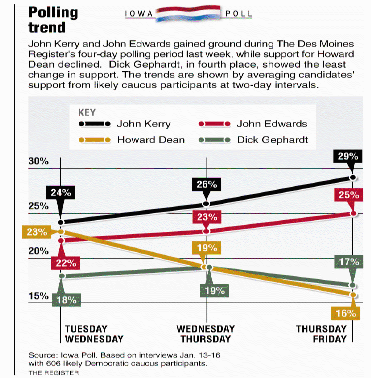 7:50 EDT [Ed]: With the votes now pouring in, Creigh Deeds is winning in nine of Virginia’s eleven congressional districts (Moran narrowly leads in the 8th on the strength of his Alexandria performance, but the lead probably won’t hold, and McAuliffe leads narrowly in the 3d, with Richmond still out). This is quite a statewide victory for Deeds.

7:45 EDT [Nate]: OK, the 538 decision desk is calling this one for R. Creigh Deeds. Almost half the vote is in, and although we’re a little bit light on turnout from areas like Richmond, neither Moran nor McAuliffe is doing anywhere near as well as they’d need to to make up for Deeds’ large advantage. It’s really a battle for second place at this point.

7:38 EDT [Ed]: Very bad signs for Brian Moran. He’s winning Alexandria handily, but Deeds is beating him in Arlington, Fairfax, Loudon and Fauquier by big margins. And McAuliffe isn’t doing well at all in NoVa so far.

7:29 EDT [Nate]: Below is a map of Virginia’s Congressional Districts; you can see the results as they come in by CD here.

7:20 EDT [Nate]: Deeds’ strength in the rural part of the state is overwhelming — we don’t have many results in from NoVa yet but I don’t know I see how McAuliffe gets enough votes there to make up for Deeds’ huge margins elsewhere in the state, particularly with Moran eating into some of the NoVa vote.

7:18 EDT [Ed]: Took a quick look at the official returns page, and the early precincts are mostly in Deeds’ base area: Staunton and vicinity. His statewide lead was significantly diminished by a single precinct from Henrico coming in for T-Mac.

7:00 EDT [Ed]. The polls are about to close throughout Virginia, so we’ll be having some commentary and analysis from the 538 crew as the results come in.