There’s this meme out there, one that I’m sure that I’ve helped to perpetuate at one time or another, that a lot of Clinton supporters have become so fervent in their support of their candidate, or so burnt out by the primary process, that they will not vote for Barack Obama in November. The same perception exists to a lesser extent for Obama supporters.

It’s true that there there are a relatively large number of ‘defectors’ this year — self-identified Democrats who may vote for John McCain in November. This is especially true for Barack Obama. However, this does not appear to be the result of the primary process itself. On the contrary, party loyalty within the Democratic Party has gradually been increasing as the primary season has worn on.

Each month since November, SurveyUSA has been put out McCain-Obama and McCain-Clinton surveys in fifteen states where it has media clients: Alabama, California, Iowa, Kansas, Kentucky, Massachusetts, Minnesota, Missouri, New Mexico, New York, Ohio, Oregon, Virginia, Washington and Wisconsin. This happens to be a relatively good mix of regions, and red, blue and purple states.

For each set of monthly polls, I compiled the average amount of support that Clinton and Obama won from Democrats, Republicans and Independents, as identified in SurveyUSA’s cross-tabulations. I threw any undecided votes out, so what I was left with the two-way vote share between the Democrat and McCain. This is a lot of data to work with: approximately 8,000 interviews each month. The tabulation of those results is below. 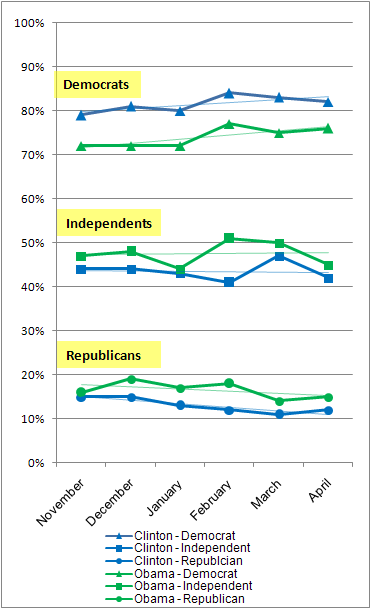 What do we see here? Obama has a rather high defection rate — an average of 24% of Democrats in the SurveyUSA states presently say they’ll vote for John McCain. By comparison, 11% of John Kerry’s Democrats defected to George W. Bush in 2004. However, while Obama’s defection rate is high, it’s actually lower than it was a couple of months ago. Whereas Obama got the support of 72 percent of Democrats in each of November, December and January, those numbers have improved to 77-75-76 in the last three months. Clinton has been receiving more votes from Democrats as well — 82 percent in April, versus 79 percent in March.

And where have Democrats been losing support? From Republicans. Obama is down to 15 percent of the Republican vote after peaking at 19 percent in December; Clinton is at 12 percent after being at 15 percent in November and December. The behavior of the independents, meanwhile, has fluctuated from month to month and accounts for most of the noise in the data, but without any clear long-term trend (other than Obama consistently outperforming Clinton amongst this group).

If we like, we can extrapolate these trends all the way out to November: 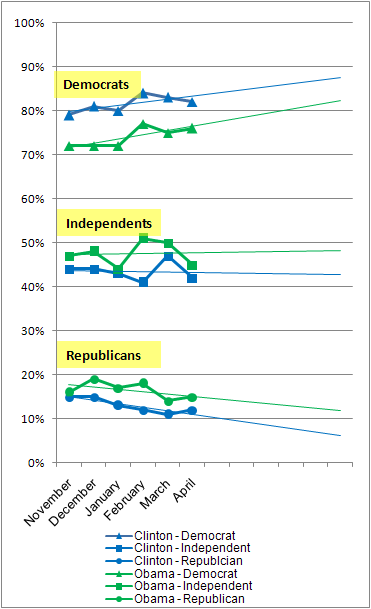 Nevertheless, Obama’s defection rate is high — and to a lesser extent so is Clinton’s. If we reject the hypothesis that this is because of the primary process itself, we need some alternative explanations:

1. John McCain is a strong opponent. I think John McCain gets too little credit. There was a point in time a year ago when he was not only the presumptive Republican nominee, but the presumptive #44, and when many Democrats I knew were openly fearful about running against him. While McCain has hit some bumps in the road since then, he remains far stronger than the other nominees the Republicans might have selected. Let’s compare, for instance, the defection rates in January against a man who truly embodies the term ‘generic Republican’: Mitt Romney. 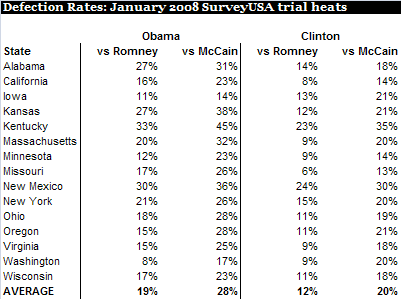 In January, about 28 percent of self-identified Democrats were ready to defect to McCain in an Obama-McCain matchup, but just 19 percent to Mitt Romney in an Obama-Romney matchup. And 20 percent planned to defect to McCain in a Clinton-McCain matchup, but just 12 percent to Romney in a Clinton-Romney matchup. Not only is McCain objectively a fairly strong candidate, but he also has a higher-than-usual amount of bipartisan appeal — particularly since, given the focus on their own campaign, the Democrats haven’t really been able to brand him as a conservative.

This might seem to contradict what I said before about the primary campaign not being responsible for the high defection rate — so let me be more precise about what I’m arguing. I’m not arguing against the notion of the unity bounce. But I am arguing that the length of the campaign isn’t responsible for the high defection rate — if it were, the defection rate would have been increasing. In fact, the campaign might prove to be helpful in states like Indiana and North Carolina, which have been completely ignored by Democrats in recent years, but which are plausible swing states on a good Election Day.

The problem is not with when the campaign might end, but how the campaign might end — there are substantial risks if a large number of Democrats do not perceive the nominee as legimiate. And that could be a problem: according to a NBC/WSJ poll conducted last month, a 41-32 plurality of Democrats would not perceive the nominee as legitimate if the superdelegates overrode a pledged delegate majority. At the same time, some Democrats might not perceive Barack Obama as legitimate if the party was perceived as pushing Hillary Clinton aside before she was ready to go.

By the way — it may also be the case that the fraction of Clinton supporters who won’t vote for Obama is increasing. This is because Clinton’s support has gradually but steadily been decreasing. If there is 15 percent of the Democratic base that won’t vote for Barack Obama against absolutely anyone, they will constitute a larger share of Hillary Clinton’s support when she’s polling at 41 percent versus when she was polling at 52 percent. But the number of defectors is not increasing as a share of the Democratic electorate — in fact, just the opposite is true. Clinton supporters are behaving not behaving punitively to Obama, nor are Obama supporters behaving punitively to Clinton.

Instead, the media has been thrown off the trail by the order in which the primaries happen to take place. If Tom Brady throws for 400 yards one week in perfect weather against the Dolphins’ secondary, and 200 yards the next week in sub-zero conditions against the Packers’ secondary, it is not like Brady became a worse quarterback: that is about what we would expect from Brady given the contexts he was competing in. And likewise for the Democrats. For Clinton, Virginia is like facing the Packers, and Pennsylvania is like facing the Dolphins. For Obama, just the opposite is true. Our demographic analysis of Pennsylvania, based on everything we knew about the way the Democrats had split the vote up so far, suggested that Hillary Clinton would win by a margin of 7.4 points; she actually won by 9.1 points. That estimate, which looked at no polling data at all, was more accurate than 8 of the final 10 polls of the state. It looks like the Democrats are exchanging blows, trading whole subgroups of voters between them with every contest, but all they are really doing is fulfilling their manifest destiny.