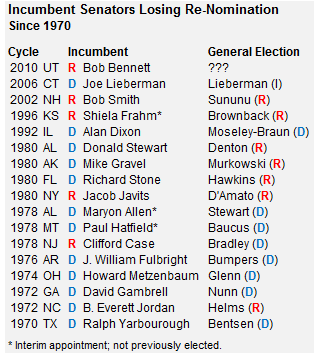 Republican incumbent senator Bob Bennett was dropped from consideration on the second ballot at Utah’s nominating convention, finishing a somewhat distant third place to candidates Mike Lee and Tim Bridgewater. Although this contingency had appeared to be quite likely based on pre-convention polls of delegates, it was obviously very disappointing for Bennett, the three-term incumbent, who was reported to be in tears afterward. Bennett pledged to support the eventual nominee.

Although a dramatic development in a state which rarely makes political headlines, my guess is that people are going to read a bit too much into the national implications of this. The 3,500 delegates who select Utah’s Republican candidates — chosen at local precinct meetings — are highly informed and extremely conservative activists who are not representative of Utah Republicans as a whole nor the Republican primary electorates in other states. Some polling has suggested that Bennett would have been favored to win a conventional primary, although there were no guarantees.

The two prospective Democratic nominees, Sam Granato and Christopher Stout, are inexperienced. In such a ruby-red state, they are unlikely to pose much threat to Lee or Bridgewater in the general election.