Today we continue our Presidential Geography series, a one-by-one examination of the peculiarities that drive the politics in all 50 states and the District of Columbia. Today’s stop: Utah, the Beehive State. FiveThirtyEight spoke with Tim Chambless, a political science professor with the Hinckley Institute of Politics at the University of Utah.

If only Grover Cleveland could have known.

On Jan. 4, 1896, President Cleveland, a Democrat, made Utah the 45th state. One hundred and sixteen years later, Utah is perhaps the most Republican state in the union, having voted Republican by at least 19 percentage points in every presidential election after 1964. 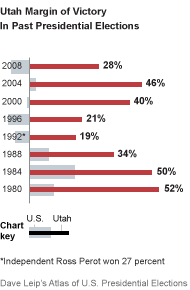 Its majority Mormon population makes the state very conservative on social issues, and in 2012, Utah is probably a safer bet to vote for Mitt Romney, himself a member of the Church of Jesus Christ of Latter-day Saints, than the District of Columbia is to vote for President Obama.

But the constancy of Utah’s conservative instincts in presidential elections is only recent, and it obscures a more moderate inclination on some issues. The reason Utah is so Republican in presidential elections – the influence of Mormonism on Utah’s culture and politics – is also one of the reasons the state has taken less hard-line positions in other arenas, like immigration.

Just over 62 percent of Utah is Mormon, and 75 percent of Utah voters in 2008 identified themselves as Mormon, according to exit polls. The Mormon faith colors Utah culture to a remarkable extent. Among the faithful, consumption of alcohol, tobacco and caffeine is prohibited. Families are big; Utah has more children per capita than any other state and the lowest rate of out-of-wedlock births. Utah also has the highest rate of volunteerism in the nation. 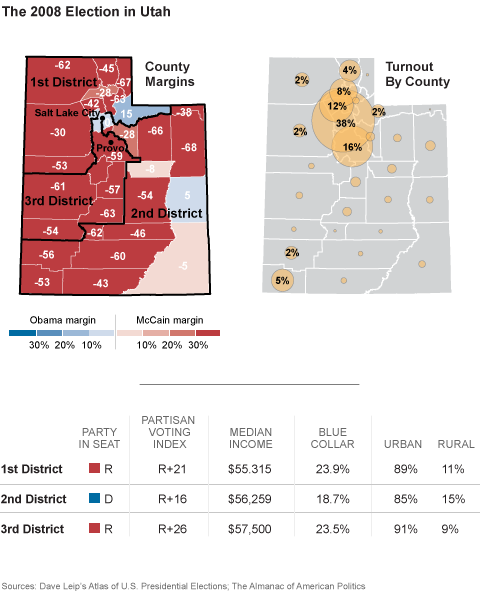 In today’s politics, Utah’s majority Mormon population translates into an overwhelming Republican advantage in presidential elections. But that wasn’t always the case. “Until the beginning of the 1970s, Utah’s partisan politics was very divided and balanced,” Mr. Chambless said. Then, on a range of issues, from Roe v. Wade to the Vietnam War protests, “it was the state’s Republican Party that seized the popular political positions.”

But on other issues, Utah has taken more moderate stances than might be implied by the state’s voting record. For instance, Utah has tended to vote more Republican than Arizona, but Utah has taken a much more moderate approach to illegal immigration than Arizona — in large part due to appeals from L.D.S. leaders, Mr. Chambless said. Thirteen percent of Utah’s population is Hispanic, and more than 100,000 illegal immigrants are estimated to live within its borders.

Rather than follow Arizona’s lead, Utah, in March 2011, became the first state to establish its own guest worker program, in which illegal immigrants without a criminal record who pay a fine can get a work permit. Utah is one of only three states where illegal immigrants can legally drive a car. 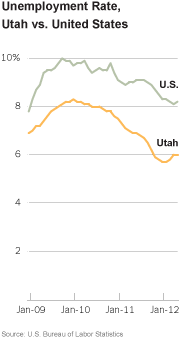 Indeed, without the strong social conservatism of the Mormon faith, Utah might be a bit more amenable to Democratic candidates. Although geographically the state is rural, demographically Utah is urban. Vast expanses of the state in the south are devoted to national parks, but about 75 percent of the state’s population lives in small cities and suburbs in the Wasatch Front, from Provo north through Salt Lake City to Ogden.

Salt Lake City has become more diverse, and Salt Lake County is now a swing county in some elections. Mr. Obama carried it by 296 votes in 2008, and the Republican governor, Gary R. Herbert, won it in 2010 with 51 percent of the vote. Liberal pockets can be found, of all places, right around the L.D.S. headquarters in Salt Lake City, where many professional, non-Mormon migrants have settled. To the east, Park City, home to the Sundance Film Festival, is also fairly liberal.

To the west of Salt Lake City, affordable suburban housing has made Tooele one of the fastest-growing counties in the state. In the 2000 election, Tooele was 4 to 6 percentage points off of each candidate’s statewide vote share. But Tooele County’s rapid population growth has made it a better barometer for the statewide margin in the last two elections, missing by 1 percentage point or less.

Mr. Romney has a 100 percent chance of winning Utah’s six electoral votes, according to the current FiveThirtyEight forecast. And that seems low.

Utah has been safe Republican territory in recent presidential elections. Add to that the fact that Mr. Romney and a majority of Utahans share a faith and that Mr. Romney spearheaded the Salt Lake City Olympics, and the question Utah politicos are asking themselves isn’t who will win the presidential race in the state, but whether turnout for Mr. Romney will also wash away down-ballot Democrats.

Utah’s Mormon majority has shrunk slightly. But as long as
it is still a majority, and as long as Democrats nominate pro-choice, pro-same-sex marriage presidential candidates, Utah will probably remain Republican.