You may not remember the vault. You probably remember her face.

In 2012, McKayla Maroney performed at the Olympic Games what was deemed by women’s gymnastics judges and commentators as perhaps the best-executed vault in the history of the sport. Her jaw-dropping Amanar, which includes two-and-a-half twists, came in the team portion of the competition:

But in the Olympics’ event finals, when gymnasts can win individual medals on apparatuses, the then-16-year-old American landed on her behind on an easier vault. That landed her the silver medal.

Maroney wasn’t impressed, but she wasn’t deterred either. She returned next season with the same tough skill and won her second world vault title.

Maroney is the highest flier in a recent line of fantastic American vaulters. But before 2005, only one American woman had ever won a medal in vault at the Artistic Gymnastics World Championships: Brandy Johnson tied for silver in 1989. A decade-and-a-half later came Alicia Sacramone, who won four of the eight medals the U.S. has claimed in the event since 2005 — gold (2010), silver (2006) and bronze (2005 and 2007). And since 2009, the American women have won four world vaulting titles.

There’s a good chance the medal streak will continue in 2014. Maroney is sitting out the world championships this week in Nanning, China, following knee surgery, but Simone Biles (the current U.S. and world all-around champion) and Mykayla Skinner have qualified to compete in Saturday’s vault final. Of note, Biles posted the highest qualifying score for the vault, balance beam, floor exercise and all-around.

Long gone are the days of the perfect 10. In vaulting finals, gymnasts perform two vaults from two groups, and each earns two marks — one for difficulty and one for execution. The difficulty score is predetermined and higher if there are more saltos and twists. For example, the Amanar that Maroney and Biles (below) generally perform has a 6.3 difficulty value, downgraded in 2013 from a 6.5; Skinner’s Cheng is worth 6.4.

The execution mark is out of 10 and considers the gymnast’s form on the vaulting table and in the air; her height and distance from the table; and how she lands (i.e. whether she “sticks” the landing). Those values sum to produce a total score for each vault. The average of the two total scores determines the gymnast’s final score.

So, Americans are good at vaulting, but just how good are they at eking out the best scores for particular vaults? I used results provided by USA Gymnastics to plot the 76 vaults completed in the most prestigious vaulting event each year since 2009 (for every season except 2012, an Olympic year, that event is the world championships). As the chart below shows, U.S. gymnasts have generally received some of the best execution scores for vaults at the highest levels of difficulty. (A technical note: I plotted only the raw difficulty and execution marks prior to penalties. I omitted four vaults that received a total score of 0.00; a gymnast earns a 0.00 if, for instance, she fails to land on her feet first, or touches the springboard or table without completing the vault.) 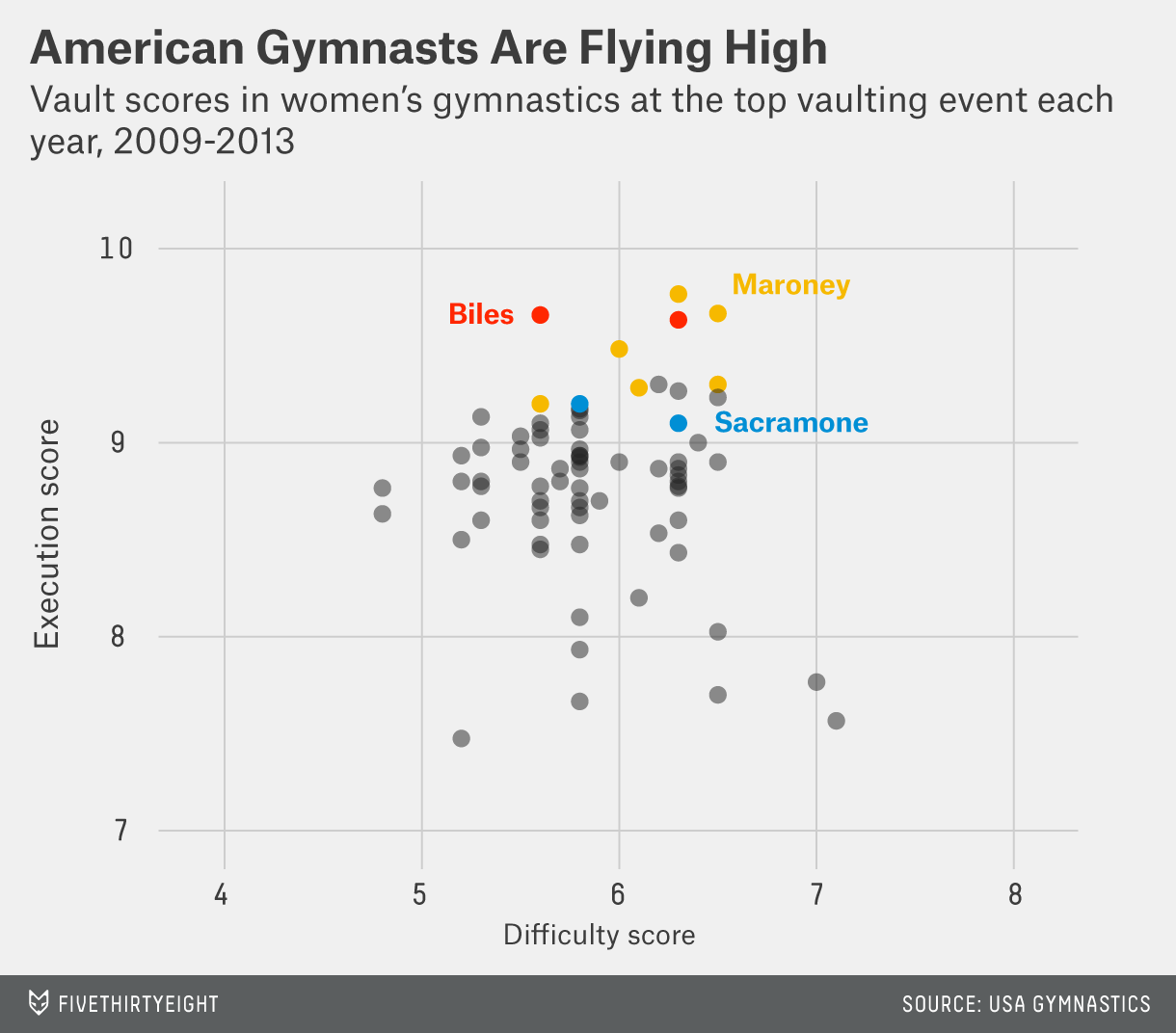 The two outliers in the bottom right corner belong to Yamilet Peña Abreu of the Dominican Republic, who lacked in execution while performing the demanding Produnova at the London Games and the 2013 world championship. (At the 2011 world championships, she landed on her back and earned a 0.00.) Last year, the vault — a front handspring onto the table followed by two front somersaults — was downgraded by 0.1, to a difficulty score of 7.0. Peña Abreu was the first gymnast to complete it in competition since its namesake, Elena Produnova, in 1999. Two others have landed it in competition in 2014.