Since the time of Elbridge Gerry, the legendary Massachusetts Governor who attempted to create districts that would preserve a Jeffersonian Democratic-Republican majority in his legislature in perpetuity, the process of drawing electoral districts in the United States has been dominated by political opportunism.

The so-called Gerry-Mander (original 1812 Boston Centinel comic of a Gerry-designed district reproduced above) has stood the test of time, and continues to reflect modern day constituency boundaries. Indeed, today’s Massachusetts District 4 (represented by House Financial Services chair Barney Frank) is quite reminiscent of the old Gerry monster, as derided by the Colbert Report’s ongoing “Better Know a District” segment. 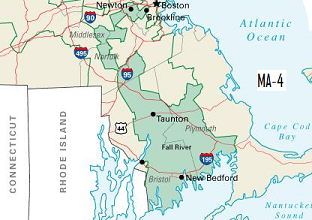 With redistricting dominated by the majority parties of state legislatures after each census, and racial or ethnically defined districts upheld after court challenge as protected by the Voting Rights Act of 1965, Colbert is not alone in mocking the system.

Unfortunately, gerrymandering is not a phenomenon unique to Massachusetts or the U.S., but instead a product of the “first past the post” voting system, which was inherited by the U.S. — among most other British colonies and territories — from the U.K.

Rather than allowing political state legislatures draw the boundaries, the British system uses periodic non-partisan panels that are symbolically chaired by the speaker of the House of Commons. Seperate boundary commissions are used for each of the four constituent U.K. nations/provinces, though overall allocation of seats has Parliamentary guidelines (for example, at least 35 seats in Wales and 16-18 in Northern Ireland regardless of population).

Every ten years or so, the boundary commissions endeavour to update and improve the 650 or so constituencies in the House of Commons, taking account for the changing nature of urban, suburban and rural settlements in Britain.

While non-partisan and oestensibly neutral, the UK boundary commisions are quit handicapped when it comes to designing new districts. National law requires them to consider a long line of factors that have conspired to make the constituency boundaries in the U.K. one of the most skewed in Europe.

1. All four boundary review commissions must use the same census data, and because the commissions to take years to complete their work results in maps that are heavily out of date. For example, the 2005 General election was waged using boundaries that in England were based on population figures from the year 1990. While they will be updated for the upcoming election, this will still only bring them up to speed with the 2000 population estimates.

2. At the same time, election law requires that local government and county boundaries be respected when drawing House of Commons boundaries whenever possible. Of course, counties, towns and cities are of varying sizes, political stripes and ethnic makeup, but tend to concentrate particular communities within MP constituencies rather than cut between them.

3. Some historic and/or prestigious constituencies are informally protected from major changes, while others are protected by law. As a consequence, islands like the Isle of Wight or the Western Isles in Scotland are guaranteed their own seat regardless of population. In the former case this means a constituency with substantially more people (110,000) than the 70,000 person average, and in the latter case far fewer than average.

4. As mentioned above, Wales and Northern Ireland are guaranteed certain minimum number of MPs, 35 and 16 respectively. Scotland was previously guaranteed 72 MPs, until the 1998 Scotland Act reduced the number to 59 in an effort to harmonize the MP to population with England’s.

Some similar problems also exist in the United States. Because population for House districts is only equalized within states and not between them, there is substantial variation in district sizes, tending to favor rural and low-population states. Also, many states have concentrated urban districts (NY-8, 12, 14) or districts encompass particular minority communities (IL-4).

At the same time, the U.S. has often seen substantial shifts in population over the decade the lines are in use. In general, shifts in representation from the historical population centers in the northeast to southern and western states has lagged far behind the movement of people.

In the end, though, the effects tend to cancel one another out. While the first two largely harm the Democrats, the latter makes up for it as the Republican areas and states tend to be the ones seeing the most growth.

In the UK by contrast, the net effect of these aspects of the mapping system is one-sided against the Conservatives. The Conservatives have little presence in Scotland (where they hold 1 out of 59 seats) or Wales, and the result of a commitment to communities of interest is to pack them into fewer seats. Furthermore, population movement is such that they always benefit from redistributions, and therefore suffer disproportionately from the always out-of-date lines. 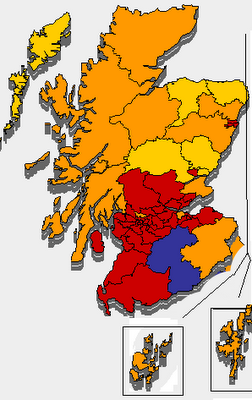 As a result, electoral reform has become a signifcant issue in this year’s House of Commons election, with interests for every party.

For the Liberal Democrats, as we discussed, a more third party friendly system, such the Alternative Vote (ranked voting) or their preferred system of Proportional Representation, would reward their national support. In the case of Labour, the Alternative Vote could also be favorable, as it generously lets Liberal Dem voters cast their second ballots for Gordon Brown’s party.

For the Conservatives, however, the key is a reform of the boundary system in a manner similar to their proposition to the House of Lords in 2009. This would mean introducing a national quota for electorate sizes, synchronizing boundary reviews with the census, and potentially changing the way electorate sizes are calculated from population to eligible voters.

As such, the nature of the boundary commissions and the voting system are rapidly becoming part of the election campaign itself, especially with the media focused on whether the Conservatives will be able to win with what currently looks like a five to six point lead.

If the result is a Conservative popular vote victory but with Labour as the largest party, it is likely that there will be substantial public blame attached to the system of boundary review and first past the post voting. However, much like the disputed 2000 Presidential election in the United States, a single electoral event of this sort is not sufficient to drive major system change. While a referendum on the Alternative Vote is likely to happen in the forseeable future, the issue of boundary commissions will remain ham-strung unless a Conservative-led Parliament passes a major reform bill. Even in this case, it would be several electoral cycles before the changes took hold, leaving the system open for additional changes.

Much like other electoral issues, boundaries and vote counting systems are pulled between the competing poles of societal ideals of democracy, fairness and representation, and the political expediancy of power and the tyranny of the majority. In both the U.S. and the U.K. it is clear that they each have a significant pull on the political outcomes and resulting policies. With an election at hand, though, in the U.K. at least, political expediancy is likely to rule the roost for at least the next few months.
—
This article was co-authored by international affairs columnist Renard Sexton and research assistant Dan Berman. Please send comments or suggestions to sexton538@gmail.com

Additional information on FiveThirtyEight’s coverage of the United Kingdom 2010 General Election can be found here.