A few weeks ago I discussed an AP/GfK poll showing what appears to be a divergence between those who both think they or their family will be victims of a terrorist attack and don’t seem to trust Obama to handle that pending attack, and those who seem less worried about that possibility in the first place yet trust Obama to handle an attack should one occur. 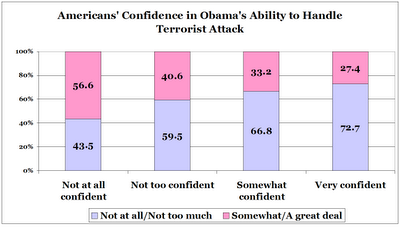 I said at the time I would request from AP/Gfk the crosstabs, and now I have them. (Fivethirtyeight.com thanks Geoff Feinberg, vice president at GfK Roper Public Affairs & Media, for providing them after taking the time to also get consent to release them from the AP.)

The crosstabs are necessary to determine if the polarity in the responses is the byproduct of the fact that those who worry about another attack are also Obama skeptics because, well, they’re conservatives who worry more about such things and preternaturally distrust Obama, as well as vice versa–i.e., that liberals trust Obama and, as conservatives frequently claim, also underestimate the possibility of another attack. In the comments section of that earlier post, we had a long discussion about the degree to which the subjective assessment respondents make of their or their family’s likelihood of being a “victim” of another attack reflects objective likelihoods, but of course the crosstabs provide neither a solution for this disconnect nor can they account for the potentially wide variation in how respondents define the word “victim”–physically injured or killed?, financially affected?–in their heads when responding to such a question.

Anyway, the results are very similar in the crosstabs for the two questions–one, TER1, asking if the respondent thought s/he would be a victim, and a second, TER2, asking if s/he thought “you or your family” would be–against a third terrorism-related question, TER3, that asked, “And when it comes to terrorism, how confident are you that Barack Obama will be able to handle this?” Because the crosstabs for both TER1 and TER2 are very similar against TER3, and beacuse some readers seemed to think the “or your family” version (TER2) was preferable given its more expansive and realistic definition of the likelihood of being affected, in the figure above I report only the crosstabs of TER2 against TER3. For the sake of simplicity and visual clarity, I also collapsed the four possible responses to TER2’s question (“How concerned are you about the chance that you or your family might be a victim of a terrorist attack?”) into two groups, pooling together those who answered “not at all” with “not too much” and those responding “somewhat” and “a great deal”

As you can see from the figure above, and as expected, those more worried about an attack are also more doubtful about Obama’s ability to handle such an attack, and vice versa. But the relationship is not as pronounced as I initially suspected. Clearly, there are significant pockets of people not worried that we’ll be attacked again yet still worried about how Obama will respond. More than two in five people (43.5%) who have no confidence in Obama at all aren’t much worried about an attack anyway, and three in five showing “not too much” confidence in Obama worry little about a pending attack affecting them/family. On the flip side, about 3 in 10 people who are confident in Obama’s abilities–33.2 percent of the “somewhat confident” and 27.4 percent of the “very confident”–also believe they or their family will be hit again.