Oops. Back in August, I said that I thought there was only about a 1 in 3 chance that unemployment would break the 10 percent barrier. I think it was a well-reasoned analysis, but sure did turn out wrong.

The data from the establishment survey — which is completely separate from the household survey by which the unemployment rate is calculated — wasn’t quite as bad. This is the figure that the markets tend to trust more, which is one reason the Dow is slightly up today (although I do think it’s somewhat overvalued and has been for a month or so). Still, even the “good” report had the economy shedding another 190,000 jobs. 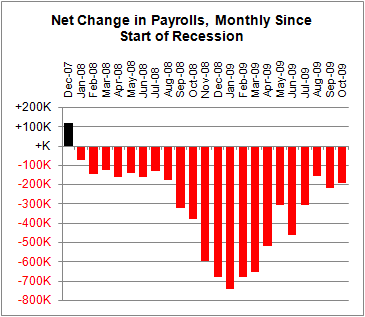 Not that it necessarily means anything, but there’s an odd symmetry to that graph: a period from January through August last year where the payroll deltas were bad, but fairly steady from month to month, and then an inverted peak where things were really awful, and now what looks to be another sort of plateau. January 2008 was the month when the payrolls figure turned negative, and they were at their worst in January 2009 — if things indeed turn out to be symmetric, that would mean that January 2010 is the last month when the economy is still shedding jobs, and February when it starts creating them.

This stuff ought to be much more of a reason for Democrats to worry than whatever happened on Tuesday. Even if the jobs come back a little faster than expected once the employment picture in fact turns the corner, which I think is possible, voters are liable to be looking at an unemployment rate on the order of 9.5 percent as they go to the polls for the midterms.