Every time a new set of statistics on abortion is released, a debate ensues about what the numbers mean and how they should be used. The latest example came in June, when The Associated Press released a survey showing that the U.S. abortion rate declined by about 12 percent from 2010 to 2014. The study sparked a lively conversation along familiar ideological lines about whether the drop resulted from growth in anti-abortion sentiments or increased use of contraception, and even cold, hard numbers couldn’t provide an answer that satisfied both sides.

So why aren’t the numbers enough? Statistics about abortion are murky, and the most helpful numbers tend to be the hardest to get. The AP survey focused on the abortion rate, which is the most widely used and cited stat, but not the only one we have. The Centers for Disease Control and Prevention tracks three abortion measures that are important in understanding nationwide trends: the number (sometimes expressed as a percentage), the rate and the ratio.

The number is self-explanatory: It’s the total number of abortions in a population. The rate — the statistic that’s most frequently discussed — is the number of abortions per 1,000 women ages 15 to 44. But this number has limitations: Because many reproductive-age women aren’t getting pregnant, the rate alone can’t tell you how likely a pregnant woman is to have an abortion. This is where the abortion ratio — the proportion of all pregnancies that end in abortion rather than a birth — comes in.

The most up-to-date and transparent data on abortions we have is from 2011 and shows declines in every measure. 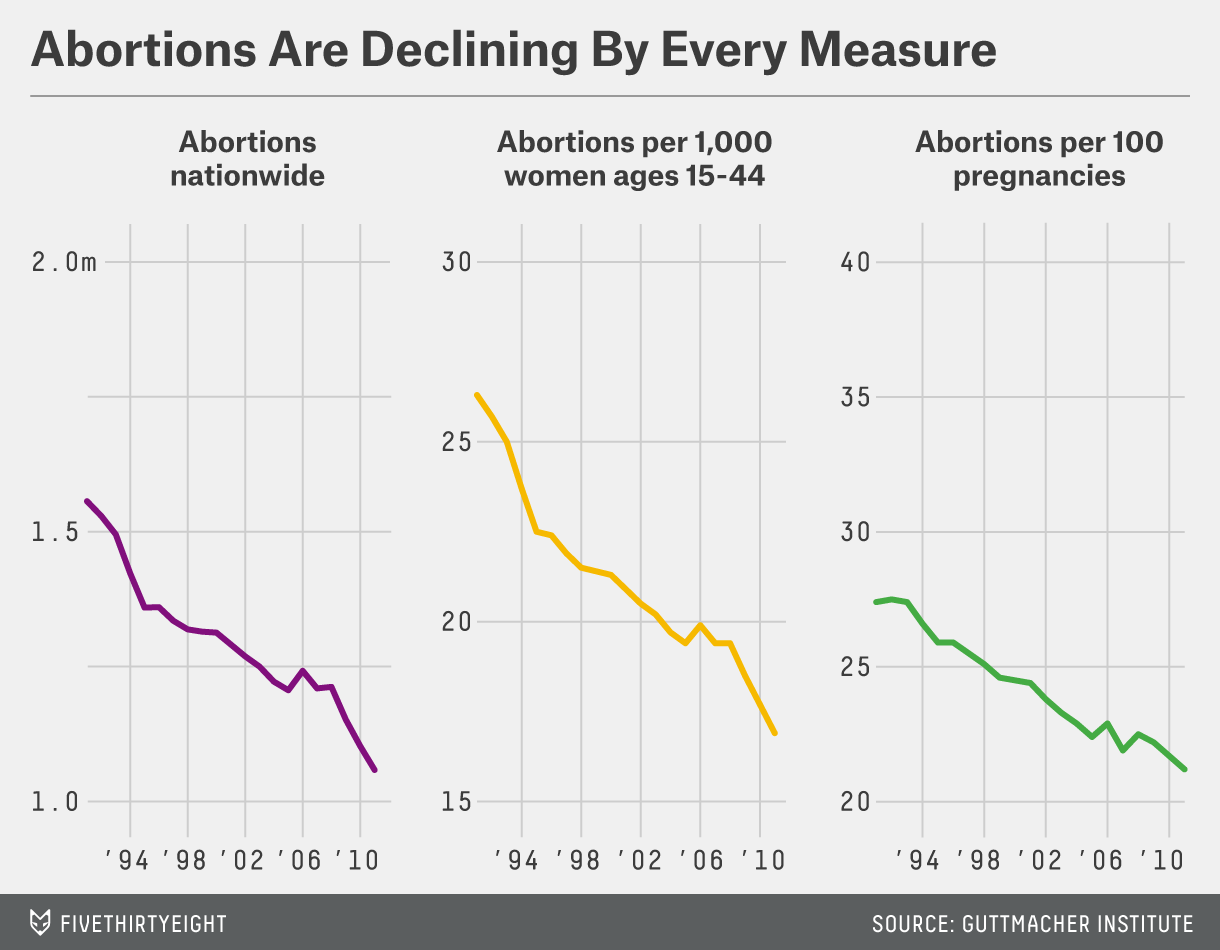 According to the CDC, it’s not necessary to take an in-depth look at all three measures to understand nationwide abortion trends.

“Rates are a good reflection of how common abortion is relative to population size, so that is why they are typically used to describe trends. There are more nuances to interpreting abortion ratios,” CDC spokeswoman Brittany Behm said in an email. “Since numbers, rates and ratios provide very different types of information, it is important to use different measures to answer different questions.”

But the ratio can contribute to a more detailed understanding of abortion trends. Unlike the rate, the ratio helps us understand whether an abortion resulted from an intended or an unintended pregnancy, which gets at why women are choosing to get an abortion or not. Neither the rate nor the ratio alone lends itself to one political ideology or another, but when the data changes, activists differ in their explanation of the causes and implications.

“The abortion ratio is a more sophisticated measure that tells you more about women’s choices,” said Elizabeth Ananat, an associate professor of public policy studies and economics at Duke University. “So if you’re worried about people’s spirituality and change of heart, you’ll be more interested in the ratio than the rate.”

Calculating the abortion rate is more straightforward because it involves less guesswork — part of the abortion ratio is the pregnancy rate, which comes from a variety of sources. But even collecting the data to arrive at the abortion rate is a challenge, said Rachel Jones, principal research scientist at the Guttmacher Institute, a nonprofit organization that supports legal abortion.

The CDC periodically aggregates the number of abortions using data from state health departments. The problem with this strategy, according to Jones, is that data collection is inconsistent from state to state; some states, such as California, gather very little information from providers, and others don’t verify the accuracy of the numbers. Because states have limited resources, the data quality varies widely, making it difficult to create a complete national picture.

Guttmacher performs an abortion “census” every three years or so, a formidable undertaking that involves mailing a survey to each abortion provider in the country. “If they don’t respond, we send the survey out a second time, a third time, and then we start proactively calling them,” she said.

When they’re finished inputting the survey data, Jones and her team vet their numbers against the CDC’s. Guttmacher uses the CDC data to supplement its census — sometimes health department data will fill in gaps from a particular clinic — and as a check on its work, to make sure the clinic surveys are accurate.

Guttmacher’s estimates of the abortion rate are widely cited by advocates on both sides of the issue. So are the CDC’s, though abortion researchers like Ananat prefer to use Guttmacher’s data because it’s more comprehensive.

The question, then, is how to interpret the data — whether to rely on the more straightforward abortion rate, or take the extra steps to calculate the ratio. The abortion ratio lends itself more easily to discussions of causality because it highlights what share of pregnancies end in abortion. If, for example, more women decided not to have abortions — thanks to changing attitudes or restricted access — we would see the abortion ratio fall dramatically as long as the pregnancy rate remained the same.

Together, the abortion ratio and the pregnancy rate can help illustrate two things: first, how many women are getting pregnant at all, and second, when they do get pregnant, whether they decide to have an abortion. If the abortion ratio falls, anti-abortion advocates often contend that women are changing their minds about the morality of the procedure. But that argument is supported only if the pregnancy rate remains stable, showing that births are replacing abortions.

The abortion ratio’s strength is that it puts abortion rates in the context of broader fertility patterns and can shed more light on women’s decision-making. But the reasons behind these choices remain enigmatic, in part because it’s difficult to determine whether a pregnancy is intended. The only way to measure that is to survey women who have recently had an abortion or given birth. The women who have had an abortion are overwhelmingly likely to say the pregnancy was unintended (except for a small number who had one for medical reasons). But the answers from the women who have just given birth are more unreliable, simply because they are less likely to see their baby as “unintended” once it’s born.

All of this means that researchers have to be careful about how they present measures of abortion. “This data is imperfect, particularly because it’s so hard to measure pregnancies or the intendedness of pregnancies,” Ananat said. “And that’s frustrating, because the one thing everyone can agree on is that we want to find answers to these questions.”