In an article in today’s Wall Street Journal, Karl Rove asserts the following:

What about swing voters? There are probably more undecided and persuadable voters open to switching their choice than in any election since 1968.

Is it true that there are an unusually high number of swing voters this year? Not really, although it may be slightly higher than average. Let’s go to the video tape … err… the Gallup Polling archive.

What I’ve done here is simply to take the number of unaccounted-for voters in the Gallup survey closest to October 1st of the election year in question. By “unaccounted for” (or “unaccounted”) I mean voters that Gallup had not assigned to any particular candidate. This will include your true uncommitteds, as well as refusals and don’t-knows, and voters committed to minor party candidates that Gallup did not mention by name. 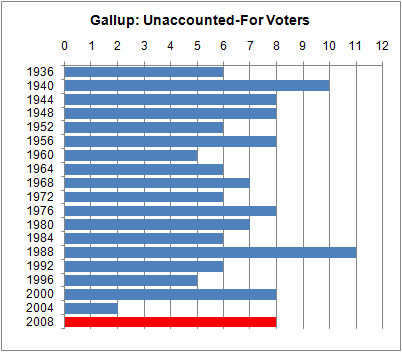 The number of persuadable voters — and this is a broader universe, since it includes not only uncommitted voters, but also those who are nominally committed but who could potentially change their minds — is a little tougher to get a handle on. But the Pew Research Center has some useful data. Since 1992, they have included in their standard battery a question asking whether voters had decided against one or another of the major party candidates. For instance, as of Pew’s most recent survey from late last month, 42 percent of voters said they had decided against Senator McCain, and 37 percent said they’d decided against Senator Obama. This leaves 21 percent of voters who are theoretically open to either major party candidate. We can compare these to the Pew numbers released in Early October 1992, Late September 1996, Early October 2000, and Early October 2004. 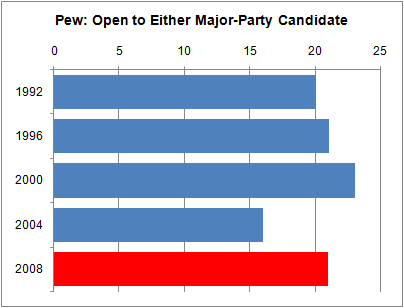 This year’s numbers are right in line with past elections, again with the mild exception of 2004, when an unusually high fraction of the electorate had ruled out either George Bush or John Kerry. And remember, more voters have decided against McCain than Obama. The candidates to exceed the 42 percent of voters who have thus far said “no how, no way, no McCain” were George Bush, Sr. in 1992 (46 percent), Bob Dole in 1996 (44 percent), and John Kerry in 2004 (45 percent), all of whom lost their elections.