Three years after President Obama signed the health care reform law, there are concerns that the process of implementing it will be rocky. Even some of the law’s supporters are worried.

Perhaps more troubling for the White House, the Affordable Care Act is still not well liked or well understood. The Obama administration had hoped that over time, the legislation would gain enough support to help smooth over the rough patches of putting it into practice. Instead, public opinion has remained mostly static: a plurality of Americans still disapprove of the law, and a substantial portion of the public remains uncertain about what it says, according to recent polls.

There is even confusion about whether the health care law is still, in fact, law. A Kaiser Family Foundation survey [PDF] conducted in April found that 41 percent of American adults did not know that the Affordable Care Act remains the law of the land. A separate tracking survey conducted by Kaiser, which has done far more surveys on health care than any other polling organization, found that roughly half of American adults said they did not have enough information about the law to understand how it will affect them.

The tracking poll found that there had actually been an increase in the percentage of American adults with no opinion about the health care law. 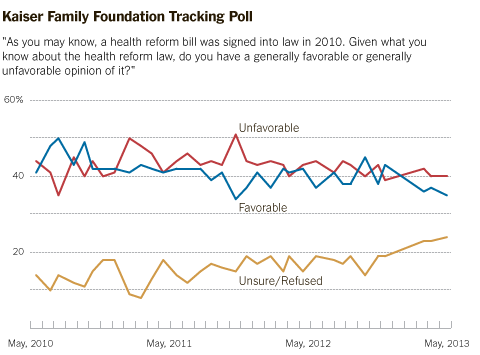 Among those who do have an opinion, more people still regard the health care law negatively than positively, according to a series of recent polls. In fact, the law’s net approval numbers stand basically where they did when it was passed.

One reason the Obama administration might still be optimistic is that while surveys have consistently found that a plurality of Americans have an overall negative view of the Affordable Care Act, they have just as consistently shown that large majorities of Americans favor individual elements of the law.

Once those benefits become realities, the percentage of Americans who approve of the law may rise. But if the law’s rollout is messy, there may be a dip in approval before it has a chance to become more popular.