I’ll be a guest tomorrow on KCRW‘s (NPR’s Los Angeles affiliate) To the Point, at about 1:10 PM Central Time.

Sports, not politics, but my annual piece on the top 50 players in baseball is up at SportsIllustrated.com. Dustin Pedroia is #40.

And look for 538-related material soon at New York Magazine and on bloggingheads.tv. (EDIT: Here is that nymag.com piece, the thrust of which is 538: The Cliff’s Notes Version.)

An actual, value-added thought follows below the jump.

It’s probably just a matter of the punditry all being bored and thinking out loud at once, but when you start to see stuff like this… 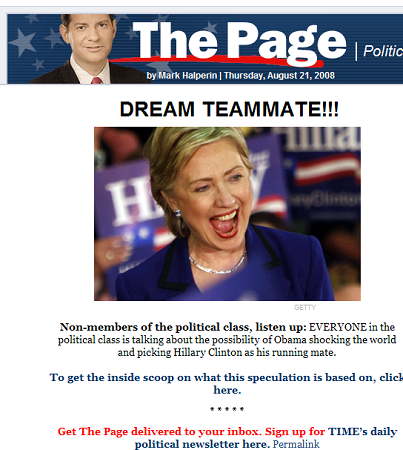 …is there not a little bit of danger to the Obama campaign? If I were a high-information Hillary loyalist, I’d be getting my hopes up right about now.

With that being the case, would it not be in the interest of the Obama campaign be moving to quash the “it could still be Hillary!” rumors — assuming she is not the pick? And since the rumors haven’t been quashed, does this therefore indicate that she might be the pick?