In conjunction with Renard Sexton and Daniel Berman, I have made several further improvements to our UK General Election forecasting model. However, it still bodes quite bad news for the Labour party; we now show them holding on to only about 200 seats in the House of Commons, versus roughly 300 for the Conseratives and 120 for the Liberal Democrats. 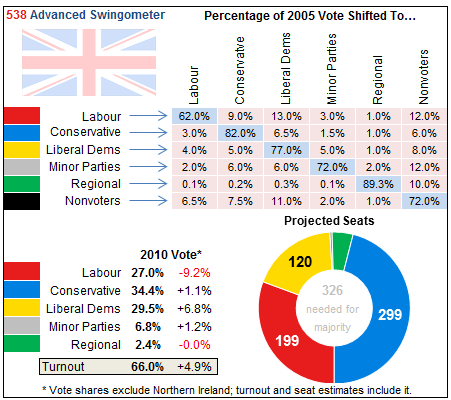 As before, the basic premise of the model is to explicitly shift votes from one party to another — for instance, take a percentage of Labour’s votes and give them to Liberal Democrats — and then apply these vote shifts in a sophisticated way across the UK’s 650 constituencies.

The vote estimates included herein are not based on any hard-and-fast rules; rather, they are educated guesses based on an examination of cross-tabular results in recent several UK polls, with the stipulation that the overall vote share estimates must correspond to a rough average of recent polls. Rather, the “value-add” of the model is in the way that it takes these vote share estimates and translates them into estimates in the number of seats that will be controlled by each party.

Several improvements have been made to the model since the original version that we posted on Sunday:

— It now allows voters to move into and out of the electorate, rather than simply from one party to another.
— It now has a more advanced process for assigning votes across individual constituencies, producing effects that to some degree resemble “tactical voting”.
— It now refines its results based on regional-level polling data — this is particularly important for Scotland.
— It now accounts for incumbent retirements.
— It now accounts for Scottish and Welsh regional/nationalist parties, in addition to those from Northern Ireland.

These will be described in more detail in subsequent posts.

Although we are proud of this product and believe that it will more likely than not it will me more accurate than simple uniform swing calculations (which show substantially more optimistic seat estimates for Labour), it is experimental and should be regarded as such.