The most important thing to know is that U.S. presidential elections are a lot more volatile than U.K. parliamentary elections. I collected data on the error rate of each individual U.K. national parliamentary poll and national U.S. presidential poll within a year of every election since 1979.1 For example, let’s say a U.K. survey showed the Conservatives with an 11 percentage point lead over Labour, but the Conservatives win by only 6 points. That poll has a 5 percentage point error.2 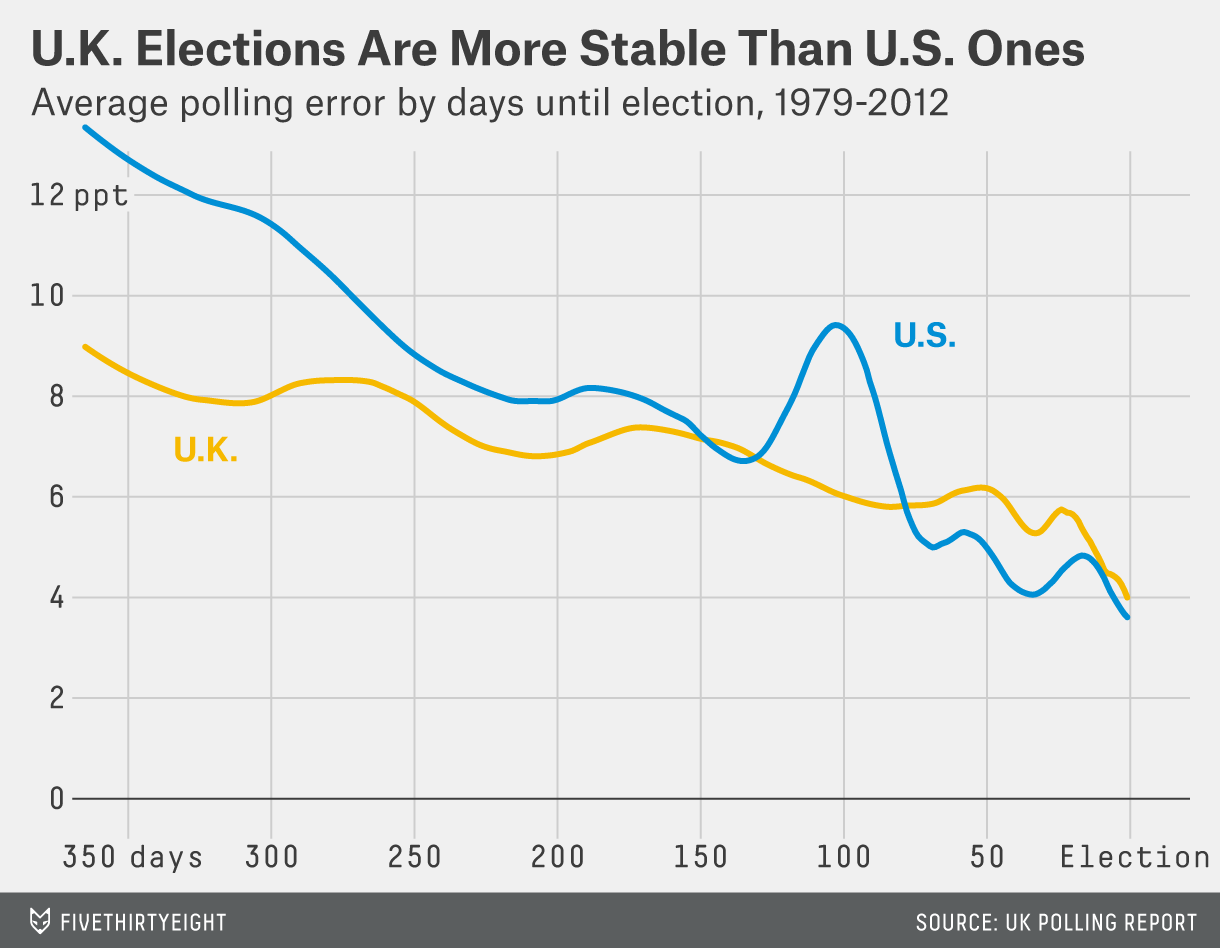 A year out from an American presidential election, we basically have no idea who is going to win. The error rate in the U.S. drops rapidly, though — from 13 percentage points 365 days out to about 7 points with 150 days left in the campaign. During that same period, the U.K. error rate drops from 9 percentage points to 7. Why are the U.K. election polls initially more accurate?

Presidential polls in the U.S. more often ask about the individual candidates than the parties. So U.S. polls early on are really tied to name recognition and less so to fundamental factors that affect election outcomes (such as the economy). Polls in the U.S. tend to converge with the fundamentals as the election approaches. But early on, the polls are especially unstable for candidates who suffer from a lack of name recognition. Both Michael Dukakis and Bill Clinton were down by over 30 percentage points to the much-better-known George H.W. Bush a year out from the 1988 and 1992 presidential elections, respectively.

Polls in the U.K., on the other hand, ask mostly about parties, not candidates. If there were a large difference between how voters ended up feeling about the candidates versus the parties, polls asking only about parties could be wildly inaccurate. In reality, election day preferences for parties and individual candidates don’t differ by much.

While it’s difficult to measure the impact of candidate quality directly, extrapolating the national vote down to the district — known as uniform swing — works fairly well. Also, incumbency has very little advantage in the U.K. It’s only worth a percentage point or two for the Conservative and Labour parties, while it’s still worth around 5 percentage points in U.S. House elections, even in these super-polarizing times.

It’s only after the primaries take place that U.S. polls catch up to the U.K. ones in terms of accuracy. Why? Let’s go back to the Clinton and Dukakis examples. Clinton and Dukakis became better known as the primary campaigns unfolded, and by 150 days out (or the beginning of June in the election year), they were on basically equal footing with Bush in terms of name recognition.

But just as U.S. polls become as accurate as the U.K. ones, U.S. surveys become a lot less accurate around day 100. What the heck is going on?

The U.S. party conventions occur in this period. The greatest volatility in presidential campaigns occurs around the conventions, and U.K. politics simply has no real equivalent. Anyone remember when Dukakis took a large lead over Bush after the Democratic National Convention in 1988, about 100 days before the election? The bounce didn’t last long, but for a moment, Dukakis was up by nearly 20 percentage points.

After the conventions, U.S. election polls tend to be slightly more accurate than their U.K. counterparts. Both, however, suffer from a small spike in average pollster error just within 30 days of the election. Typically, that’s when the short campaign starts in the U.K. and when the U.S. candidate debates take place. As we saw in 2010 and 2012, with strong debate performances by Nick Clegg in the U.K. and Mitt Romney in the U.S., respectively, debates can lead to polling shifts that don’t last.

Observers, though, should always be on the lookout for elections in which the polls miss by a lot in either direction. For example, in 1992 in the U.K. and in 1980 in the U.S., the final polls were off by more than 6 percentage points because the conservative candidates were underestimated.

You never know where a shy Tory may be lurking.