As we approach the closing weeks of the UK campaign, it has become increasingly clear that the campaign will be hard fought to the bitter end.

Labour party insiders told me that while “even six months ago most in the party felt that there was no question that this would be a bad loss,” there is new energy in the Labour campaign among the party faithful. At the same time, there remains the powerful refrain from swing voters that change is badly needed. A 30-something Conservative party campaigner explained that, “though [she] voted for Tony Blair in 1997 and 2001, it could not be clearer” that Labour must be “swept out”.

I spent five days in London talking numbers and personalities with several of the main UK pollsters last week, finding a great deal of agreement on overall trends of the race, but substantial differences of opinion on the likely outcome. 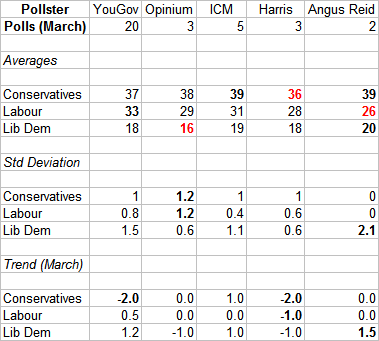 The generally accepted state of the race is largely dictated by YouGov’s internet polling operation, which through its high quantity of polling (commissioned mainly by the The Sun and the Sunday Times) tends to dominate the various “uniform national swing” calculators out there.

As such, the 2 point reduction in Tory support during March that YouGov polling found has been echoed widely in the media. At the same time, newcomers Angus Reid (a Canadian firm) have suggested that things are much worse for Labour than many suspect, and they project a far better performance from the Liberal Democrats and smaller parties like the BNP, UKIP and the regional/nationalist parties.

Of course, these national horserace numbers only tell us so much about the state of the race. Here are three factors (among several) have not yet been accounted for:

1. UK pollsters deal with undecided voters quite differently than US polling outfits: Some pollsters exclude undecided or refused voters entirely, while others count them based on their previous voting affiliation at a discounted rate (often 50%). Because the race is so close, how undecided voters break will be a key factor, making projections quite difficult.

2. UK pollsters account for voter likelihood mainly through self-rating of intention and previous voting history: Most pollsters ask respondants to rank their chance of voting from 1-10, and then exclude those respondants who do not reach a particular threshold. Some only take 10s, other 8-10, and so forth. Some also ask whether the respondant voted in the last election. In some cases this has the effect of a quite strong enthusiasm screen, as we have discussed on 538 several times before.

3. Swing voters could (and likely do) behave differently: Marginal seats will of course play the kingmakers this time around. Within them, a relatively small number of swing voters will make the difference one way or the other. March polling from Ipsos published in the Telegraph declared that “in 56 Labour-held seats that the Tories need a swing of between 5% and 9% to win… Labour leads the Tories by four points among those certain to vote.”

However, of the 1007 respondants, 440 were screened out as not definite to vote (only 10 out of 10 voter intention was kept), leaving 567 voters. Voting sub-group weights then screened out an additional 34 people, mainly to account for an under-representation of the 18-34 group, and over-representation of the 55-64 and 65+ groups. An additional 40 undecided voters (8 percent), and 12 “refused” voters (2 percent) were excluded from the final 479 respondants upon which the 4 point lead was based.

On top of this, 30 percent of respondants certain to vote said that they may change their vote before the election, along with 50 percent of all respondants.

(A small aside: if the marginal seats included in this study range from L+5 to L+9, with a back of the envelope average of L+7, they have just a L+4 lead overall, this could be used to suggest an overall Conservative swing in LAB-CON marginals of +3, which would flip 40 seats.)

Based on these factors, we here at 538 hope to build a slightly improved mousetrap over the next couple weeks in order to project marginal and safe seats with at least one level of further precision.

At the same time, there will be narrative coverage of several interesting marginal seats, and qualititative comparison of the campaign culture, numbers game and political system in the UK with other systems our audience is familiar with.
—
Renard Sexton is FiveThirtyEight’s international affairs columnist and is based in Geneva, Switzerland. He can be contacted at sexton538@gmail.com

Additional information on FiveThirtyEight’s coverage of the United Kingdom 2010 General Election can be found here.