With the general election just several days away, it is time to usher in the endgames analysis. In politics, a lot can change in just a few days, but at the same time, no one can change the fundamentals. If you have been behind at the 1 year mark, losing at the 6 month mark, and still about the same distance back a week before the election, the writing is on the wall.

Nonetheless, though we are pretty certain the Conservatives will prevail in the national popular vote, Labour and the Lib Dems are fully in contention for second place. However, given the advantages that the UK electoral system gives to the “incumbent” top two parties, Labour will far outstrip the Liberal Democrats in their MP haul. Indeed, with the Lib Dems ahead by a point, the FiveThirtyEight projection model still has Labour nearly doubling the Lib Dems seat totals. 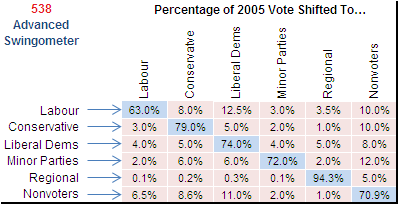 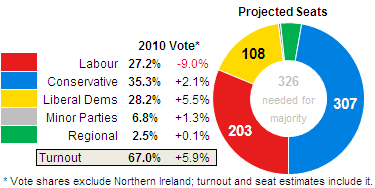 The following three scenarios are ranked by their relative likelihood overall.*

If the current situation stands, the Conservatives will earn a minority win — the hung parliament scenario that has been bounced around as a possible outcome for some time.

However, from this point, things could slightly deteriorate for the Tories with them still pulling an MP plurality (assuming no Labour-LD coalition). 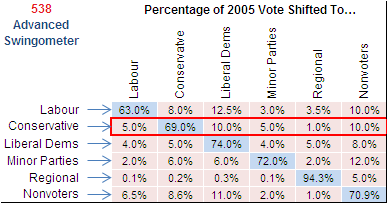 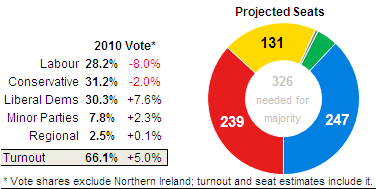 In this scenario, we posit that Tory support drops 4 points from it’s current position from a combination of high defection to minor parties like UKIP and the BNP (5 percent), 10 percent pulled away by the Lib Dems, and 10 percent of the Tories 2005 voters simply not voting. Nonetheless, they still walk away with a 8 seats plurality over Labour, though in a severely weakened position.

On the other end of things, let us examine what might happen if Labour are not able to sufficiently rally in the closing week — instead losing big. A year ago, when the Tories were seeing polling leads over Labour of 15-20 points, a Conservative majority seemed a foregone conclusion. Of course, the race has tightened substantially, especially with the addition of a powerful Lib Dem showing. 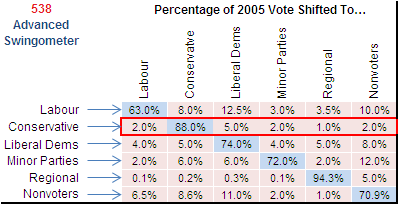 If David Cameron can hold his defections to Labour and minor parties to an absolute minimum, turn out his base voters from 2005 (losing few to stay-home crowd), as well as keeping losses to the Lib Dems to the expected 5 percent, a bare majority is in store.

At the same time, let’s assume that Labour pull just 23 percent– the lowest figure they fell to in recent polling (courtesy of Angus Reid, though Harris had them on 24 during the same period) — while keeping the rest equal. 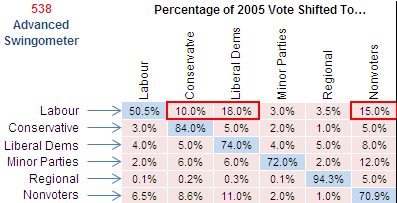 In the case that the majority of the lost Labour voters who still cast a ballot move to the Lib Dems, the Tories will see a substantial, but not enormous 12-seat majority (though nearly 200 seats above the next largest party.

However, if they were split evenly between the two, we would see a quite imposing Tory majority. 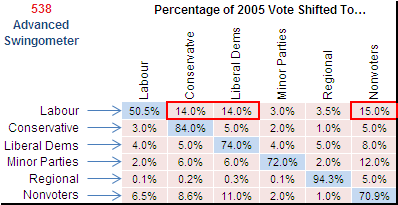 A long shot at this point, a Labour “win” is still possible. If we were to see Tory weakness along the lines we described in Scenario 1 (losses to minor parties, Lib Dems and non-voters), while Labour held the line against the Liberal Democrats — holding their losses to 10 percent of their 2005 voters — a Frankenstein win could be pulled off. 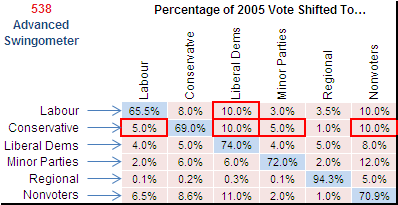 Until these conditions — relatively unlikely but still quite possible conditions, mind you — Labour could pull off a 13 seat plurality of seats, while sneaking in third place in the national popular vote.

Of course, these are just several of perhaps 15 or 20 endgame scenarios for the last week of this very exciting election campaign. We’ll introduce a few more in the coming days, as well as presented an updated projection with our prediction as to which one it will be.

On Wednesday evening, a final prediction will go up, and on Thursday the FiveThirtyEight team (Nate Silver, Dan Berman, Tom Dollar and myself) will keep you up to date with liveblog entries.

*As a side note and point of interest: in 2005 the polling average of the British Polling Council members almost unanimously overshot Labour’s share — by an average of 1.4 points; while they were closer but still tended a point low on the Conservatives. While they have undoubtedly adjusted their methods to account for this, there may be some level of “shy tory” responses or industry-wide house effect left in the pipes.