Although we have our “final” projection out for today’s election in the United Kingdom, the polls on the other side of the pond have not always been so great, so it is necessary to build in some tolerance for error.

In fact, the polls have often been pretty bad. They were fully 6.4 points too low on projecting the Conservatives’ vote in 1992, and 4.7 points too high on Labour. They were also too high on Labour in 1997, although the error was somewhat masked because uniform swing calculations, which underestimated the number of seats they’d gain given the vote they actually had, pushed in the other direction. Things have been better in the last two elections, but not perfect. Missing the Labour-Conservative margin by 4.2 points, as the polls did in 2001, or even 2.5 points, as they did in 2005, would be considered a middling performance for a high-turnout general election here in the United States.

What if the average bias observed in the polls over the past four elections — 2.9 points too high on Labour, 2.8 points too low on Conservatives, and also slightly low on Liberal Democrats (but too high on ‘other’) were replicated today? In that case, Conservatives would finish with 38.3 percent of the vote, LibDems 28.2, and Labour 24.5, which according to our model would produce a fairly impressive Conservative majority as follows: 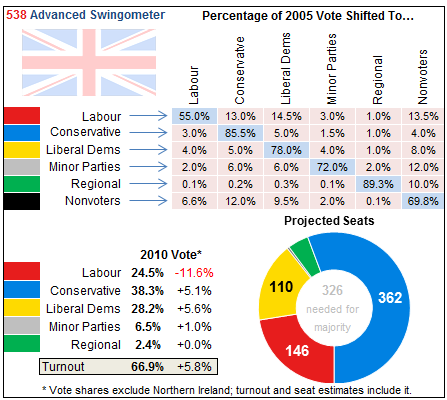 But, of course, the error could run in a lot of different directions. Maybe the pollsters — aware that they’ve overestimated Labour’s vote in the past — will go too far in the other direction and underestimate it instead. Maybe they’re shortchanging the number of new voters who will turn out for Liberal Democrats, even if their momentum has flagged some in recent days.

Let’s quickly run through what would happen if the pollsters were 4 points too high, or 4 points too low, for each of the three major parties. As a reminder, here is our benchmark: a forecast of Conservatives 312, Labour 204, LibDems 103, assuming that the polls (and our modelling assumptions!) are perfect. 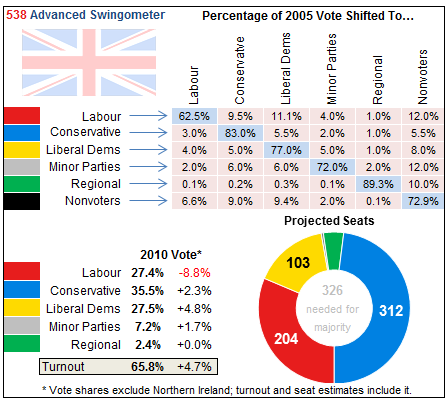 If Labour were to do 4 points better than the baseline forecast — with their gains coming about equally from the other two parties — they could still finish with a plurality of seats (a majority looks difficult to achieve even under somewhat best-case assumptions):

If the polls are 4 points too high on Labour, on the other hand, they could still have a devastating election: 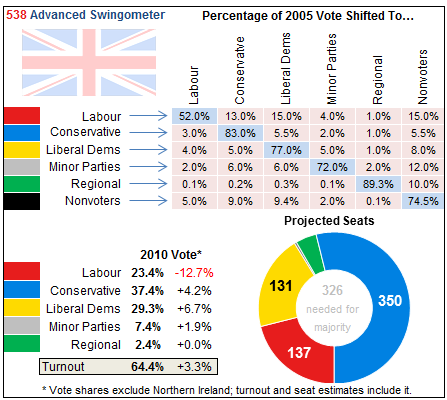 If Conservatives outperform their polls by 4 points, they could wind up with a very large majority that is simultaneously embarrassing to Labour and disappointing to LibDems: 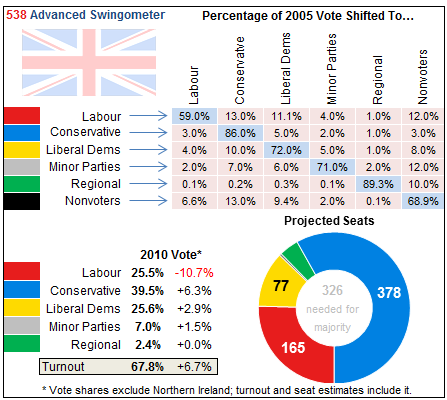 If they’re 4 points high on Conservatives, though, we could have this messy scenario in which no one (save perhaps the LibDems) emerges with momentum or mandate: 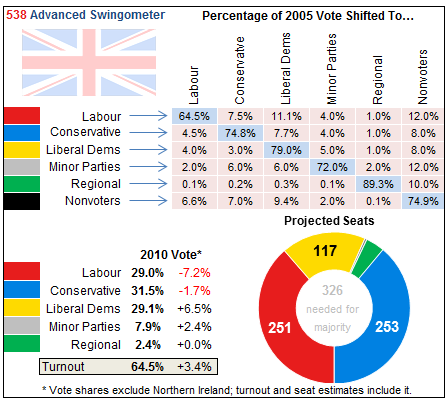 The LibDems, having lost about 2 points from their peak in the polling, are probably now in a position where even a 4-point error in their favor might still leave them as but the third largest party: 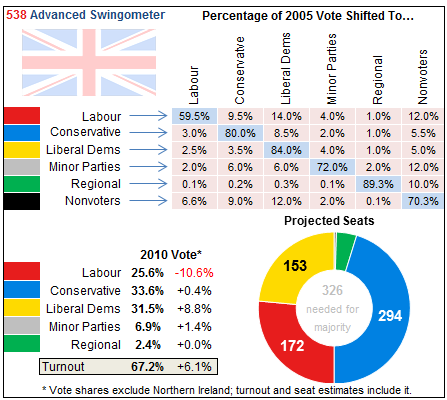 With a 4-point swing against the LibDems, we actually have them losing two seats against the 62 they have now: 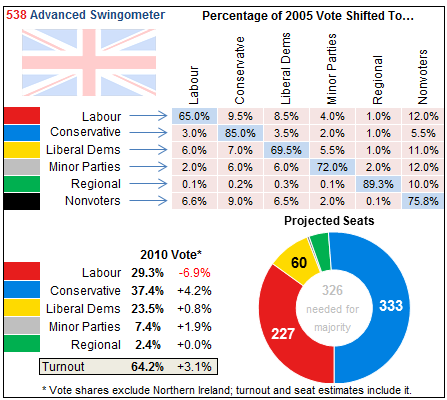 My intuition is that most of the risks are still to the downside on Labour’s vote, given the history of overestimating their vote in the past and that some pollsters are distributing undecideds based on how people claimed to have voted in the last election — something which tends to help Labour because their voters seem the most indifferent about this election. On the other hand, our model is more aggressive than most others in taking away seats from Labour for a given vote share.

As of this writing, betting markets now give Conservatives about a 38 percent chance of claiming a majority. I don’t know that there’s much arbitrage either way there, but I’d be slightly inclined to take the Tories on those odds.