The recent debate between Uber and New York City Mayor Bill de Blasio over whether the ride-for-hire company was exacerbating Manhattan congestion was fueled by incomplete, misleading data. There was no way of knowing exactly where Uber cars and taxis pick up passengers, and so the city agreed to a study of Uber’s effects last month as part of its detente with the company.

Now, thanks in part to a Freedom of Information Law request, we have data. A lot of data: nearly 93 million trips taken by Uber and conventional taxis over a six-month period from April to September last year, including date, time and coordinates of the pickups. And while we can’t yet say whether Uber has exacerbated Manhattan congestion, the data we’ve analyzed shows that Uber has a point when it claims that it is doing a better job than taxis in serving the boroughs of New York City outside of Manhattan. Of the 4.4 million Uber rides for which the data shows a pickup location, 22 percent started outside of Manhattan, compared with just 14 percent of the 88.4 million yellow and green taxi rides.1 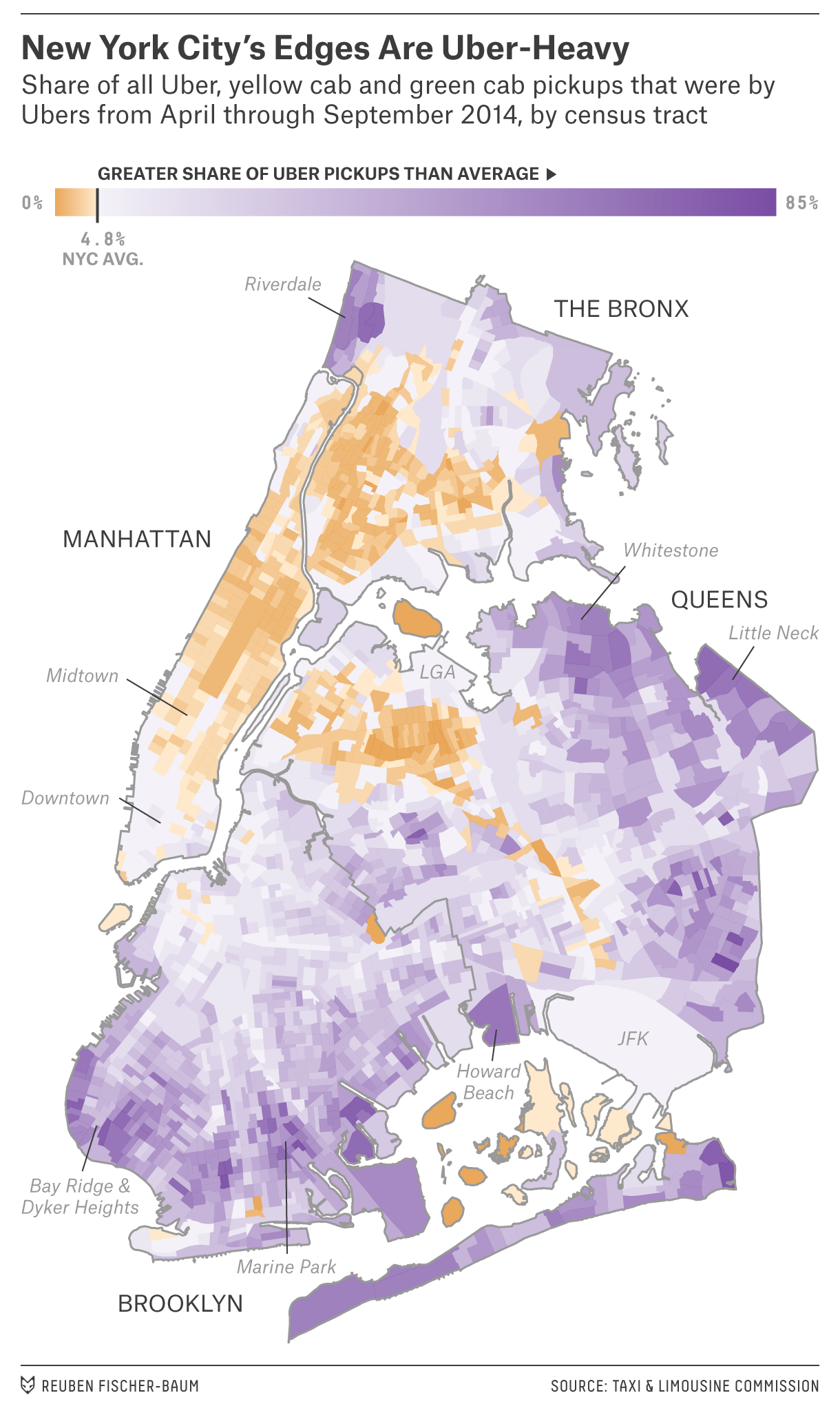 The city, though, has a point when it says that most of Uber’s trips are in the city’s busiest areas. Uber’s Manhattan pickups were heavily concentrated in the part of the island south of 59th Street, just as taxi pickups are. In fact, 63 percent of all Uber rides in New York started in that area,2 which includes the midtown and downtown business districts, compared with 62 percent of all taxi pickups.3 (Taxis picked up a greater proportion of their riders in Manhattan north of 59th Street: 25 percent, compared with Uber’s 15 percent.) 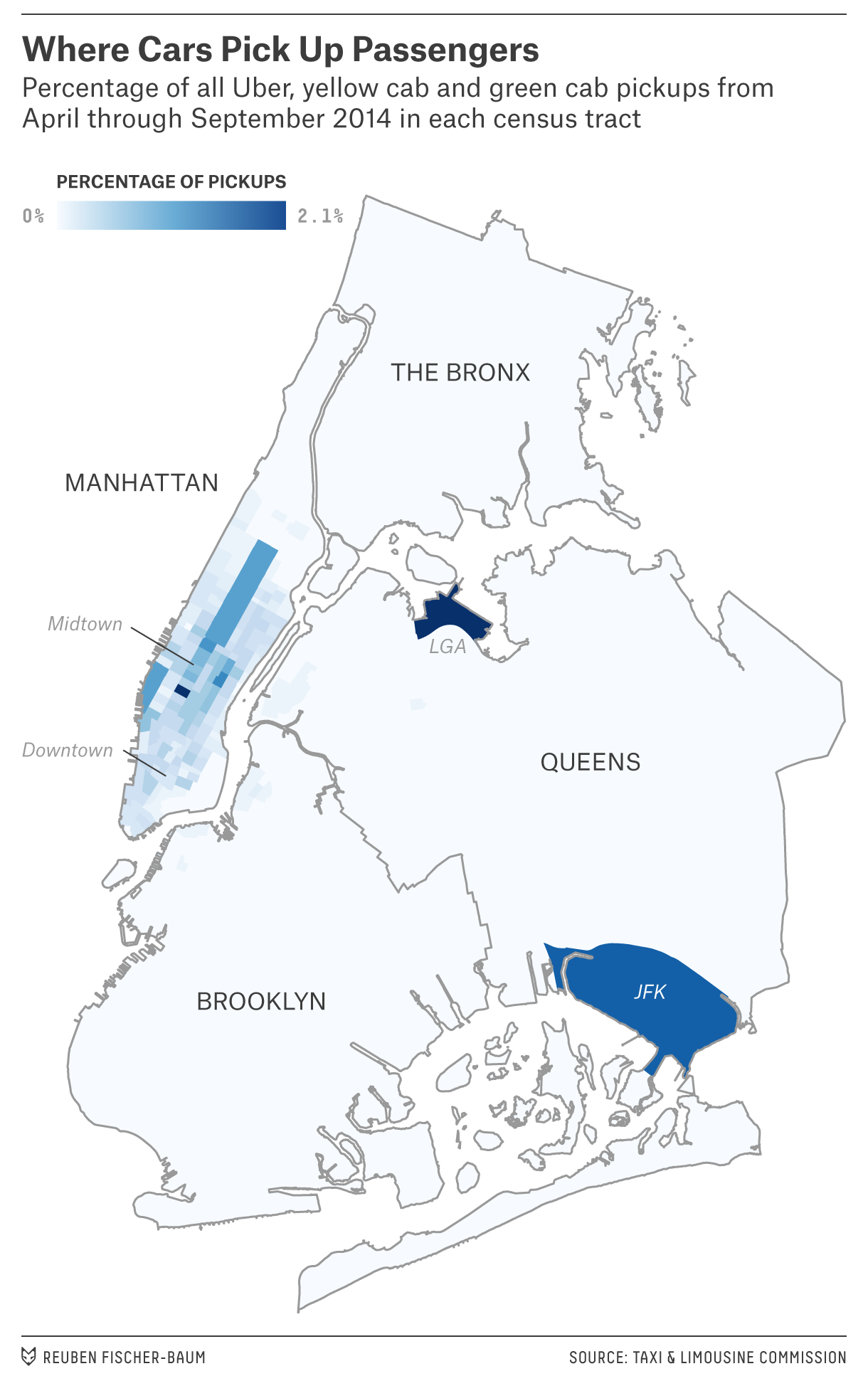 The data shows just how much of the market for rides is concentrated in Manhattan south of 59th Street, home to less than 10 percent of the city’s inhabitants but the destination of most interborough commutes. It is also, though, the part of the city best-served by the subway and with the worst traffic congestion.

“This tracks very closely with the patterns we’ve seen in this sector — with the overwhelming majority of pickups concentrated in Manhattan,” Wiley Norvell, de Blasio’s deputy press secretary, said in an emailed statement about Uber. The city’s forthcoming study, he said, should add more information on congestion, air quality and other factors.

Norvell added that the city is aware of the need for more service outside the city center. “There is a long-recognized inequity in service to the outer boroughs, which is why green cabs that service solely the outer boroughs and Upper Manhattan were launched and why the administration has supported their growth,” he said.

We got the Uber data two weeks ago after making the Freedom of Information Law request to New York’s Taxi & Limousine Commission. (The TLC separately published the cab data online last week.)4 We then divvied up the 93 million rides by census tract, borough, day of week and time of day.

While Uber had a greater percentage of pickups outside of Manhattan than taxis did, there was plenty of variation in Uber’s share among neighborhoods in the outer boroughs. For instance, Uber was particularly strong in the wealthy northwestern Bronx neighborhood of Riverdale and in the northeastern Queens neighborhoods of Little Neck and College Point, while taxis were dominant in northwestern Queens, closer to Manhattan. More broadly, many of Uber’s strongholds were far from subways or a long transit trip away from Midtown, areas like Dyker Heights and Marine Park in southern Brooklyn.

Uber grew quickly during the six months for which we have data. Its drivers provided 82 percent more rides in September than in April. We checked how its market share among all Uber and taxi rides5 changed throughout the five boroughs by subtracting its April share from its September share. And what we found indicates that Uber was increasing in strength outside of Manhattan: Its biggest market-share increases came elsewhere, notably in northeastern Queens and southwestern Brooklyn, two of the areas the farthest from Midtown.

We don’t have detailed trip data since last September, and the breakdown of rides could have changed since then. For instance, Uber offered an incentive from October through December of last year for drivers to work in the busiest areas of the city — Manhattan south of 110th Street and a sliver of Brooklyn from Greenpoint to Park Slope — which could have decreased its proportion of rides that started outside of Manhattan. On the other hand, Uber spokeswoman Alix Anfang pointed out incentives since April of this year for drivers to work in the outer boroughs.

“This was a short-term incentive to meet high demand during the holiday season and has not been in effect any time this year,” Anfang said of last fall’s incentive. “During the short time it was in place, reliable rides were still readily available in the outer boroughs.”

Anfang also said our data might understate Uber’s current outer-borough footprint because about 10 percent of the rides in green taxis, which can be hired by phone or app, have come through Uber. In addition, she said a greater share of dropoffs than pickups were outside Manhattan (we did not receive dropoff data from the TLC).

“Uber is proud that the communities outside of Manhattan, which yellow taxis go to the least, are our fastest-growing areas,” she said. “As of July 2015, one-third of all Uber rides started in the outer boroughs and Upper Manhattan — a trend that has been increasing since we first came to NYC.” According to data provided by Uber, 69 percent of its rides in the six months through July of this year started inside the Manhattan core — south of 110th Street on the West Side and 96th Street on the East Side. That’s down from 76 percent during the six months of 2014 in our data set.

We broke down rides by time as well as place. Uber is busiest between 5 and 6 p.m., while taxi rides dip around that time because of late-afternoon shift changes. Uber does the least business on Sundays, while green cab rides peak during the weekend. 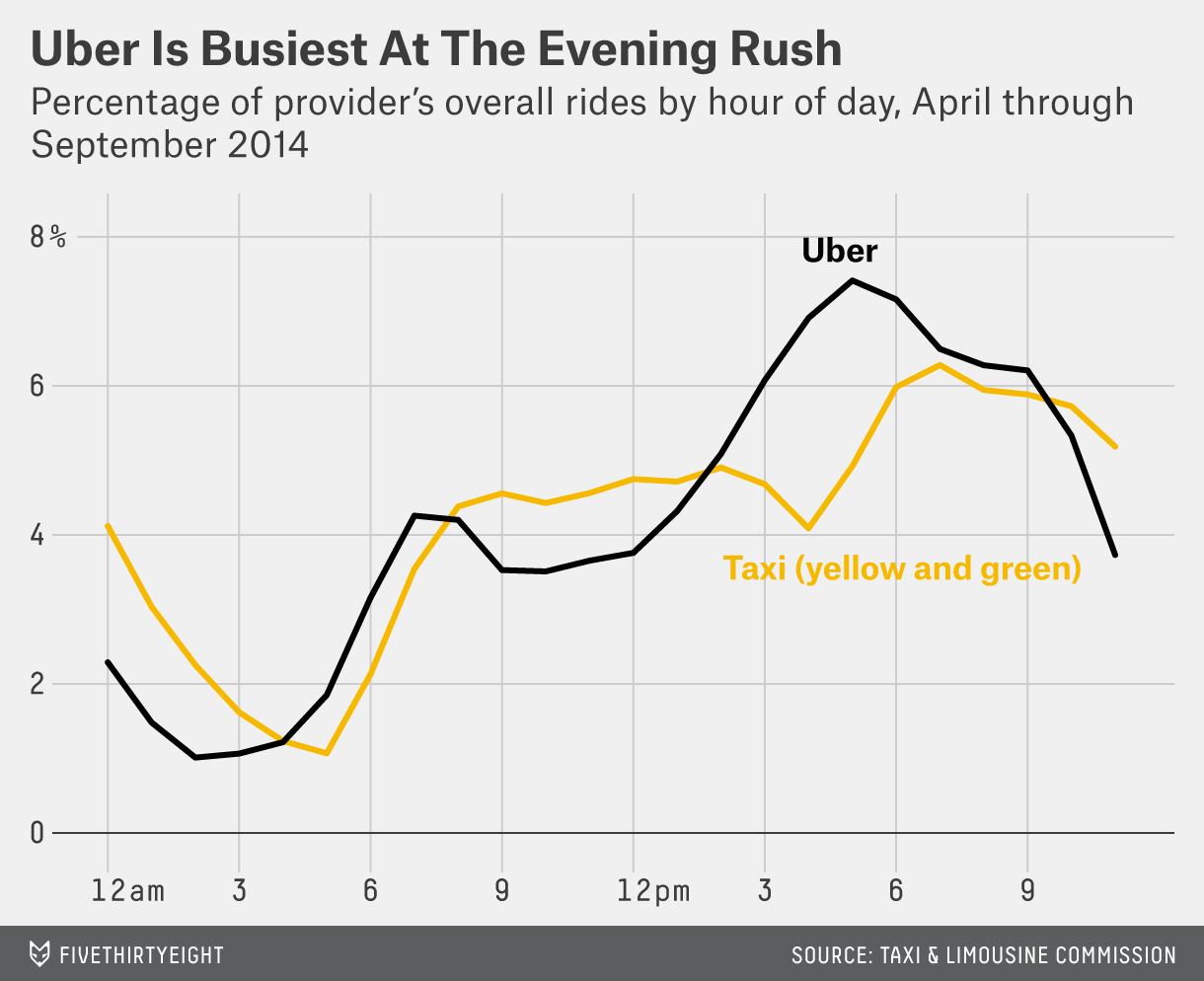 Even data on nearly 93 million rides isn’t enough to answer all the interesting questions about getting around New York City by for-hire car. But we’ll be exploring this data in greater depth in forthcoming articles — looking at whether Uber serves predominantly black neighborhoods or low-income neighborhoods better than cabs do, for instance.