The definitions of the terms “liberal” and “conservative” have been the subjects of much debate in contemporary American politics. But it has become increasingly clear that the term “progressive” is equally ambiguous, and is associated with at least two relatively distinct philosophical traditions. Although these two “progressivisms” share common ground on many (probably most) issues, they are at loggerheads on some others, as has perhaps become more apparent since the election of President Obama. 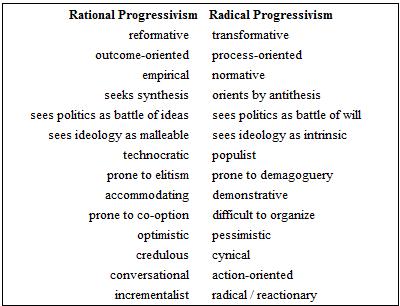 The first type of progressivism has its philosophical underpinnings in 18th Century, Enlightement-era thought. It believes that politics is a battle of ideas. It further believes that through the use of reason and the exchange of ideas, human society will tend to improve itself through scientific and technological innovation. Hence, it believes in progress, and for this reason lays claim to the term “progressive”. Because of its belief and optimism in the faculties of human reason, I refer to this philosophy as rational progressivism.

Rational progressivism tends to be trusting, within reason, of status quo political and economic institutions — generally including the institution of capitalism. It tends to trust these institutions because it believes they are a manifestation of progress made by previous generations. However, unlike conservatism, it also sees these institutions as continuing works in progress, subject to inefficiencies because of distorted or poorly-designed incentives, poorly-informed or misinformed participants, and competition from ‘irrational’ worldviews like religion. It also recognizes that certain persons who stand to benefit from preserving the status quo, particularly elected officials but also corporations, may seek to block this progress to protect their own interests. The project of rational progressivism, then, is to propagate good ideas and to convert them, through a wide and aggressive array of democratic means, into public policy.

The second type of progressivism is what I call radical progressivism. It represents, indeed, a much more radical and comprehensive critique of the status quo, which it tends to see as intrinsically corrupt. Its philosophical tradition originates in 19th Century thought — and specifically, owes a great deal to the Marxist critique of capitalism and the Marxist theory of social change. It also finds inspiration in both the radical movement of the 1960s and the labor and social movements of late 19th and early 20th centuries (from which it borrows the label “progressive”).

Radical progressivism is more clearly distinguishable from “conventional” liberalism and would generally be associated with the “far left” — although on a handful of issues such as free trade, it may find common cause with the “radical” right. Radical progressivism embraces the tradition of populism and frequently adopts a discourse of the virtuous commoner organizing against the corrupt elite. It is much more willing to make normative claims than rational progressivism, and tends to view conservatism as immoral and contemporary American liberalism as amoral (at best). Its project is not reform but transformation.

It should come as no surprise that I regard myself as a rational progressive. I believe in intellectual progress — that we, as a species, are gradually becoming smarter. I believe that there are objectively right answers to many political and economic questions.

I believe that economic growth is both a reflection of and a contributor toward societal progress, that economic growth has facilitated a higher standard of living, and that this is empirically indisputable. I also believe, however, that our society is now so exceptionally wealthy — even in the midst of a severe recession — that it has little excuse not to provide for some basic level of dignity for all its citizens.

The truth is, I don’t particularly care whether you call me a “progressive” or not. In fact, I’m suspicious of people who line up on the same side of the ideological divide on every single issue. The world is more complicated than that, especially when one strives to see the world through a scientific, empirical lens. While progressives, in my view, clearly have the preponderance of good ideas, they do not have a monopoly on them. Nor do conservatives have a monopoly on bad ideas, especially when radical progressives flirt with Marxist modes of discourse.

Let me be very clear about what I am saying. I believe that our country needs a lot of work — a lot of work — almost certainly more work than Barack Obama is going to be able to accomplish in four or eight years. I believe that greater awareness and greater participation on behalf of everyday citizens is almost certainly a necessary condition to facilitate that work. To the extent that blogs, political campaigns, church groups, labor unions, and whatever other organization you can think of can coalesce that participation and turn it into a “movement”, I am all for the “movement”.

But if someone wants to marshal an army to fight a battle of wills while playing fast and loose with the truth and using some of the same demagogic precepts that the right wing does, I am not particularly interested in that. In fact, I think it is acutely dangerous.