Good news, evidently, comes in twos for the gay rights movement. A pair of new polls shows for the first time a plurality of Americans in support of gay marriage, although they are contradicted by some other recent evidence.

There are two basic types of polls on gay marriage. The first type of poll simply asks the respondent whether or not they approve or disapprove of gay marriage; the second type gives them a three-way choice between gay marriage, civil unions and no legal recognition.

Up until now, according to the database compiled by PollingReport.com, the closest gay marriage had come to achieving a plurality on the first type of poll was from a Time/SRBI survey in August, 2008, in which likely voters were evenly divided 47-47 on their support for gay marriage rights. However, a new poll from ABC News and the Washington Post gives gay marriage an outright plurality, with 49 percent of adults supporting gay marriage and 46 percent opposed.

Although these polls represent cheerful news for supporters of gay marriage, they are contradicted by some other recent evidence. In particular, a Quinnipiac poll, also released today, had just 38 percent in favor of gay marriage against 55 percent opposed. Quinnipiac did show a 57 percent majority in support of civil unions.

In addition, both the CBS/NYT and ABC/Post polls contained a very low number of Republicans, although because that trend has been reflected in several other recent surveys, it is hard to tell whether it is a statistical fluke or represnts some sort of emerging trend.

Personally, I think it is somewhat unlikely that gay marriage has in fact achieved plurality support, although I suspect it has come fairly close, and momentum clearly seems to be on its side. A summary of all gay marriage and civil unions polling since the passage of Proposition 8 follows below. 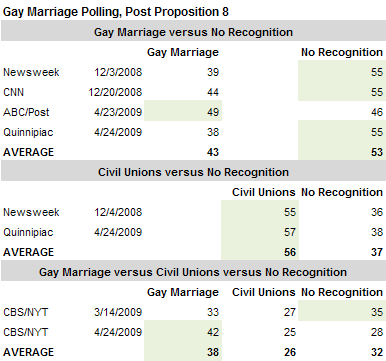