In recent posts, I’ve expressed some sympathy toward Wall Street professionals, whom I think are too easy to stigmatize for the economic crisis that we find ourselves in. This does not mean, however, that I don’t think these guys (and they are almost always guys) aren’t overpaid. On the contrary, there is some rather compelling economic evidence that they are making more than they are worth.

Between 1992 and 2007, pay in the securities industry roughly doubled in real dollar terms, from an already-high $119,064 per employee to an extraordinarily high $234,594 per person. That 97 percent increase was by far the highest of any of the 61 industry sub-classifications tracked by the Bureau of Labor Statistics (the average American worker’s pay increased by about 20 percent over this period).

Why did Wall Street pay increase so substantially during this period? There are a lot of interesting hypotheses, but the chart below, taken from a new paper (.pdf) written by Thomas Philippon of New York University and Ariell Reshef of the University of Virginia, provides perhaps the most compelling case. There has historically been a very strong relationship, they find, between the amount of deregulation in the financial services sector and the pay that its employees receive: 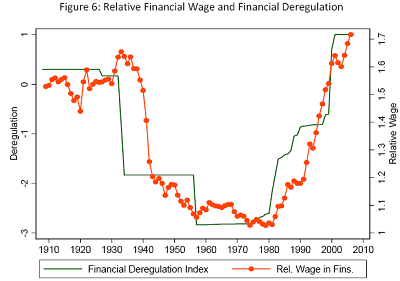 Wall Street pay has been very high before — in the Pre-Depression Era that was characterized, like the era we find ourselves in now, by extremely lax regulation. Philippon and Reshef hypothesize that “regulation inhibits the ability to exploit the creativity and innovation of educated and skilled workers [while] deregulation unleashes creativity and innovation and increases demand”. In other words, the laxer the regulatory environment, the more ways there are to try and beat the system — and the more Wall Street is willing to pay for people who can figure out ways to do so. Products like credit default swaps, for instance, are extremely complex and require much skill to arbitrage, far more so than the trading of ordinary stocks and bonds.

Even accounting for the fact that laxer regulatory environments increase the premium on highly-skilled workers, however, Philippon and Reshef find that professionals in the securities industry are overpaid. Specifically, they are overpaid by roughly 40% relative to their educational backgrounds and risk of job loss. This can be inferred, for example, by comparing the pay of Wall Street employees to that of engineers, two jobs that require broadly similar skill sets — the gap between engineer and financier pay has been increasing: 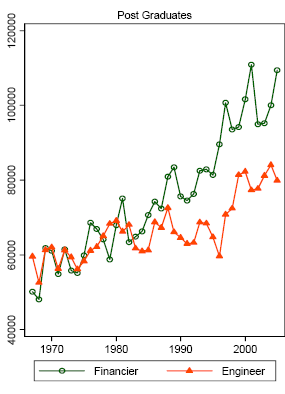 One thing that Philippon and Reshef don’t address is why and how this discrepancy has managed to sustain itself. Say that you have a set of identical twins, Marvin and Melvin; Marvin works on Wall Street and makes $140,000 per year, and Melvin works as an engineer and makes $100,000 per year. What should happen, in an efficient market, is that Melvin will undercut Marvin; he’d be willing to do Marvin’s job for, say, $110,000 per year. This would save the firm $30K per year and so they should hire Melvin. But this has largely not been what’s happening.

I have a pet theory about why this has occurred. My hunch is that the financial services sector has been artificially limiting its labor supply by confining its hiring to an extremely small number of elite undergraduate and business schools, such as the Ivy League, the U. of Chicago, Stanford and M.I.T. Maybe the reason that Marvin is an investment banker and Melvin an engineer is because Marvin went to Yale and Melvin went to Purdue, and the bank only recruits at Yale and not at Purdue. Indeed, while the participation of Ivy League graduates in leadership positions in non-financial companies has been decreasing, the same has not been true at investment banks. One can easily imagine, moreover, how this trend could be self-perpetuating. You get a bunch of Harvard, Yale and Stanford grads in management positions at investment banks, and they’re probably going to be predisposed to hire other Harvard, Yale and Stanford grads.

This is something I have observed, for example, in the baseball industry: throughout most of the 1990s and the 2000s, baseball teams were almost certainly paying too much for free agent talent. But they were also making money hand over fist, and so the excesses were easy to ignore. Now that the recession has placed more profitability pressure on major league clubs, they have become much more efficient about optimizing their pay structures, and free agent salaries have declined.

In retrospect, it is clear that regulators did not have the human capital to keep up with the financial industry, and to understand it well enough to be able to exert effective regulation. Given the wage premia that we document, it was impossible for regulators to attract and retain highly-skilled financial workers, because they could not compete with private sector wages. Our approach therefore provides an explanation for regulatory failures.

That is, the excessive wages paid by Wall Street not only lure talent away from other parts of the private sector, but also from the public sector, where employees are subject to government wage controls. The very people who might be the most capable of enforcing regulations on the banks instead wind up working for them.

This is a very real problem. Some of the work that I did in my first job after college at KPMG involved valuing intellectual property in conjunction with international tax disputes. We had our economists, and the IRS had theirs. The thing was, however, that our economists were better than the IRS’s, because if someone at the IRS was any good, we’d hire them away and treble their salary. Part of a good regulatory reform plan, then, would be to increase the salaries paid to employees at institutions like the Fed, the Treasury, the IRS, and the FDIC.

The more general point, however, is that if the Obama administration is serious about regulating the banks, they might also find that this places downward pressure on pay within the industry. What seems like two fights — on executive pay and regulation — may really be just one.