The new Greenberg Quinlan Rosner poll of Puerto Rico provides some hints at what turnout might be on the island.

In the survey, Puerto Rican adults were asked to rate their likelihood of voting in Sunday’s primary on a scale of 1 to 10. 46 percent rated themselves as at least a 6 out of 10. How many voters is this?

Puerto Rico had a July 2007 population estimate of 3.94 million. However, Puerto Rico is a young country; roughly 30 percent of Puerto Ricans are under age 18. That leaves 2.76 million Puerto Ricans who are old enough to vote; 46 percent of that total would be 1.27 million.

But saying you are going to vote is different than actually doing so — particularly when the primaries are held on a Sunday afternoon and the polls are only open until 3 PM. What percentage of voters who say they’re going to vote actually do?

We can get some clues about this from SurveyUSA polling in recent primaries. Characteristically, SurveyUSA discloses a lot of information about the way that they conduct their surveys, including the proportion of adults who wind up getting classified as “likely voters”. In Pennsylvania, for example, SurveyUSA classified 39.4 percent of Pennsylvanian adults as likely voters in the Democratic primary, whereas in practice, 23.9 percent of Pennsylvanian adults actually voted. The ratio between these two numbers (23.9/39.4) is 60.7 percent, which is what we’ll call the follow-through rate. 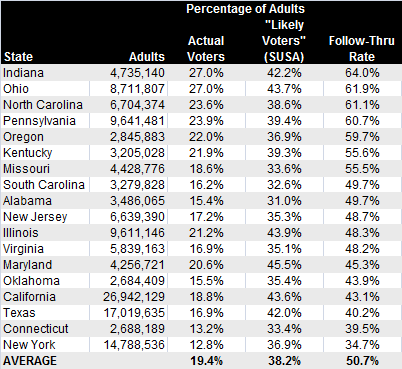 The follow-through rates have ranged from 34.7 percent in New York to 64.0 percent in Indiana (they have tended to be higher in recent primaries). Does this mean, by the way, that SurveyUSA is identifying too many likely voters? Not necessarily, because unless you know which voters to screen out, you might throw the wrong voters out of your sample and wind up doing more harm than good.

In any event, the fact that SurveyUSA uses a relatively lax likely voter screen is helpful because that’s also what GQR is using; there are no questions, for example, about prior voting behavior. In fact, GQR did not even ask voters whether they were registered, so their screen was probably too lax. But this is more or less an apples to apples comparison.

And as such, taking the high and low end of the range, we’d estimate that somewhere between 34.7 percent and 64.0 percent of Puerto Rico’s 1.27 million “likely voters” will actually turn out to vote. That would represent a turnout of between 441,000 and 813,000.

Intuitively, this seems like a pretty reasonable range. Puerto Rican officials expect a turnout of about 500,000. Joe Sestak, who might be echoing the expectations of the Clinton camp, says 450,000 to 500,000. Puerto Rican elections expert Manuel Alvarez-Rivera guesses 600,000. The record for turnout in a Democratic primary is 870,000, when Ted Kennedy made a visit to the island in his challenge to Jimmy Carter. So there are a lot of numbers coming up in that mid-to-high six figures range.

Unfortunately for Clinton, this is probably not the margin she would need to win the +Florida version of the popular vote count. Presently, Obama holds a lead of 273,877 votes if Florida (but not Michigan) is counted for Senator Clinton. Obama is likely to net about 25 or 30 thousand votes between Montana and South Dakota, so we’ll round that number up to 300,000. That’s how many votes Clinton will need to win in Puerto Rico to lay a claim on this version of the popular vote.

The problem is that if turnout is only 500,000, Clinton would need to win by 60 points (e.g. 80-20) in order to secure that margin. And that just ain’t going to happen. 20 points? 25 points? Possible, considering how little anyone knows about this primary. 30 points? Who knows. But 60 points isn’t going to happen.

Even if turnout got up to the 870,000 number from the Kennedy-Carter election, Clinton would still need to win by about 34 points to net 300,000 votes out of her effort. That seems like a stretch.

Moreover, there may be something of an inverse relationship between turnout and Clinton’s performance. The GQR poll says that Clinton’s margin is 19 points among likely voters, but only 13 points among all voters. She’s also outfundraised Obama in Puerto Rico about 2:1, which suggests that she has more support among the island’s mainland-connected elites. So if Clinton wants to maximize her percentage of the vote, she might hope for a lowish turnout. However, Clinton not only needs to maximize her percentage of the vote; she also needs to maximize turnout. And that could be a problem for her because it looks like the percentage of Obama voters goes up as you drill down deeper into the population.