4:40 AM [Nate]. Miller’s leading is holding with about 71 percent of the vote reported — but Alaska is apparently done counting until the morning. Speaking of which, I need to get to bed. Thank you immensely for your patronage of FiveThirtyEight over the past two-and-a-half years.

3:33 AM [Nate]. Miller retains the lead at 52-48 in Alaska with around half the vote counted, although the speculation is that Murkowski may recover as more vote comes in from the Alaskan wilderness, which benefits significantly from federal pork. Meanwhile, Ben Quayle was declared the winner in AZ-3 — although with only 23 percent of the vote. The Democratic Gubernatorial primary in Vermont, meanwhile, remains much too close to call.

1:21 AM [Nate]. Tuned out there for a long while (my “dinner” of two Papaya Dogs and a Red Bull didn’t give me as much staying power as I thought), but Lisa Murkowski — surprisingly — slightly trails Joe Miller with about a quarter of the vote in from Alaska.

11:33 PM [Ed]. Back in Vermont, AP finally got hold of the Burlington results a couple hours after the Burlington Free-Press reported them, and now with over 80% of the precincts reporting, Doug Racine leads Peter Shumlin by 199 votes, and Deb Markowitz by 545 votes. Regardless of who wins, admirers of the civil tone of this primary will be pleased that turnout seems to have considerably exceeded the pre-election estimates.

11:13 PM [Ed]. While we were preoccupied with Florida and Vermont, the two GOP congressional runoffs in OK were decided, and neither was close. Of the two underfunded and little-known challengers to Dan Boren in OK-02, the older one, veterinarian Charles Thompson, defeated Daniel Edmonds by a 2-1 margin. Now we’ll wait to see if the NRCC decides to make Thompson’s campaign rich and famous.

In the higher-visibility OK-05 runoff for Mary Fallin’s House seat, church camp director and political neophyte James Lankford beat Club for Growth endorsee Kevin Calvey by a surprising 65-35. Calvey got perhaps a bit too nasty against Lankford, and also strained credulity by trying to create an Oklahoma version of the Islamic/Shariah Law threat.

11:12 PM [Nate]. Ben Quayle’s race is interesting, with four candidates between 16 and 22 percent of the vote. Quayle is on top for now though.

11:04 PM [Nate]. Good night so far for PPP, which unlike certain of its counterparts, had the temerity to poll actual elections.

10:59 PM [Nate]. Possible we’ll get some quick calls in Arizona, which has been counting ballots for an hour, but has a state law preventing them from releasing the results until just about … now.

10:38 PM [Nate]. Rasmussen — which polled the McCain-Hayworth primary eight times in a race where there was some disagreement among pollsters — was not willing to do so during the final four weeks of the campaign. Our pollster ratings are always becoming more sophisticated and we’re going to be looking at appropriate ways to punish pollsters who dodge putting their necks on the line.

10:35 PM [Ed]. If Rick Scott does win, it’s a good news/bad news scenario for Alex Sink and Florida Democrats. The good news is that most of the attack lines on Scott have already been aired, and only have to be reinforced; plus it really may take an effort to get Florida Republicans off their hands to help him. The bad news is that he’s the East Coast Meg Whitman, and has about $175 million in net worth that’s theoretically available to spend.

10:16 PM [Ed]. The McCollum-Scott race is all coming down to South Florida. With nearly three-fourths of the precincts reporting, Scott’s lead is about 40,000 votes. Of 1946 precincts still out, 1597 are in just three counties: Miami-Dade, where McCollum’s winning 63-30; Palm Beach, where he’s winning 48-42; and Broward, where he’s winning 48-46. It will definitely tighten up, but it’s unclear whether there are enough votes out for McCollum to catch up.

10:13 PM [Nate]. There were some strong differences of opinion among pollsters in the Florida governor race, which Scott now looks increasingly likely to win.

9:42 PM [Ed]. With a third of the precincts voting in VT, according to AP, Deb Markowitz leads Doug Racine by 14 votes, with Peter Shumlin back another 270 votes. That’s with no votes in from Burlington or Chittendon County, which together normally cast about a fourth of the statewide Democratic vote.

But the Burlington Free Press is tweeting that Racine’s won Burlington pretty handily, with Shumlin second and Markowitz third. So if that’s right, Racine should soon pull into the strongest lead of the night.

9:36 PM [Nate]. We now have significantly more sophisticated methodology to handle three-candidate races in the Senate. Don’t know that Kendrick Meek is likely to be terribly happy about the result that we’ll show for him tomorrow. Even if he peels some votes off from Crist, it’s going to be quite difficult for him to knock off both Crist and Rubio simultaneously. We assume super high variance in three-candidate races, but Meek’s just not winning very many simulations.

9:09 PM [Nate]. Stata is almost done processing the Senate forecasting script. We’re running “retro” forecasts every two weeks dating back to February 1st, so you can get a sense for how our model’s sense of each race will have evolved over time.

9:04 PM [Ed]. With over half the precincts reporting in Florida, it looks to me like the thread Bill McCollum is holding onto in hoping for victory is the possibility that his buddy Jeb Bush will get him a huge win in Miami-Dade. Rick Scott has fought him to a draw in the Tampa-St. Pete area, beaten him in SW FL, and looks to be running even or better in the counties running from Melbourne down to Ft. Lauderdale. Scott is also winning Duval County handily. McCollum’s Orlando base has largely already reported. There’s not much in yet from the Panhandle, but Scott’s winning Bay County (Panama City) easily.

Though only one precinct has reported in Miami-Dade, it looks like the early votes have been reported, and McCollum’s winning better than two-to-one. He’ll need that trend to continue.

8:44 PM [Nate]. Blue Dog Allen Boyd and pretending-not-to-be-a-future-Blue-Dog Al Lawson locked in a tight battle in FL-2 so far. The vote is 51-49 so far, favoring Boyd, with Lawson having benefited from a strong vote in Leon County.

FL-24 is also looking very competitive on the Republican side.

8:30 PM [Ed]. AP called the Senate race for Meek because he was winning just about everywhere; better than 2-1 in Pinellas; 2-1 in Hillsboro and Sarasota; nearly 2-1 in Duval; 20 points in Brevard.

8:24 PM [Ed]. Very early returns from VT show expected close four-way race among Markowitz, Dunne, Shumlin and Racine. None of the larger towns or counties are in. Total turnout could fall under 40,000 votes.

8:22 PM. These next couple of weeks are going to be really important in the Florida general election campaign. Rubio is the one who has a good 30, 35 percent of the electorate locked away, where as Crist and Meek are probably in more direct competition for the center-left of the electorate. Crist can’t afford to let Meek gain too much momentum after his convincing primary win tonight and I might expect some subtle movement toward his left. Or not-so-subtle, since Charlie Crist doesn’t do subtle well.

8:17 PM. Wow, the AP has already called the race for Kendrick Meek. That was fast.

8:05 PM. No surprise based on late polling, but Kendrick Meek with a big lead over Jeff Greene, who may have had one of the more pointless candidacies this side of Fred Thompson.

8:00 PM. It’s a busy night. We’re just now spitting out the final run of our new-and-improved Senate model — which will debut on NYTimes.com tomorrow. Meanwhile, I’ve got another 1,000 words or so to get into my editors, and we’ll be at least trying to check in on the five states — in literally every corner of the country — which are holding some kind of primary election tonight. 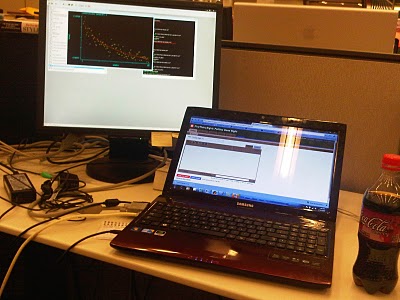 We’ll keep this slow-paced and sort of open-ended — a necessity when polls don’t close in Alaska until midnight. Perhaps later on in the evening, I can grab a tasty beverage and even take a few questions from the comments section. There’s a lot of stuff that we’re very excited to roll out for you over the next week or so.