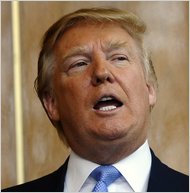 Timothy A. Clary/Agence France-Presse — Getty Images Donald Trump has been increasingly visible on television and in political news stories.

When thinking about the candidates for the 2012 Republican nomination, we can divide them into basically three groups.

First are candidates in a group I’d call the Fairfax Five, Fairfax being the name of a wealthy Washington suburb in Northern Virginia. These are the candidates who have the seal of approval of the Republican establishment thinkers in Washington. More specifically, they’re the candidates endorsed by George F. Will in his March 5 column:

These candidates are playing it by the book, hiring staff and developing campaign infrastructures. They get more attention in the mainstream media than in the blogosphere. They are perceived as being electable and holding some reasonable appeal to independent voters — although I think Haley Barbour, with his track record as a lobbyist and a history of having made what are perceived to be racially insensitive remarks — is a questionable case.

The counterpart to the Fairfax Five are the Factional Five. They are unpopular with independent voters and, instead, are competing mostly for Tea Party voters and other conservatives that vote within the Republican primary. They tend to be good at drawing attention to themselves, especially on blogs and cable television shows. These candidates are Sarah Palin, Newt Gingrich, Michele Bachmann, Donald Trump and Ron Paul.

That leaves a few uncategorized candidates, the most prominent of whom is Mike Huckabee — who does not get much love from the Beltway even though he polls reasonably well against President Obama — along with a couple of other odd cases like Rudolph W. Giuliani and Rick Santorum.

When I think about Mr. Trump, whose share of the Republican primary vote is rising in some polls (in fact, he’s tied for first in one of them), I think about the Fairfax Five and the Factional Five. If Mr. Trump were going to run for president, it might have been more natural for him to do so as a social moderate but fiscal conservative, touting his executive experience and the virtues of free-market capitalism. Instead, he has run far to his right, giving voice to false and misleading claims about Mr. Obama’s birth certificate, and reversing his prior, more moderate positions on gay rights and abortion.

While Mr. Trump, a creature of New York rather than of Washington and one who carries his share of personal baggage, might never have been the first choice of establishment Republicans, he now threatens to become a problem for them. Mr. Trump wasn’t all that popular to begin with — Talking Points Memo’s poll tracker has him with ratings of 32 percent favorable against 44 percent unfavorable among the general public — and those numbers are more likely than not to worsen as he is viewed less as a celebrity and more as a politician with some outside-the-mainstream views.

The opportunity for Mr. Trump may have been created by the demise of the candidate who might be thought of as the founding member of the Factional Five: Sarah Palin, whose numbers have declined among Republican voters as she has received more criticism from the establishment. For the establishment Republicans, it must feel like a game of Whac-A-Mole. Just as Ms. Palin’s numbers decline, candidates like Mr. Trump and Ms. Bachmann — who could be nearly as problematic next November — pop up in her place. 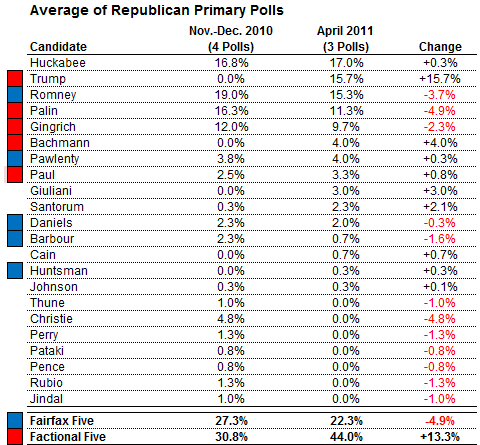 Betting markets take a more optimistic view of the Fairfax Five: the political futures market Intrade collectively has them with a 60 percent chance of winning the nomination, versus 24 percent for the Factional Five.

I’m not convinced that these markets are underrating the Factional Five, each one of whom has some significant liabilities as a candidate and several of whom may not run. I do wonder, however, whether the sorts of candidates that Mr. Will likes will ultimately have enough Main Street charisma and Tea Party bona fides to win over Republican primary voters, especially in conservative states like Iowa and South Carolina. There is plenty of time left, but at some point, for a candidate like Mr. Pawlenty to prevail he has to at least begin to poll in the high single digits rather than the low single digits, which would suggest he has some flesh-and-blood appeal.

That Mr. Trump, with such a cynical strategy, can rocket up in the polls so quickly suggests that the Fairfax Five and the Factional Five are both flawed in their own way. Instead, I suspect the value bets in markets like Intrade — and by extension, relative to conventional wisdom — are those candidates who belong to neither group.

Mr. Huckabee, who is given just a 1-in-20 chance of winning the nomination by Intrade, seems woefully underrated, even in consideration of the fact that he might not run. But there are other candidates deserving serious consideration who, up to this point, have entirely denied their interest in the presidency. Chris Christie, if he generates a little bit too much fascination here in New York, does quite well in straw polls of Republican activists while also having some appeal to the establishment. Paul Ryan and Marco Rubio, although more likely to run in 2016 or 2020, might take a look at this year’s field and perceive a unique opportunity. Rick Perry, who can raise oodles of money down in Texas, is a plausible late entrant.

It’s usually a mug’s game to bet on candidates who have declined their interest in an election, and who may have all sorts of personal and professional reasons for doing so. But if you could place a bet on “none of the above” as a group, you might get a good return on your investment.