Donald Trump’s campaign for president seems to be in chaos. On Monday, Trump fired his campaign manager, Corey Lewandowski, even though he previously promised he would not do so when other Republicans called for Lewandowski’s head. Whether the firing was the result of personal or strategic differences with Trump or his family, what’s clear is that it comes at a moment when Trump’s general election polling is spiraling downward in a way his primary polling never did.

Winning appears to be of the utmost importance to Trump. He brings it up constantly. When Trump is ahead, he has been resistant to changing direction. When Lewandowski was arrested in March and charged with battery on a reporter, Michelle Fields, Trump was well ahead in the polls. In the FiveThirtyEight national polling average, he led Ted Cruz by about 14 percentage points.

Moreover, Trump’s advantage in the national primary polls was steady. The result was that Lewandowski retained his position. (The charges against him were later dropped.)

But things are very different now that the primaries are over. Trump’s current polling looks like something the Clinton campaign drew up in its wildest fantasies. He’s down 6 percentage points in the Real Clear Politics average. While that in itself is not great, it’s the direction of the polling average that is most worrisome for him. After knocking Ted Cruz and John Kasich from the race after the Indiana primary on May 3, Trump steadily gained in the polls. He even took a slight lead in the Real Clear Politics average in mid-May. Since that point, however, Trump’s position relative to Clinton’s has nosedived.

The amazing thing about Trump’s primary campaign was that he was almost always winning. Even as some analysts (including me) dismissed early primary polls, Trump gained a lead early on in the national primary surveys that he never relinquished. Take a look at this chart, which plots Trump’s general election numbers against Clinton in the Real Clear Politics average against his standing against the rest of the field in the primary per the FiveThirtyEight average. 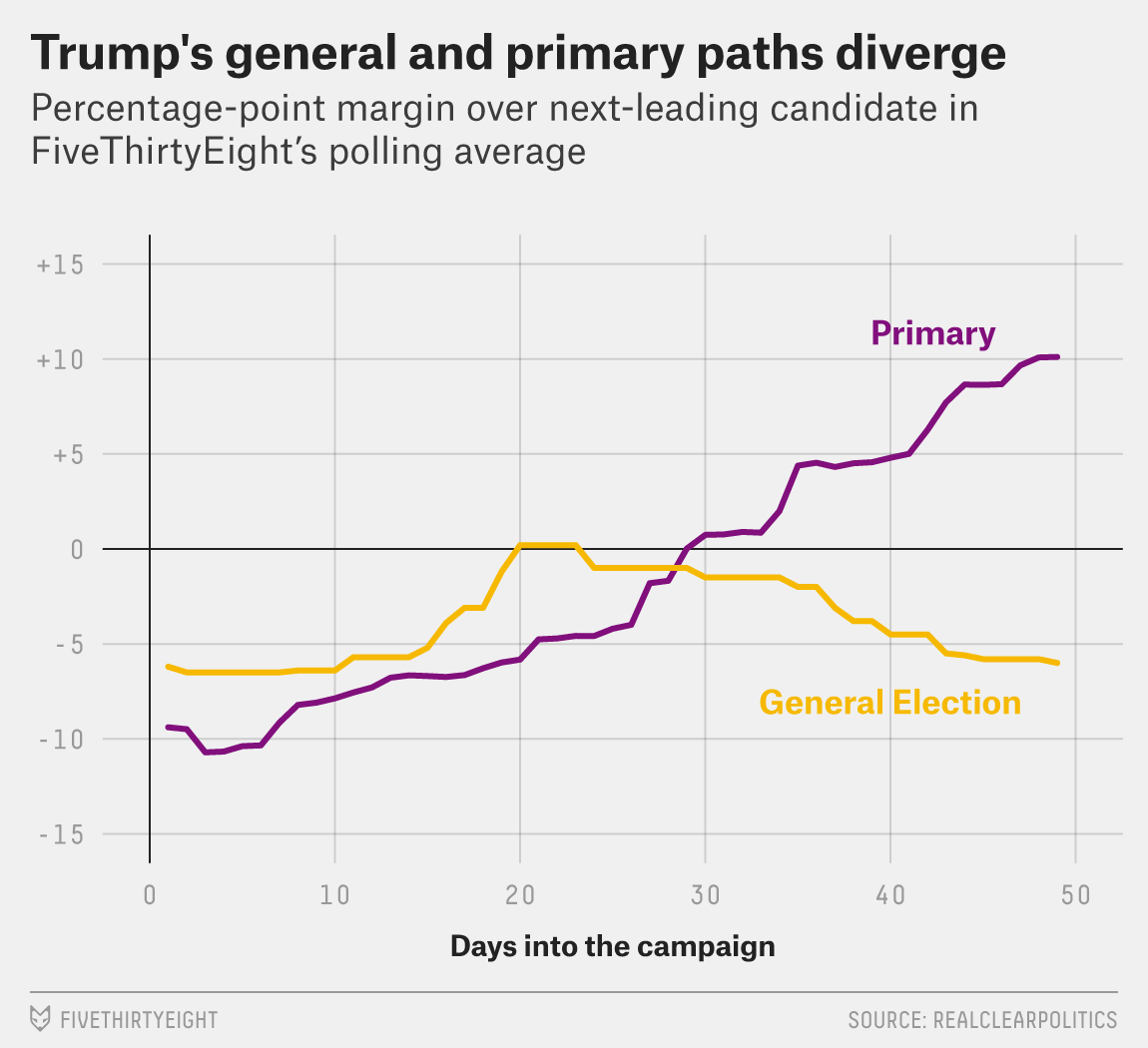 Trump took his first lead in the primary on July 14, which was 29 days into his campaign. At the same point in the general election (May 31), he had already given up his lead to Clinton. By Day 49 into the primaries, Trump was up 10.1 percentage points over his nearest competitor, compared with being down 6 percentage points now. That’s a 16.1 percentage point difference in standing.

Trump, who once claimed that he personally made polls “a very important thing,” can’t be unaware that the polls have now turned against him. Whatever Trump was doing in the primary has not been working in the general election. The decline became too obvious to ignore, and at the same moment, Trump decided Lewandowski had to go.

The question is whether firing of Lewandowski will make much of a difference. I wouldn’t dismiss it out of hand. We’ve seen instances in the past where changing the head of the campaign has resulted in a change of fortunes for a candidate.

In June of 2000, Al Gore brought on Bill Daley to replace Tony Coelho as his campaign chairman. Gore was down about 5 percentage points to George W. Bush in an average of June 2000 surveys, and he ended up winning the national popular vote by 0.5 percentage points over Bush. Was it the switch to Daley that was responsible for Gore coming back in the polls? It’s impossible to know, though it does show that a campaign that seems to be a loser can become a winner even amidst chaos.

More recently, John McCain dropped Terry Nelson as his campaign manager in July 2007 in favor of Rick Davis. That was during a polling and money slide much like the one Trump is suffering through now. It took a little while, but McCain eventually was able to reverse his slide and win the Republican nomination. Again, it’s difficult to disentangle how much of McCain’s eventual success was because of a change at the top. What we can say is that candidates who once found some success on the campaign trail (as McCain did in 2000) shouldn’t be counted out even if it seems like everything is going in the wrong direction later on.

Still, my guess is that Lewandowski was a symptom and not the cause of Trump’s campaign problems. For example, Lewandowski wasn’t the one who, day after day, was attacking Judge Gonzalo Curiel based on his ethnic background which drew widespread criticism from leaders in Trump’s own party. Trump is still Trump, President Obama is fairly popular and the economy is about average. Right now, Trump is losing, and he has a tough road ahead to reverse that with or without Lewandowski.