As the Democrats’ investigations of the Trump administration begin to unfold on Capitol Hill, President Trump lashed out with a series of tweets claiming that Democrats are going “nuts” with their oversight. “The Republicans never did this to President Obama, there would be no time left to run government,” he wrote, adding, “PRESIDENTIAL HARASSMENT! It should never be allowed to happen again!”

To some extent, Trump’s frustration is understandable. The Democrats are planning an aggressive slate of investigations against him and his administration. Earlier this week, the chairman of the House intelligence committee, Adam Schiff, announced that his committee would continue to probe potential ties between the 2016 Trump campaign and Russia, as well as dig into whether Trump’s financial interests are influencing his decision-making. House Democrats also began the process that would allow them to formally request Trump’s tax returns. And in a hearing scheduled for Friday, Democrats are expected to grill acting Attorney General Matthew Whitaker about whether he has passed information about special counsel Robert Mueller’s investigation into Russian meddling in the 2016 election to Trump or Trump’s private legal team (although Whitaker now says he won’t appear if Democrats don’t relinquish their power to subpoena him).

But Trump is wrong to say what he’s experiencing is unprecedented. Presidential investigations by Congress have been led by both Democrats and Republicans and are actually the norm when the House is controlled by a different party than the president’s. According to data compiled by political scientists Douglas Kriner and Eric Schickler, congressional investigations of the executive branch tend to be concentrated during periods of divided government — at least, in the House.1 The number of days spent investigating potential executive misconduct spikes whenever the president and the House’s majority party aren’t the same: 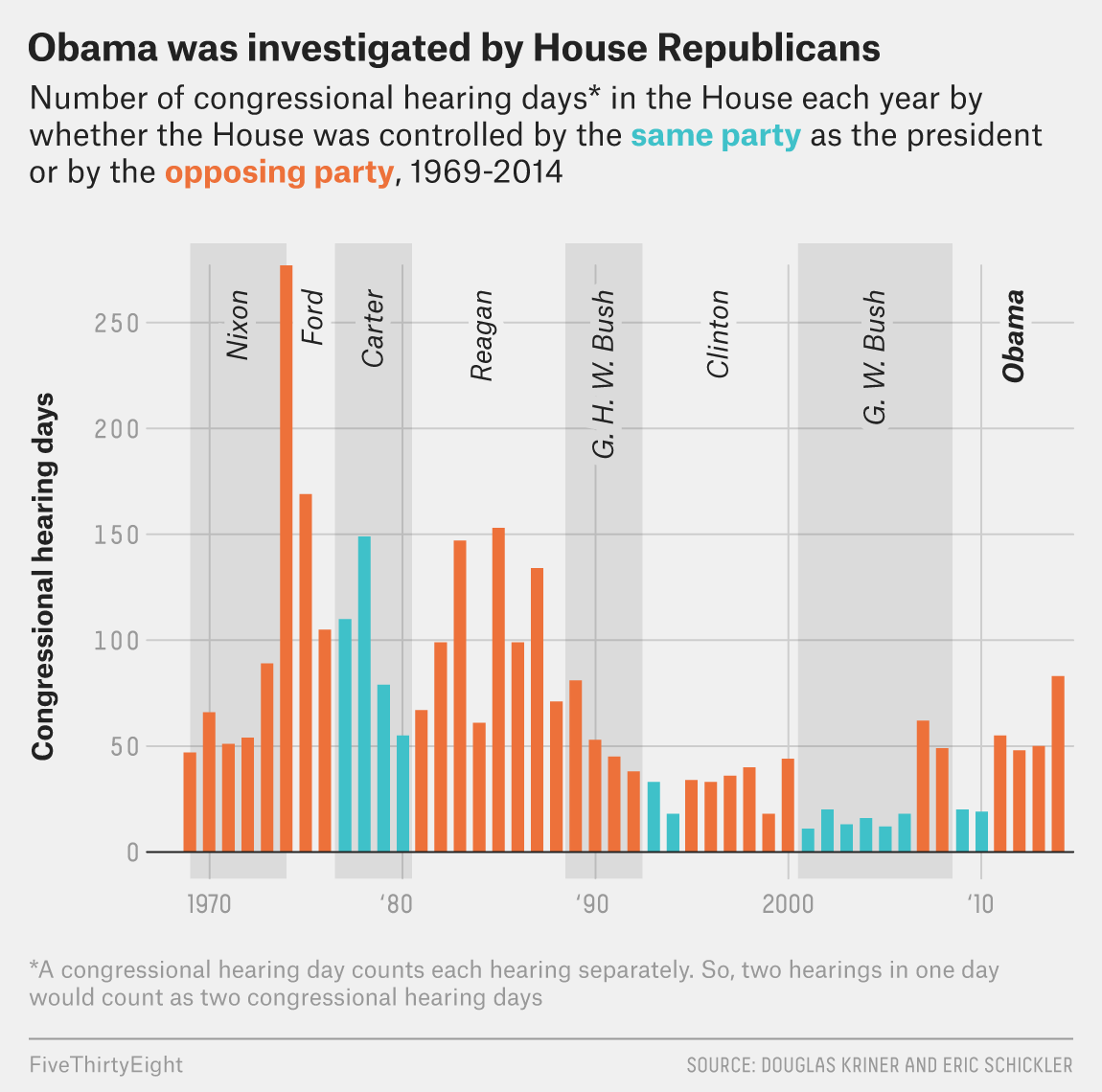 During the Republican administration of George W. Bush, the number of days spent on hearings related to executive misconduct shot up when Democrats took control of the House in 2007 and began a wide range of investigations against Bush. Investigations spiked again after Republicans won back the House in 2010 and launched a series of investigations into the Obama administration, which led to some political messes for Obama. And the House GOP’s yearslong probe of the 2012 attack on the U.S. diplomatic mission in Benghazi, Libya, also ended up shaping views about Hillary Clinton in ways that may have damaged her politically, not least by unearthing the existence of a private email server that dogged her throughout her 2016 presidential campaign.

This effect is even more pronounced in periods of significant political polarization, according to Kriner. “Congress’s ability to investigate the president has really become weaponized over the past few decades,” he said. “When Congress is going after the president aggressively, you see an erosion of the president’s support.”

Whether this pattern is a good thing is another question. The same partisan motivations that spur Democrats and Republicans to amp up their investigations when the opposing party controls the White House could also lead them to ignore or downplay issues that are ripe for investigation when the president is also a member of their party. But Obama, George W. Bush and Bill Clinton all emerged from at least one midterm election in which their party lost the House and they ended up facing a new barrage of investigations. So even though Trump may feel that Democrats’ investigations are unfair, his situation is not unique.

Trump lashing out at democrats over Presidential investigations