More so than Joe Biden, President Trump got a small boost in head-to-head polls coming out of the party conventions (although it appears to have been short-lived). But Biden got a convention bounce of sorts, too: The share of voters with a favorable opinion of him has ticked up.

Several pollsters have asked Americans whether they have a favorable or unfavorable view of both Trump and Biden since the Republican National Convention ended on Aug. 27. On average, these polls gave Biden a 48 percent favorable rating and a 46 percent unfavorable rating — or a net favorability rating of +3 percentage points.1 That’s a slight, 4-point increase from his net favorability rating in the same polls before the conventions. To be more minute about it, his net favorability rating actually went from -2 points in polls conducted entirely or mostly before the conventions, to +3 points in polls conducted entirely or mostly between the two conventions2 (after the Democratic National Convention spent four days talking him up), to +3 points in the post-convention period. In some cases, this uptick was within the polls’ margins of error, but the overall upward trend was still pretty clear.

Trump, on the other hand, went into the convention period with lower favorables than Biden and does not appear to have emerged from it any better liked. Before the conventions, his average net favorability (according to these same pollsters) was -13 percentage points. After the DNC started, but before the RNC, his net favorability rating ticked down to -15 points. And the RNC didn’t do much to boost his standing. In the most recent round of surveys from these pollsters, Trump has an average favorable rating of 41 percent and an average unfavorable rating of 55 percent. In other words, his net favorability rating is now -14 points.

I don’t want to overstate the bump Biden got relative to Trump, though: The increase in Biden’s favorables, much like Trump’s improvement in head-to-head polls, was small by historical standards. As former FiveThirtyEight writer Harry Enten found in 2016, candidates from Jimmy Carter in 1980 to Bill Clinton in 1992 to Al Gore in 2000 to George W. Bush in 2004 saw double-digit surges in their net favorability rating after the conventions, as measured by CBS News polling. That definitely didn’t happen this year.

In addition, Enten found that favorable ratings can also fluctuate a lot after this point in the election cycle. The average candidate between 1980 and 2012 experienced a 6.4-point change in his net favorability between CBS News’s post-convention poll and its final poll of the election. So there’s plenty of time for Biden to sink, or Trump to rise — or Biden to rise, or Trump to sink — in popularity. On the other hand, the conventions’ failure to budge the candidates’ favorable ratings more than a few points could suggest that opinions of both Trump and Biden are already baked in, thanks to intense political polarization.

Speaking of polarization, a handful of the post-convention polls also asked respondents how strongly favorable or unfavorable they felt toward the two nominees. And going just by their “very favorable” and “very unfavorable” ratings, both candidates are underwater; that is, they are both more hated than they are loved.

But Biden still has the advantage in the polls that have asked about this. On average in these polls, since the conventions ended, 26 percent of Americans have said they view Biden very favorably, and 36 percent have said they view him very unfavorably (that’s -10 points on net). By contrast, Trump has an average “very favorable” rating of 29 percent and an average “very unfavorable” rating of 47 percent (-18 points on net).

That’s a much narrower gap than FiveThirtyEight contributor Michael Tesler found in late June, when Biden was at -3 points and Trump was at -23 points in that measure. But it still suggests that voters’ motivations to vote against Trump are higher than their motivations to vote against Biden. As Tesler argued earlier this summer, this could mean that Biden, not Trump, is the candidate with the enthusiasm edge in this election. 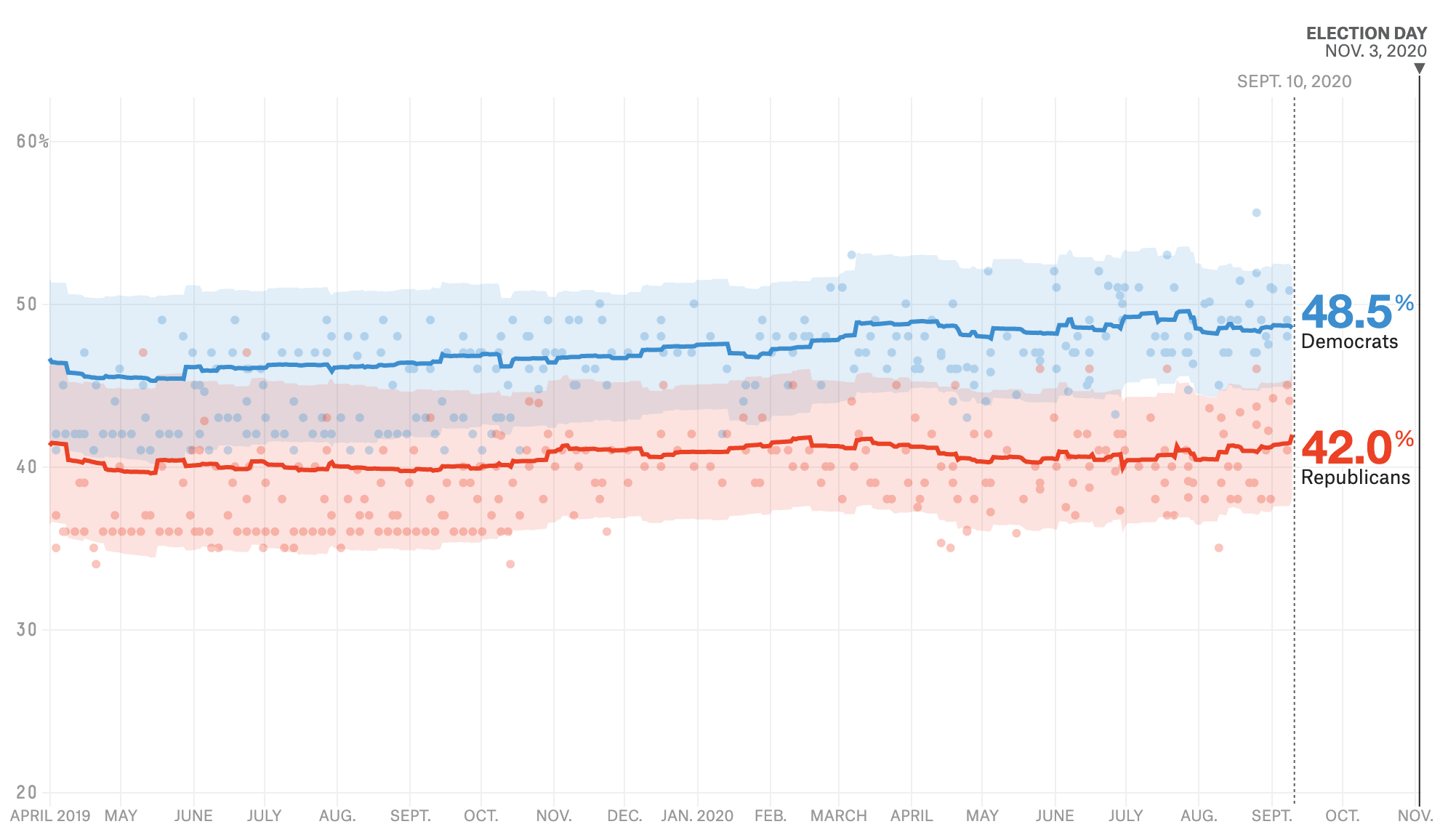