After a lengthy deliberation about his future, Pittsburgh Steelers safety Troy Polamalu announced late Thursday that he will retire from football, ending a 12-year NFL stint that saw Polamalu become one of the best and most recognizable players of his generation.

With Polamalu leaving the game at age 33, it’s worth looking back on his career. He was undeniably brilliant at his peak, helping to change the way the game was played, and there was a time when he was even on track for one of the best careers ever at his position. Unfortunately, injuries in recent seasons may also have robbed him of the chance to truly vie for GOAT status at safety. Polamalu’s is a complicated legacy that the numbers might help us unpack a bit.

As my Grantland colleague Chris Brown wrote early in the 2011 season, Polamalu — along with Ed Reed, Polamalu’s longtime counterpart on the division-rival Baltimore Ravens — helped change the way NFL teams played defense. In the long chess match between NFL offenses and defenses, Polamalu and Reed emerged at a moment when teams were still trying to figure out how to defend against inside runs while simultaneously keeping the league’s increasingly spread-out passing attacks in check. The answer, Brown wrote, was “Quarters” coverage, which (in theory) provides enough deep defenders to combat four verticals without compromising the number of defenders lined up in the box to stop the run if necessary.

Polamalu’s versatility helped turn that theory into reality. The success of Quarters hinges in no small measure on the safeties’ ability to execute a vast array of assignments, including tackling rushers in the open field, herding them into other defenders and alternating between man-to-man and zone skills in pass coverage. Fortunately for Pittsburgh, few safeties could match Polamalu’s mixture of run defense and coverage abilities. According to Pro Football Focus’s play-by-play grades, he ranks second among NFL safeties since 2007 against the run and third versus the pass.1

All of this played into Polamalu’s growing reputation as not just a future Hall of Famer, but one of the top safeties of all time. Through age 30, only Ronnie Lott (widely considered to be the best safety in NFL history) and Paul Krause had more career Approximate Value (AV) at safety than Polamalu. At the pace he’d set early in his career, Polamalu seemed to be on track to someday make a legitimate case as the greatest ever at his position.

But a preseason calf injury derailed Polamalu’s 2012 season, causing him to miss nine games and limiting him to 4 AV. And while he bounced back with a solid 2013 campaign — Pro Football Focus ranked him fifth among safeties that year, including the second-best coverage grade at the position — another leg injury (this time a sprained knee) hampered him throughout the second half of 2014, severely reducing his effectiveness. He barely graded out as above average last season according to PFF, ranking 48th out of 87 qualified safeties.

The recent downturn made Polamalu expendable and put any talk of his eventual place in the all-time safety pantheon on hold. Between the ages of 31 and 33, Lott racked up 33 AV and Krause produced 32; Polamalu only generated half as much. By the end of 2014, not only was he much further off their pace than he was three years before, but he even fell behind Reed in terms of career AV through age 33. 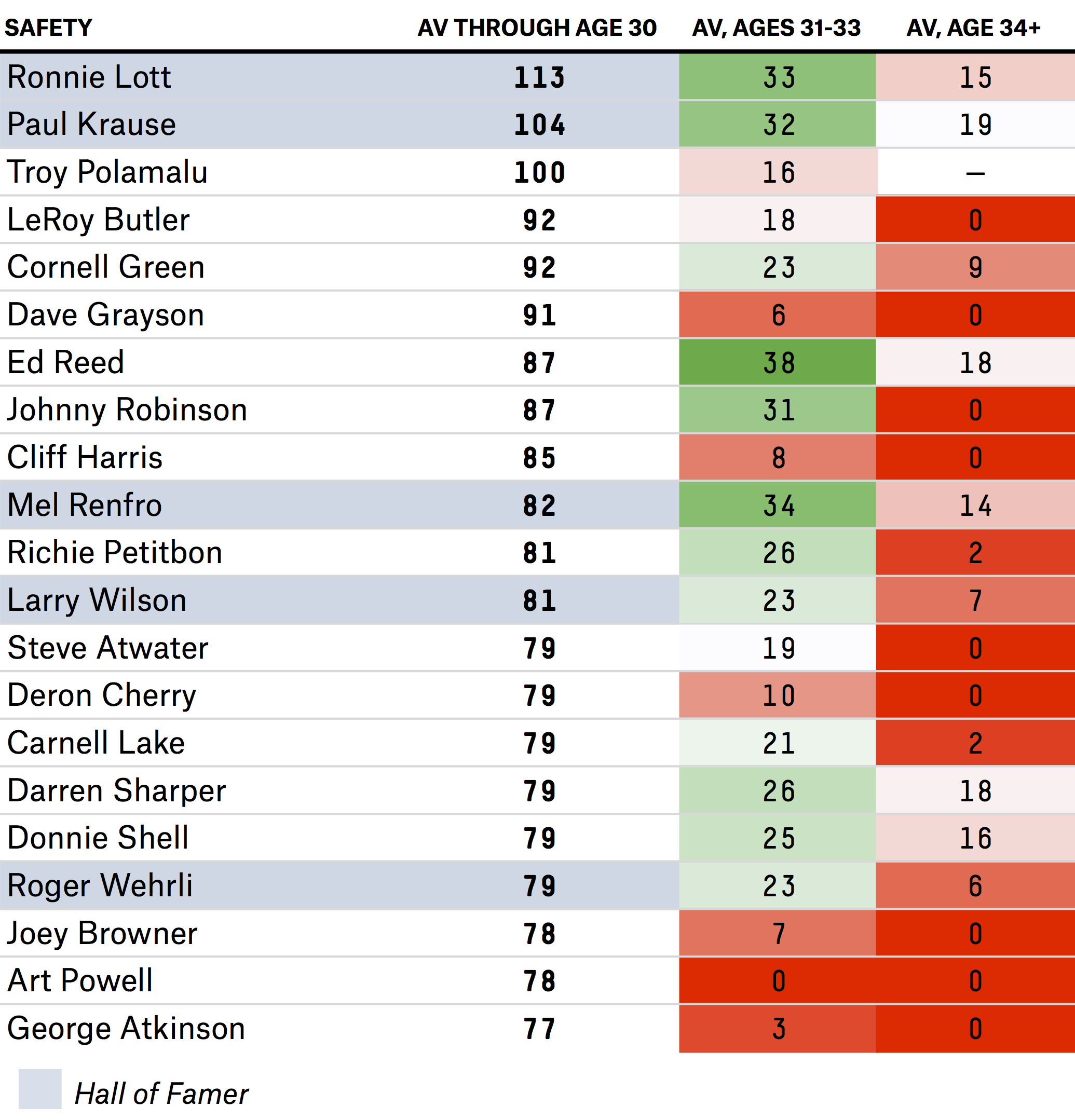 That’s why, when we hold Polamalu’s career AV up against other historical safeties, it’s now tough to argue that he belongs in the conversation for best-ever honors. What was once a relatively slim lead for Lott and Krause through age 30 balloons into a huge disparity in the lifetime AV rankings because each produced three times as much value as Polamalu did after turning 31. Likewise, Polamalu has also been passed on the all-time AV list by Reed, Brian Dawkins, Ken Houston, Eugene Robinson and Darren Sharper,2 all largely on the basis of performance after age 30. The only way Polamalu makes his case as the greatest safety ever is if we freeze time after the 2011 season.

And while I’m reasonably confident that Polamalu will make the Pro Football Hall of Fame someday, even that’s not as much of an absolute lock as it once looked. According to an AV variant that mixes raw aggregation with peak performance, Polamalu’s current mark is below that of the average Hall of Famer, as well as the threshold that would typically give a player a coin flip’s chance of making the Hall by historical standards.

If healthy, Polamalu could probably still have positively contributed to some team in a limited role next season, but that’s a moot point now. With the 2014 season representing the last we ever see of Polamalu, it’s worth wondering what might have been if he’d been able to stay injury-free these past three years.