I have switched from calculating our trendline adjustment based on a weekly aggregation of polls to one instead based on daily numbers. The methodology otherwise remains the same.

The reason for the change is simply that based on some experimentation, the daily calculation appears to be a little bit more robust — it fluctuates less from day to day as new results are added. This is also how Professor Erikson had suggested that I perform the trend calculation originally. The daily method does tend to give more deference to national tracking polls in extracting its trendlines, but since Rasmussen and Gallup are interviewing literally tens of thousands of voters between them each week, I’m not sure that this is a bad thing.

As a side benefit, the daily version of the trend adjustment seems to produce a cooler-looking graph: 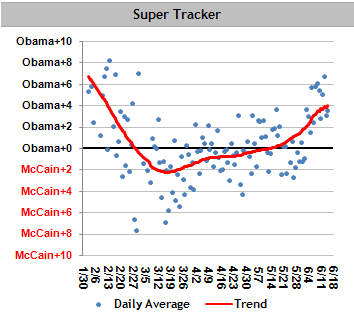