A lot of pundits are out with columns today in which they express with certainty that the passage of health care reform last night will doom — or save — the Democrats. But Intrade, the largest political betting market, sees considerably more ambiguous effects.

The chart below tracks the daily close of the ‘Obamacare’ contract at Intrade — which has been live since January 21st — and compares it against the contract representing a GOP takeover of the House. The correlation is positive (and statistically significant) but the magnitude of the effect is small: Intrade infers that Republicans would have had a 40 percent chance of taking over the House had the Democrats not passed Obamacare, but about a 47 percent chance now that they have. 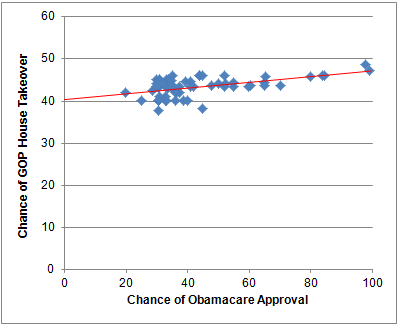 Correlation, of course, is not causation, and there have been other news stories that broke during this period — as well as the impact of fresh polling, etc. Nor are these markets especially liquid. So this is just one piece of data — out of many — to consider. But it suggests that health care — or at least, the Democrats’ decision to continue pushing health care following Scott Brown’s victory in Massachusetts — may be a relatively minor factor in terms of the midterms. Actually, check that — it does not necessarily mean the impact is minor so much as that it is uncertain. Passage of the bill might have been a high-risk, high-reward strategy, possibly affecting a large negative impact on the Democrats but also potentially a large positive one.

In any event, if you told the Democrats that the price of passing their health care bill was to go from having a 40 percent chance of losing the House for two years to a 47 percent chance, do you think they would have done it? I think they almost certainly would have; that implies just a 1 in 14 chance of losing the House when they wouldn’t have otherwise.

The markets do not reveal any relationship between the passage of Obamacare and the GOP’s chances of taking over the Senate (although the regression line slopes downward, it is not at all statistically significant.) 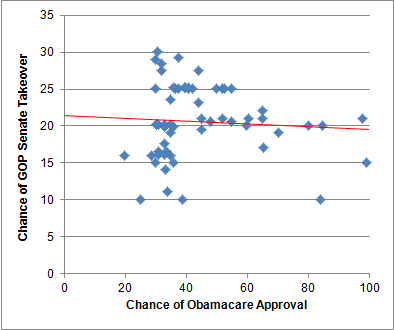 Looking at the Senate data is more problematic because the GOP’s path toward a takeover is so tenuous that the contract may be substantially impacted by ‘shocks’ in the form of news from individual Senate races. Still, over the course of the past 10 days — when Obamacare has gone from about a 50 percent chance of passing to near 100 percent — the chance of a Senate takeover has actually declined some in the market’s estimation. It’s not necessarily impossible that the Democrats could experience differential effects in the House and the Senate, since the House has had the tougher vote to cast (and gotten nearly all the attention) post-Scott Brown. Moreover, several Democrats in tough districts had to flip from no to yes in order for the House to pass its bill; this won’t be true when the Senate votes on its reconciliation package, since the Democrats already maxed out with 60 yea votes for health care in December.

The market also shows some correlation between the Obamacare contract and the Democrats’ chances of retaining the Presidency in 2012, which it implies have declined from 59 percent to 55 percent as a result of the bill: 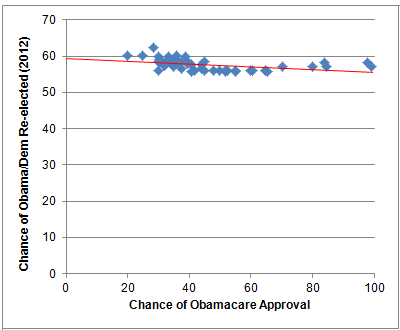 One last caveat: we should probably separate out the Democrats’ decision to push forward with health care from their success in actually managing to pass it. If, for instance, the Democrats had pushed on health care, had seen several vulnerable House members commit or re-commit to a yes vote, and then had seen the effort collapse at the last minute, it seems a hard case to make that they would have been better off. But if you want to make the electoral case that the Democrats should have mothballed health care after Massachusetts and given up on comprehensive reform to focus instead on more popular measures, that’s a different story.