Yesterday, I raised the question of why Democrats approve of the current Democratic-controlled Congress at lower rates than Republicans did when they controlled the Congress. This asymmetry, particularly in the short term, could merely be the byproduct of disappointment with a perceived disconnect between what Democratic voters thought they were voting for in 2006 and 2008, and what they are getting.

Taking a larger view, that asymmetry is quite possibly the function of a broader and even more enduring asymmetry, one rooted in the very foundational ideas that Democrats and Republicans take toward government–and compounded by the demographic differences between the two coalitions. 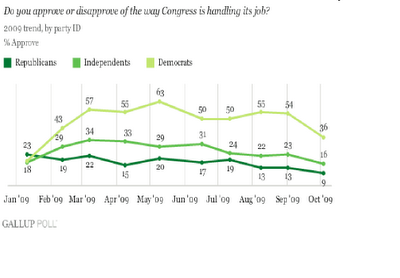 Pollster Celinda Lake spoke to first, and perhaps most crucial point in her email reply to me. “It’s easier to unify Republicans because mostly they want to stop things. It’s harder to unify people when you want to do things.” (emphasis added) Therein lies the broader asymmetry: Doing nothing is a single thing, whereas doing something implies many options. And it is easier to build consensus around a “nothing” menu of 1 than it is for a more variegated menu of limitless options of “something.”

This is, I grant, not a particularly profound observation. Indeed, the idea that the status quo ante enjoys an advantaged position is a core assumption in social choice theories–especially as they apply to American politics, what with its separation of powers and supermajority rules and other constitutional and extra-constitutional rules and strictures designed to slow progress. That reality remains true regardless of the prevailing distribution of political attitudes, their intensity, and so on: It is an ineluctable fact in American politics it’s hard to do something, but even harder to reverse or undo or change course once it’s done. (Need I provide historical evidence on this point as the nation discusses a major policy initiative that has been churning through the public policy hopper for the better part of six decades now?)

Uniquely compounding this problem for Democrats is the nature of their coalition, which is of course more heterogeneous in demographic terms. Pollster Karl Agne: “The other dynamic here, of course, is the relative diversity of Democrats (age, race, region, ideology) and the relatively monolithic nature of the Republican base, as covered in our focus group report*. I think it’s a factor as well, but impossible to quantify.” (*That report is “The Very Separate World of Conservative Republicans,” which I recommend reading.)

OK, so Democrats are tougher to please because they hold more complex and varied designs on the government, compounded by the fact that they are a more heterogeneous coalition. But what does this mean for our understanding of contemporary politics?

Well, for one thing, we ought to be careful not to overstate Democratic disgruntlement and its significance. Given the expectation that the more activist and change-oriented, as well as more demographically heterogeneous party, is therefore more difficult to keep together, it does not necessarily follow that Democrats are therefore enamored with their opponents’ ideas about doing nothing. Both parties are trying to herd cats, and the Democratic herd is more prickly. But they remain two different breeds, and moving from one herd to the other is not the logical consequence of the refusal to be easily herded with your own.

And if this is true it means that core disgruntlement among Democrats, because it is artifactually higher, should not be overestimated. It should not be inferred that Democrats are headed for a colossal collapse in a way that the Republicans would if their approval of a Republican-controlled Congress were at the same levels.

Finally, Democratic support may also rebound. “I would fully expect to see Democratic approval rise again once health care reform passes and then, perhaps even more importantly, Congress begins to tackle other aspects of the Obama agenda,” Agne predicts. Indeed, if you look at the more current Gallup poll numbers from 2009, as depicted above, sure enough, Democrats’ support for their Democratic-controlled Congress seemed to have bounced back to around 50 percent and stabilized for most of this year–until a big dip this month. (Not sure why that drop is so sudden, and Nancy Pelosi and Harry Reid ought to proceed with caution.) In any case, support has never risen to the 60-to-70 percent levels we saw for Republicans in the middle of this decade. But given the asymmetric nature of the two parties’ coalitions and their demands and expectations for government action, the Democrats’ cat-bounce (terrible pun, I know) since 2007-08 is not too bad.