How come Democrats don’t like a Democratically-controlled Congress as much as Republicans do when they control Congress? I hadn’t realized this was even a phenomenon, nor whether it matters. But then, while doing some other research, I stumbled upon this little graph of results from Gallup: 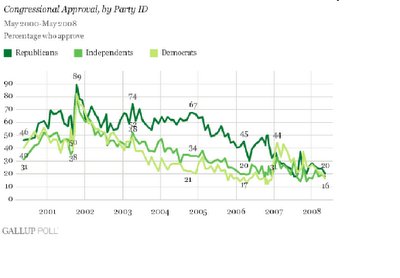 If you look at the trend lines, the Congress was more popular when the Republicans were the majority in the first six years of this decade. That might seem surprising enough. But if you look closer, it’s clear that Republican support prior to 2007 was higher than Democratic support after the takeover. What’s going on here? To wit, a few possible theories to consider:

1. It’s the economy, stupid. It could just be that the state of the economy and Americans’ anxieties about their economic situation is dragging down the Democratic numbers. But that explanation fails to account for two things. First, the Republicans historically tend to receive lower approval numbers in the “whom do you trust to handle the economy?” polling questions. A year into control of Congress, with George Bush still president, Democrats were more trusted to handle the economy, according to Gallup. But now, at least according to Rasmussen, and since this past summer, Republicans are. And second, and relatedly, it would be one thing if Congressional numbers tanked post-black September (2008), but the Democratic-controlled 110th Congress didn’t have much better numbers prior to that.

2. It’s the pan-ideological populist revolt. You know, if the social issue divide between working-class conservatives and working-class liberals in this country is ever healed, the business and political elites had better watch out. The anger and disappointment that greeted the Bush Administration’s bailout, followed by the Obama Administration’s giant stimulus package, is palpable. And because both those decisions were approved, respectively, by the 110th and 111th Democratic Congresses, Democrats are suffering accordingly.

3. Democrats didn’t get the Congress they thought they voted for. I checked in with several pollsters to solicit their explanations for this phenomenon. Republican pollster Neil Newhouse’s answer seems plausible enough: “It’s clear that since Democrats took back Congress a few years ago, their partisans have been anxious for their newfound majority to flex its muscles and exert their will. But, reality has set in. And, that’s clearly frustrated the Democratic rank-and-file across the country. Current data showing strong disapproval of the Democratic-led Congress by rank-and-file Democrats could be given voice as follows: I realize that when Democrats first took control of Congress, Bush was still President, and Congress, even though dominated by Democratic partisans, had their hands tied. But now, with Obama as president and increased majorities in Congress, you’re still not getting stuff done that I care about? And, when are you guys (expletive deleted) gonna focus on what we need most—jobs! You wanted complete control, and that’s what you finally have. And this is what we get?!

Democratic pollster Karl Agne echoed this sentiment. “During the first years of the GOP Congress, Republicans were primarily motivated by opposition to Clinton, which the GOP Congress delivered consistently. Then, during the (almost uninterrupted) six years of a Bush White House and GOP Congress, you could count on one hand the instances of dissonance between them. The GOP Congress marched in lockstep and gave Bush (and the GOP base) pretty much everything asked of them. It was DeLay’s classic ‘majority of the majority’ approach, executed very efficiently,” he wrote to me by email. “Democrats, on the other hand, have yet to see much of the change they voted for in ’06 and ’08. Opposition to Bush got Democratic support up some, but the complete sense of paralysis in ’07 and ’08 and attitudes about the direction of the country limited how high their support would go.”

The Newhouse-Agne take is a solid situational explanation for the asymmetry in partisan support by Republicans and Democrats for their respective majorities over the past decade or so. But is there something more systematic at work here?